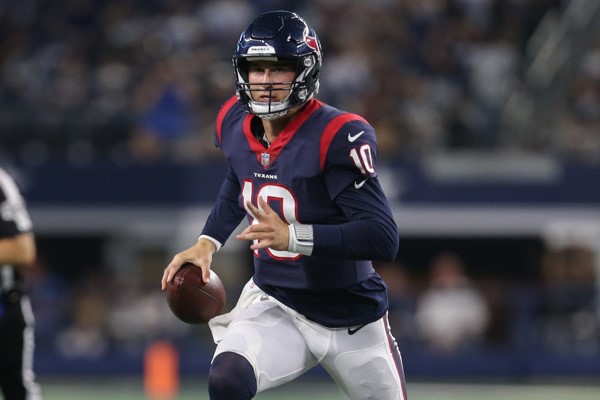 A Round 3 rookie, Mills was thrown into the fire early on. He flopped — predictably — on an offense that didn’t provide much support.

Given another chance late in the season, though, Mills flashed starter-quality ability.

But that was as a passer. Mills posted only 44 rushing yards across 13 total appearances.

That lack of rushing upside — and a still largely unproven supporting cast — keeps the young passer buried in the ranks.

Texans HC Lovie Smith says he's a fan of QB Davis Mills. "If you look at all of my comments about Davis, I am a believer in him and what he's going to do," Smith said Monday, according to NFL.com. "If you just go back and look at the plays that he made, throwing the ball downfield last year, so many good things that he did, and that's as a rookie." Smith also sounds confident in Mills leading the 2022 offense. "The improvement that you see from year one to year two is normally a big improvement, and that's what we're gonna get from him." Words don't necessarily mean commitment, of course. And we'll see whether Houston adds a QB at any stage of the upcoming NFL Draft. But combine Smith's comments with what had to be considered an impressive debut for a 3rd-round pick in a bad offense, and we're betting Mills leads Houston's offense for at least the coming season. He's available very late in early fantasy football drafts and not highly rated in dynasty right now.

Lovie Smith has been named Texans HC. He has 11 seasons of NFL HC experience -- 9 with the Bears, 2 with the Bucs -- compiling an 89-87 record. Smith left the NFL from 2016 to 2020 to coach Illinois, where he went 17-39. He returned to the pros this past year to serve as Texans DC. Houston is expected to promote passing-game coordinator Pep Hamilton to OC, according to NFL Network's Mike Garafolo.

The Texans fired HC David Culley and OC Tim Kelly. These guys were set up to fail with an expansion-level roster and might have actually overachieved by winning 4 games this season. GM Nick Caserio is expected to tap into the Patriots pipeline for his next HC.

Mills will start rest of season

Texans HC David Culley named QB Davis Mills his starter for the rest of the season. "He gives us the best chance to win," Culley said, suggesting that QB Tyrod Taylor's wrist injury didn't factor into this decision. Taylor has struggled lately -- but Mills managed just 6.6 yards per attempt with 6 TDs vs. 7 INTs in 6 starts earlier this season. WR Brandin Cooks at least averaged 8.2 targets, 6.2 catches and 62.5 yards in those Mills starts. Cooks remains the only Texan worth using in fantasy lineups.

Mills beat expectations as a Round 3 rookie -- especially considering the poor environment in Houston. The Texans showed some confidence in the Stanford product by not taking a QB in the 2022 draft. Next year, however, will bring a larger group of high upside, draft-eligible passers (Bryce Young, CJ Stroud and a host of others). Mills, while promising, could face starting competition in 2023.