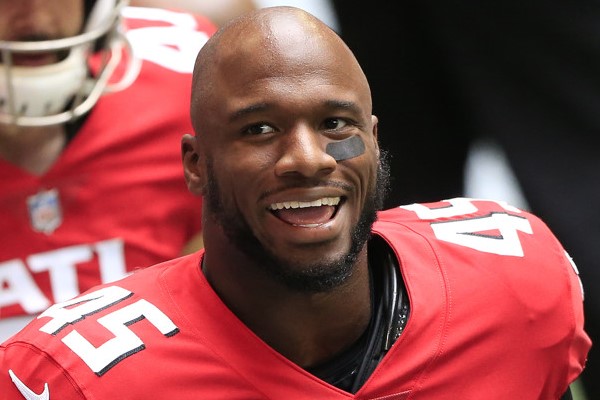 Jones OUT vs. Jaguars

Falcons LB Deion Jones is questionable for Sunday's game against the Jaguars. He didn't show up on the injury report until Friday, when a shoulder injury limited his participation. We'll check his status Sunday morning.

Jones a full-go for Week 13

Falcons MLB Deion Jones put in a full practice Friday and didn't even appear on the final injury report for the week. HC Dan Quinn has praised Jones' work in practice the past couple of weeks, and the team website reported Friday that Jones isn't expected to see his snaps limited. There's still some risk in Jones' 1st game back, but Atlanta brought him back patiently from the Week 1 foot injury. And there's more than enough upside to make Jones worth a shot in IDP lineups. We've added Jones to the top 12 of the Week 13 LB rankings.

The Falcons on Monday activated MLB Deion Jones from IR. He had been out since suffering a foot injury in Week 1 that required surgery. HC Dan Quinn told the Atlanta Journal Constitution he doesn't yet know if Jones will be ready to play Dallas this Sunday. “We’ll have the same format that we had last week,” Quinn said. “We’ll take it step by step and see where he’s at. It’s too early to make a prediction of where he could be. He’s eligible to be back this week, but that doesn’t mean he’s ready. We will put him out there when he’s 100 percent.” Until then, Foye Oluokun is the main guy in the middle. IDP owners should go ahead and add Jones now where available, though. He'll undoubtedly take the MLB job back over when he's ready and is a top-5 fantasy LB when healthy.

Falcons MLB Deion Jones returned to practice Wednesday after missing the past 8 games with a foot fracture. The Atlanta Journal-Constitution reported that Jones tested the foot off to the side last week, so Wednesday's participation sounds like an upgrade. If he continues to build on that, Jones would be eligible to return in Week 11. He's worth a pickup in many IDP leagues now on the mere chance.