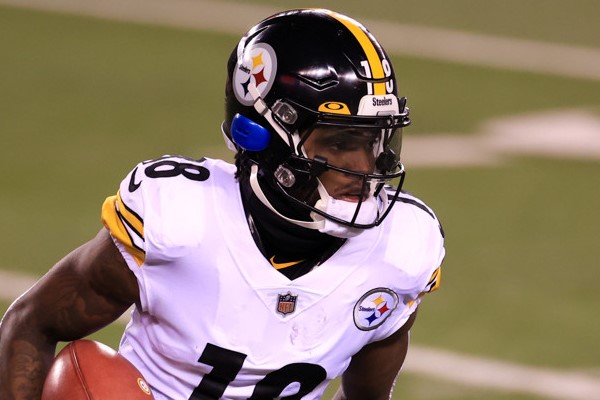 Johnson has become a target hog through his 3 seasons in Pittsburgh. That volume drove WR1 performance in 2021. The switch at QB, additions at WR and potential for growth in Chase Claypool (maybe?) could ding that share. There’s potential for Johnson to also add depth to his targets with Ben Roethlisberger gone, but any loss of target volume would likely hurt Johnson more than Claypool because of the way he has scored points so far. And even if his role remains similar, we’d bet on some loss in total pass volume for an offense that passed at the league’s 4th-highest rate last year. Some downside risk has been baked into Johnson’s ADP, which finds him 15th among WRs in FFPC best-ball drafting as of this writing; 18th in Underdog drafts. Both numbers still sit a little ahead of our projections for Johnson, though. He’s still OK to consider in that range but isn’t a target player for us at cost.

Steelers WR Diontae Johnson racked up 11 targets among 28 Kenny Pickett pass attempts in Sunday's win over the Falcons. That marked a 39.3% target share, in a game that saw no other Steeler top 5 looks. TE Pat Freiermuth finished 2nd, catching 3 of 5 targets for 76 yards. RB Jaylen Warren was the only other Pittsburgh player to catch more than 1 pass. WRs George Pickens and Steven Sims matched Warren at 2 targets. Pickens caught just 1 ball for 2 yards. Next for Pittsburgh comes the season's 1st matchup with the Ravens, who have been playing the run tougher than the pass.

Pickens solid vs. Cincinnati, could have had more

Steelers WR George Pickens caught 4 of 6 targets for 83 yards and a TD in Sunday's loss to the Bengals. He had 2 other targets wiped out by penalties, 1 an offensive hold and the other a defensive PI. Pickens also dropped a 2nd-half deep ball that would have added significant yardage to his line. WR Diontae Johnson matched Pickens' 4 catches but tallied just 21 yards. Next comes a potential pass-funnel matchup with the Colts and then the soft Atlanta defense.

Steelers TE Pat Freiermuth doubled his nearest teammate in targets in Sunday's loss to the Bengals. His 12 looks accounted for 28.6% of Pittsburgh's total pass attempts. Freiermuth's 8 catches also doubled the nearest Steeler, while his 79 yards trailed WR George Pickens' team lead. It's the 2nd 8-catch game among the past 4 for Freiermuth, who has seen 7+ targets in 4 straight and 7 of his 8 healthy outings for the year.

Steelers WR Diontae Johnson caught 4 balls for 63 yards on 5 targets to lead a lackluster passing effort in Sunday's win over the Saints. TE Pat Freiermuth tied Johnson for the team lead in catches. RB Jaylen Warren and WR George Pickens checked in next at 3 receptions apiece, with rookie TE Connor Hayward the only other Steeler to catch multiple passes. Week 11 brings a Bengals defense that has been better than New Orleans'.

Can Kenny Pickett or Mitchell Trubisky become a long-term QB solution? Questionable. But we believe in the former 3rd-round pick who has dominated target share in Pittsburgh the past 2 years. Only Stefon Diggs, Davante Adams and Cooper Kupp amassed more total targets than Johnson over that span.