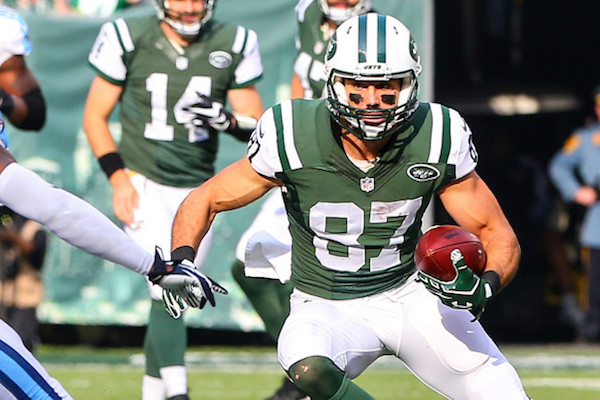 Andy Hart of the Patriots' website calls WR Eric Decker "far from a lock to make the roster," adding that "the veteran still doesn't seem comfortable." Of course, you can still take a late shot on Decker in fantasy football drafts this weekend if you'd like, in a WR corps that will miss Julian Edelman for the 1st 4 weeks. But Phillip Dorsett and Cordarrelle Patterson are better bets to make the final roster if you're looking for a late upside pick.

The Patriots have signed WR Eric Decker. The 31-year-old is clearly past his prime, averaging just 10.4 yards per catch in Tennessee last year. But he was still a reliable possession receiver, hauling in 65.1% of his targets. He finished a decent 48th among 116 WRs in Pro Football Focus' 2017 receiving grades. "Decent" is all Decker needs to be to have a shot at early-season fantasy value in New England. He'll compete with Kenny Britt, Phillip Dorsett and Cordarrelle Patterson for snaps behind Chris Hogan while Julian Edelman serves his 4-game suspension.

Titans WR Eric Decker will miss the team's 3rd preseason game with an ankle injury, HC Mike Mularkey said. It's not ideal for a guy coming off an injury-wrecked season and settling into a new offense, but we've heard nothing to suggest that Decker is in danger of missing the start of the regular season. He's fine to draft as a WR3 at his 9th-round ADP.

The Titans have agreed to a 1-year deal with WR Eric Decker. The former Jet gives QB Marcus Mariota a talented, steady veteran presence. Decker shouldn't keep Corey Davis from reaching the top of the WR depth chart if the rookie proves ready to do so, but he'll cut into the available targets and certainly make it tough for Rishard Matthews to deliver another fantasy-starter line. Decker could also block 3rd-round WR Taywan Taylor from turning into a fantasy surprise this season. We'll see this summer just how healthy Decker is coming off groin and shoulder surgeries at the end of last year. But he reportedly looked good in Jets OTAs before his release. Another receiving weapon makes Mariota even more attractive around the fringe of QB1 territory in fantasy football drafts.