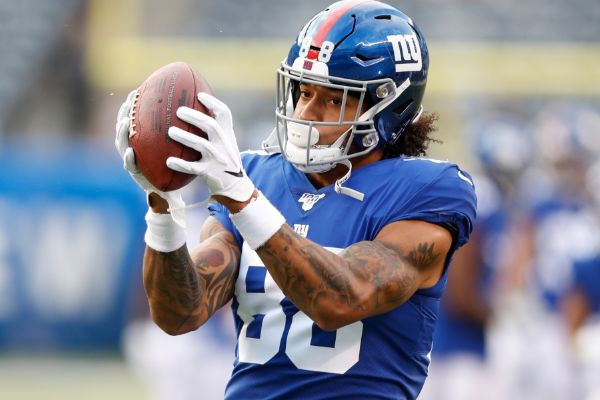 Week 13
Engram caught 4 balls for 61 yards in the bad loss to Miami in Week 13. He was targeted 5 times and seemed to be one of the few things clicking for the Giants. That included a wonderful one-handed diving catch to show that he still has a nice catch radius. The strangest silver lining of it all… Evan Engram leads the Giants in TD receptions with 2! Truly pitiful offense.
This is another Giants offensive player you can throw into the dirty clothes hamper because the team simply is playing awful team football. They are already at a disadvantage with a terrible line, but now that QBs Daniel Jones and Mike Glennon are to miss more time, it is the doomsday scenario for all players wearing blue. Stay away.
Week 12
Engram totaled 37 yards on 3 receptions in the Giants’ win over the Eagles. He ranked 2nd on the team with 6 targets, trailing only WR Kenny Golladay’s 7 on the day. Two of those misses took place in the red zone, with one of them almost producing a score.

Engram has looked better in recent weeks and may have a shot at better target counts under new play-caller Freddie Kitchens. We’ll have to see it before trusting Engram above mid-TE2 level in fantasy, though.
Week 11
Engram was targeted 5 times and finished with 2 receptions for 12 yards in the blowout loss to the Buccaneers. Nothing was working for the Giants offense all game as QB Daniel Jones struggled to get anything working. Engram was a target a couple times in the red zone, but there was no real chance for him to paint one on the scoreboard.
Engram had been building some nice momentum in the offense with a score in two straight heading into this one, but once again he was foiled by poor QB play and conservative play calling. It’s still baffling that a player of his athletic ability is buried in an offense starving for a spark. The woeful season continues as the Giants host the Eagles this weekend.
Week 9
Engram caught 3 balls for 38 yards, including a beautiful 30-yard TD on the opening drive. QB Daniel Jones noticed the mismatch up the sidelines and threw a gorgeous ball to allow Engram to go get it. Engram didn’t provide much more after that, but it was 2 games in a row with a score. All things considered and with how the rest of the game played out, Engram looked good. And it’s nice to see him getting more involved in the offense. He still could be one of the biggest mismatches on the field at any given time, so maybe this is a trend moving forward. It’s more natural to be apprehensive about picking him up—especially with a Week 10 bye looming—but he should at the very least be on the radar.

Week 8
Engram finished the Week 8 loss with a 3-15-1 stat line on 4 targets. Engram didn’t do much until his TD in the 4th quarter. In fact, he had 0 targets before his 5-yard score gave the Giants a 17-14 lead over the Chiefs. He later added a few more catches, as the Giants attempted a late comeback in Kansas City.

The 4 targets matched his season low, despite a season-high in snap share (78%). Engram has finished 3 of the past 4 games over 70%.

Unfortunately, it appears that OC Jason Garrett is set on limiting the speedy TE’s role, which caps his fantasy contributions.
Week 7
Engram caught 6 balls for 44 yards in the big win for the Giants over the Panthers in Week 7. He was targeted 8 times (2nd on team) and looked healthy throughout. Both his targets and receptions are season highs to this point.
Engram hasn’t shown much life in the Giants offense this year, and it doesn’t help that he was unhealthy to start the season. As the games go on, however, he looks to be regaining form and nice chemistry with QB Daniel Jones. We have still yet to see the big target find pay dirt, but he takes on a Chiefs defense who has allowed a receiving TD to an opposing TE in 4 straight. This could be a decent DFS week with his price tag lower than other options out there.
Week 6
Engram caught 3 balls for 24 yards in the Week 6 dismemberment of the Giants at hands of the Rams. He was targeted 5 times and was a relative non-factor as the Giants offense was practically non-existent.
Engram is still easing back into game action, but he isn’t doing much with the time on the field. He looks good and healthy for the most part. He just gets lost in the game plan. It’s unfortunate to see him not reach his potential. He’s just a floor play in fantasy lineups if you’re hurting at TE.
Week 5
With their WR corps hemorrhaging injuries, New York opened the game with 3 TEs on the field. Nevertheless, for much of the game, we wondered where Engram was. When backup QB Mike Glennon finally found the TE late in the game, he caught all 4 targets for 55 yards. TE Kyle Rudolph, another once-valuable fantasy TE on the downside of his career, was targeted only once 1 target for 14 yards

With very few veteran skill-position players available, the Week 6 Giants QB, whether Daniel Jones or Mike Glennon, almost must be able to see and find Engram and Rudolph. They should still be able to get open and keep the chains moving.
Week 4
Engram caught 5 of 6 targets for just 27 yards in the Week 4 OT win over the Saints. Only WRs Kenny Golladay and Kadarius Toney saw more targets. Engram did most of his damage in the flats but wasn’t much of a fantasy factor overall.

Engram grew his playing time from 56% of snaps in his Week 3 return from the calf injury to 68%. We’ll hope to see that continue trending upward, which could only help his target outlook. Hamstring injuries for Sterling Shepard and Darius Slayton don’t hurt that area either.
Week 3
Engram was activated for the first time this year and finished the Week 3 loss with a 2-21-0 stat line. He was targeted 6 times, but unfortunately it didn’t translate into much production for the Giants tight end. It’s worth noting that 4 of QB Daniel Jones’ 9 incompletions went in Engram’s direction. If Engram can get going he would fill a major void in a Giants offense that has been lackluster at best so far this season. This is probably his last real shot at making an impact for the Big Blue before they move on from him. He will have to get things started in New Orleans. Targets at least have the potential to increase with both Sterling Shepard and Darius Slayton dealing with hamstring injuries.

If the Giants returned similar personnel from 2020, then it would be easier to forecast a bounce back for Engram. But they added significant pass-catching pieces, including a TE they’ll pay $7 million this year. On top of that, Saquon Barkley returns after missing 14+ games. And even Sterling Shepard lost 5+ to injuries last season. Engram’s best hope is that the Kyle Rudolph signing signals more 2-TE sets. Rudolph arrives off playing almost exclusively inline, whereas Engram gets deployed more like a receiver.

Engram could still rebound enough statistically to finish among the top-12 at a volatile fantasy position. But he’ll have trouble approaching last year’s target share, which adds risk.

Giants TE Evan Engram (calf) is active for today’s game against the Panthers. He was added to the injury report and sidelined on Thursday before returning to a limited practice on Friday. Engram is a high-risk Week 7 fantasy play.

Giants TE Evan Engram (calf) is expected to play vs. the Panthers today, barring a setback in pregame warmups, according to ESPN's Adam Schefter. Engram seemingly aggravated his calf injury in Thursday's practice and then was limited on Friday. He's a risky Week 7 fantasy play.

Giants TE Evan Engram (calf) is listed as questionable for this weekend's game against the Panthers. He was added to the injury report and sidelined on Thursday before returning to a limited practice on Friday. Engram will be a high-risk fantasy play if he ends up active on Sunday.

Giants TE Evan Engram did not practice on Thursday due to a calf injury. He missed the first 2 games of the season with a calf, although it's not confirmed that this is related. Regardless, he now looks iffy for this weekend's game vs. the Panthers. Check back tomorrow for another update.

Giants TE Evan Engram (calf) is active for today’s game against the Falcons. He remained limited in practice all week and is a risky fantasy play until we know that he’s back to 100%.