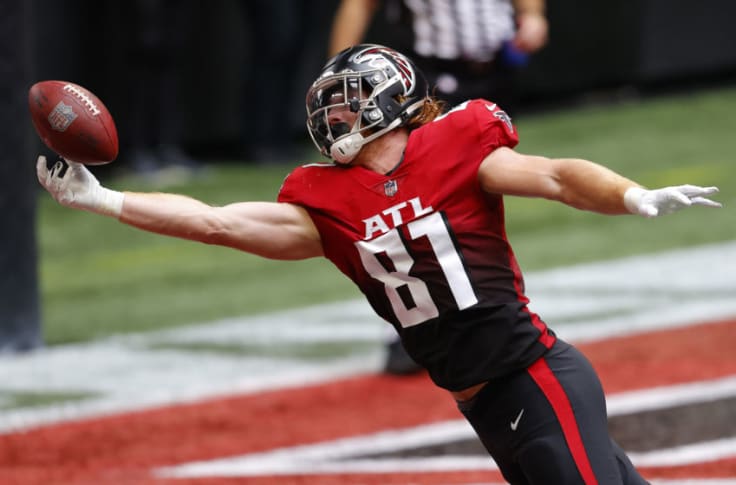 Week 5
Hurst caught 4 balls for 40 yards and a score in the Week 5 victory over the Jets. His TD in the 2nd quarter put the score at 17-0 before the Jets made it a game later. It was Hurst’s 3rd game with 4 receptions and his 1st score of the year.

Even with Calvin Ridley and Russell Gage out, Hurst still drew just 11.1% target share. He also fumbled twice -- losing 1 -- and was even bobbling the ball a bit as he crossed the goal line for his TD. Hurst has fumbled 3 times over just the past 2 games.

The overall ugliness at TE in fantasy this year might make Hurst more relevant, but he’ll need to do more than 2.6 receptions and 20.6 yards per game before he’s worth serious consideration.

2021, though, looks like a year for sharp regression. Kyle Pitts is a clear upgrade, and even at 20, he projects as an immediate contributor. The Julio Jones trade helps Hurst, but the latter will still need some good fortune to have a legit shot at cracking TE2 range.

Hurst out for Week 11

Falcons TE Hayden Hurst (ankle) is out for Thursday night's game vs. the Patriots. Hurst has played 52% of Atlanta's offensive snaps this season but averaged just 2.8 targets per game, so there's not much fantasy impact here.

It was easy to write off Falcons TE Hayden Hurst after the team drafted Kyle Pitts 4th overall and declined the 5th-year option on Hurst's rookie contract (making this the final year on his deal). But Matt Urben of Falcons Wire says to "look for Hurst to be a featured player" in the offense this year, which is expected to deploy multiple TEs as part of the plan to replace WR Julio Jones' production. We'll have to see just what Hurst's role looks like, but we saw HC Arthur Smith use Jonnu Smith and Anthony Firkser simultaneously with last year's Titans. The biggest draw to Hurst is an ADP that will find him undrafted in most fantasy football leagues.

Tori McElhaney of The Athletic reports that Falcons TE Hayden Hurst has shed 18 pounds vs. last year's playing weight (down to 250). Hurst -- who had his 5th-year option declined by the team this offseason -- still appears headed for a significant role in the offense. McElhaney writes: "Because of [Arthur] Smith's scheme, there are just as many opportunities for Hurst as [Kyle] Pitts. And if training camp is any indicator, we'll see both of them on the field together a lot." That's worth keeping in mind as you navigate reserve TE territory in best-ball drafts. Hurst sits just 27th among TEs in current FFPC best-ball ADP.

Falcons TE Hayden Hurst (ankle) is active for today’s game vs. the Raiders. He only got in a limited practice on Friday, so he obviously won't be at 100%. But Hurst might get a target boost with WR Julio Jones out.

Falcons TE Hayden Hurst (ankle) is expected to play Sunday against the Raiders, according to ESPN's Adam Schefter. Hurst managed only a limited Friday practice after sitting out the previous 2 days, so he'll present some risk even if active. Las Vegas also rates 9th in TE coverage, according to Football Outsiders. We'll confirm Hurst's status when the early-game inactives come out.