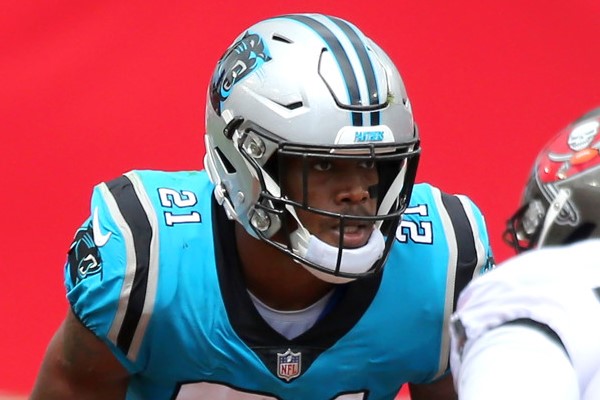 All that's missing for Chinn so far is the fantasy numbers. They'll come, and they could start this week. He and the Panthers get rookie QB Davis Mills in his emergency 1st start.

Chinn ranked 5th among all DBs in total tackles and led all rookies -- across positions -- in that category in 2020.

He spent that debut campaign at LB, though, and now is expected to play much more safety. Just how different his role truly is remains to be seen.

"Obviously he would be a big safety and he would be able to cover tight ends," Rhule said back in June. "He can go fit the run too. It's rare to have a guy that big, with that size and that intelligence level. He's one of those guys that can fill a lot of different roles for us."

We'll go ahead and bet on Chinn staying around the ball plenty. And he arrived after a college career of cross-category production: 6.4 tackles per game, 13 career INTs and 31 passes defensed.

Panthers S Jeremy Chinn is active for today's game against the Buccaneers. Chinn missed last week with a knee injury but should be back in IDP lineups today. CB Donte Jackson (toe) is also active. He hit the day questionable.

Panthers S Jeremy Chinn is questionable for Sunday's game against the Buccaneers. Chinn closed out the week with a full Friday practice, so he seems likely to return after missing Week 8. We'll check his status Sunday, though.

Panthers HC Matt Rhule said Monday he hopes to have S Jeremy Chinn back in the lineup for Week 10. Chinn missed Sunday's loss to the Chiefs with a knee injury but managed 2 limited practices and hit the weekend questionable. We'll watch his participation this week, leading up to Sunday's game against the Buccaneers.

Chinn OUT vs. Chiefs

Panthers S Jeremy Chinn (knee) is inactive for today's game against the Chiefs.

Panthers S Jeremy Chinn (knee) is questionable for Sunday's game against the Chiefs. He missed practice Wednesday but returned for a pair of limited practices. If he's active, we'd start him in a matchup that should keep him busy. We'll check his status Sunday morning.