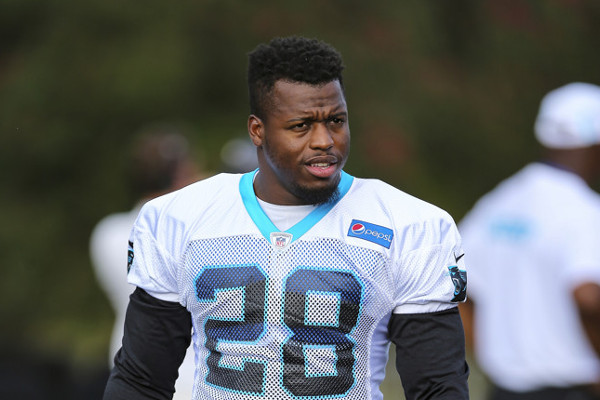 The Giants have placed RB Jonathan Stewart (foot) on IR. This is just about the end for the 31-year-old. RB Wayne Gallman had already emerged as the handcuff to Saquon Barkley.

Giants RB Wayne Gallman is questionable to return to Sunday's game against the Jaguars with a knee injury. He'd been serving as Saquon Barkley's backup. Jonathan Stewart will step into that role for however long Gallman is out.

NJ.com's Matt Lombardo believes Wayne Gallman -- not Jonathan Stewart -- has the "inside track" to win the Giants' #2 RB job. Lombardo notes Gallman's burst, elusiveness and pass-catching ability as edges over Stewart, who looked like "a plodding veteran running back trying to hang on" this spring. It's a situation we'll monitor when training camp opens, but neither guy is worth a pick outside of deep best-ball drafts. The bigger takeaway here is that rookie Saquon Barkley is already entrenched as the Giants' feature back.

The Giants selected Penn State RB Saquon Barkley with the 2nd pick of the 2018 NFL Draft. Barkley checks all the boxes. He was a dual-threat over the past 3 seasons, totaling 3,843 rushing yards and 43 TDs on 5.7 yards per carry, plus another 1,195 yards and 8 scores on 102 receptions. The tape shows a home run hitter with plus, plus pass-catching ability. Barkley looks like some sort of cyborg mix between Barry Sanders and David Johnson. He went to the Combine and measured 6’0, 233 pounds and recorded a 98th percentile SPARQ score. The cherry on top is that he just turned 21 in February. Barkley is the 5th RB to be selected inside the top 10 picks over the past 4 years. The 4 previous — Todd Gurley, Ezekiel Elliott, Leonard Fournette and Christian McCaffrey — all finished their rookie seasons as top 10 PPR RBs. Even behind a shaky offensive line in New York, Barkley will have a good shot to make it 5-for-5. He’ll have volume on his side in a backfield that includes only Jonathan Stewart, Wayne Gallman and Paul Perkins.

Jonathan Stewart, RB UNS There is no dynasty data for this player.