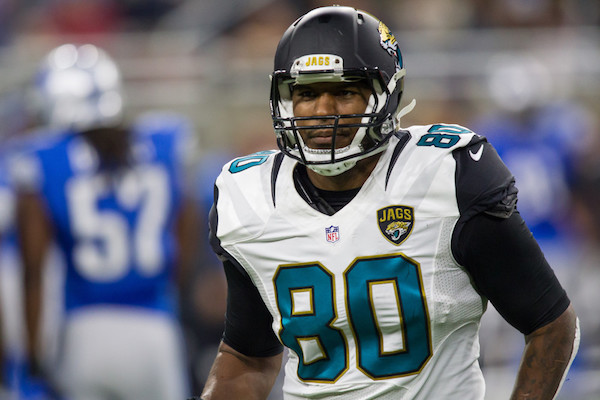 The Dolphins on Wednesday released TE Julius Thomas. The veteran spent just 1 year in Miami, catching 41 balls for 388 yards and 3 TDs across 14 games. He now hits the open market heading into his age-30 season, with a fairly significant injury history. We're not expecting much from Thomas going forward.

The Dolphins have placed TE Julius Thomas on IR with a foot injury. He was reportedly hurt early in last week's loss to the Bills but played through it. Thomas has still never played a full 16-game season. His absence leaves Anthony Fasano and MarQueis Gray as Miami's top 2 TEs. Neither is a fantasy option. The 4.4 targets per game Thomas was averaging figure to be spread between the WRs and RB Kenyan Drake.

The Jaguars have traded TE Julius Thomas to the Dolphins in exchange for a 2017 seventh-round pick. This went from Thomas-for-Albert to no trade to Thomas-for-a-pick in the past 12 hours. Thomas disappointed in Jacksonville, missing 11 games and averaging just 35 yards in the other 21 over the past 2 seasons. He, of course, dealt with inconsistent QB play from Blake Bortles. Whether he's getting an upgrade in QB Ryan Tannehill is debatable. Thomas is at least reuniting with Adam Gase, who was Denver's OC when Thomas scored 24 TDs between 2013 and 2014. Turning just 29 in June, there's some bounce-back potential. But fantasy owners shouldn't bet more than a late-round pick on it.

Multiple outlets are reporting that the Jaguars and Dolphins are working to finalize a Julius Thomas for Branden Albert swap. In Miami, Thomas would be reuniting with Adam Gase, who was the Broncos' OC when Thomas tallied 24 TDs across 2013 and 2014. Of course, QB Peyton Manning also had plenty to do with that. Thomas wouldn't enjoy that level of QB play with the Dolphins, and he'd be battling for targets with DeVante Parker and possibly Kenny Stills behind #1 WR Jarvis Landry. The trade would still leave Thomas as just a TE2 flier in 2017 fantasy drafts, but consider a move to Miami a slight upgrade to his fantasy stock. The deal is reportedly contingent on both Thomas and Albert restructuring their contracts and passing physicals. It can't be made official until the start of the new league year on March 9.

Update: Insider Armando Salguero reports that Jacksonville will be sending Miami a 2018 draft pick, not Thomas, in exchange for Albert. Thomas could still find himself on a new team this coming season. He's due to make $6 million in 2017 on his current deal.

Jaguars TE Julius Thomas (back) has been placed on IR. He'll end up missing the final 6 games of the season with an injury we still don't know much about. Thomas has never played a full 16-game season. He finishes 2016 with 30 catches for 281 yards and 4 TDs. His 9.4 yards per catch was a career low, which probably says more about Jacksonville's passing game than Thomas' skills at this point. He'll only be 29 when the 2017 season kicks off but won't be more than a TE2 in drafts.