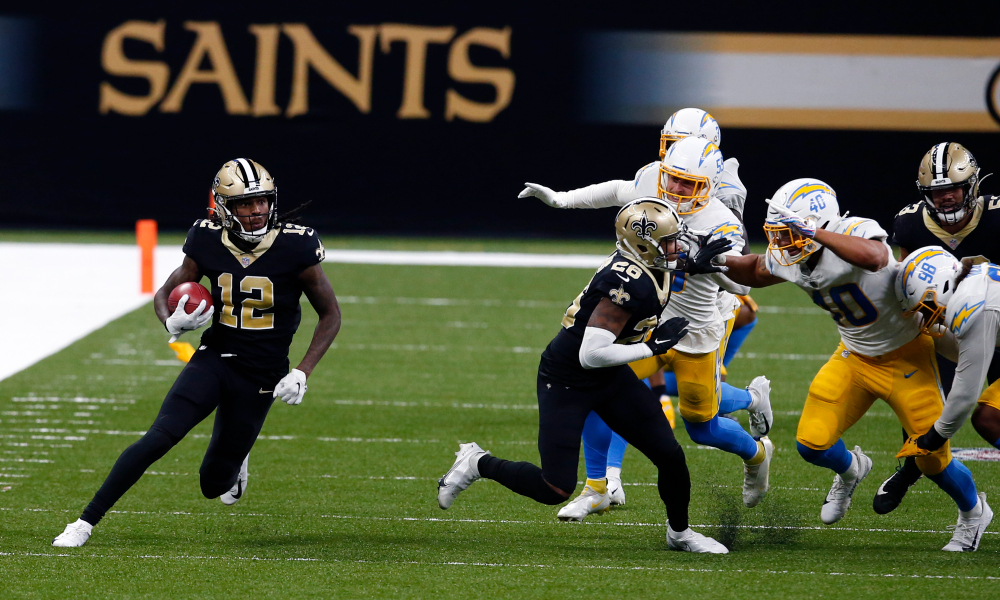 Week 13
Callaway caught only 1 of 4 targets for 13 yards against Dallas. That was his second-lowest yardage total this season. He has been targeted 4 or more times in each of the last 8 games but has had a catch percentage greater than 50% in just 3 games.
WR Deonte Harris has been suspended for 3 games and WR Kenny Stills was released after catching none of 5 targets and having 1 pass go off his hands for a Dallas INT. That leaves Callaway as the leading active receiver for New Orleans with 28 catches for 409 yards and 6 TDs. He already has played on at least 60% of the snaps in every game. Callaway also may take over some of the punt and kickoff returns that Harris was taking. The Saints have been going through WRs as if they were QBs. Too soon?
Week 12
Callaway, like the entire Saints offense, was mostly ineffective throughout the Thanksgiving night loss to the Bills. The Saints tried to utilize Callaway on deep routes and underneath options but were unable to get much going all night. He ended up 5th on the team in targets with only 4. It was a disappointing night for Callaway who finished up the night with 2 catches for 24 yards. This was the first week since week 8 that Callaway was unable to get into the endzone. However, a QB change could be occurring this week which may help Callaway bounce back for the Saints and fantasy managers. We have Callaway ranked as our WR75 this week against Dallas. The Cowboys’ secondary has allowed over 450 yards to opposing WRs over their last two games. The next three games on the schedule for the Saints are DAL, @NYJ, and @TB.

Week 7
The looming return of Michael Thomas should be a welcome sign for all Saints players as they will all benefit from his presence. Callaway has been solid this season but seems a bit overmatched as the top WR on a team. With the return of Thomas, he should benefit from the attention Thomas gets on the opposite side of the field. Tre’Quan Smith returned in Week 7 and immediately took over as the primary slot WR. This talent boost should increase the scoring opportunities for Jameis Winston and Alvin Kamara rest of season.
For Week 8, Callaway makes for an interesting start as the Saints take on a Buccaneers defense that has allowed the 3rd most points to outside WRs. Coming off a game where he still saw 6 targets, Callaway is on the WR3 map this week.
Week 5
Callaway’s 4-85-2 line turned out to be highly misleading. One score came on a Hail Mary pass before halftime. The other came on a total busted coverage from 12 yards out. In total, Callaway’s 8 targets matched Alvin Kamara’s total for the team lead. That’s certainly encouraging, but note that Michael Thomas could return over the next few weeks. Callaway is a borderline hold in 12-team leagues, especially with New Orleans entering a Week 6 bye.
Week 4
Callaway made the most of his 2 receptions by chalking up 72 yards, including a 58-yard gain on the first play in the 2nd half to set up a score. Callaway added a 14-yard reception as well but was otherwise quiet in the Saints offense. The 72 yards is the 2nd-highest single-game total in Callaway’s young career.

He could be a flyer for DFS lineups this weekend against Washington’s secondary that has given up 5 TDs to WRs over the past 2 weeks.
Week 3
The preseason darling finally broke through in Week 3 with a 4-41-1 line. Callaway hasn’t been the sleeper we thought he’d be, but his usage is encouraging. Callaway has paced the Saints in routes, targets, and receptions at the WR/TE position so far in 2021. The production hasn’t been there mostly because the Saints average 21 pass attempts per game. That pass volume is not sustainable as we should see that volume go up. This will lead to a lot more productive days for Callaway in the coming weeks.
In Week 4 the Saints take on the Giants, who have allowed the 10th most points to the WR position in 2021. This includes allowing double digit fantasy points to the opposing teams #1 WR in three straight weeks. Callaway isn’t a must start, but if you need a flex option, he isn’t a bad play in Week 4.
Week 2
It’s been 2 games and 2 duds for this preseason darling. Callaway actually ranked 2nd on the Saints in targets on Sunday … but he saw only 4 looks, catching 2 for 8 yards. An inaccurate and indecisive Jameis Winston — combined with an upstart Carolina defense — made this a recipe for disaster. An unfortunate COVID situation within the Saints’ coaching staff also forced the team to go undermanned on the sideline — and it showed. We wouldn’t give up on Callaway quite yet. He still led all Saints WRs in routes, and Michael Thomas isn’t due back for several more weeks. But Callaway is best left on benches for a Week 3 date at New England.
Week 1
On a day where the Saints only attempted 20 passes it is hard for anyone to find production. Callaway led the team in routes, running one on 91% of Jameis Winston’s drop backs. The issue for Callaway is he only generated 2 targets and 14 yards receiving on the week. Callaway is still a hold as he saw a lot of Packers top CB Jaire Alexander and should have more luck vs. the Panthers, who allowed 2 TDs to Corey Davis last week.

Saints WR Marquez Callaway caught 5 balls for 104 yards in Monday night's preseason game against the Jaguars. That included a 43-yard TD on a play that drew a defensive pass-interference call, as well as a 1-handed reception or 29 yards. "Every time the lights turn on, [Callaway] does an amazing job," QB Jameis Winston said afterward, per Pro Football Talk. In addition to WR Michael Thomas being out, the Saints have also gone without WR Tre'Quan Smith in each of the 1st 2 exhibitions. The team also lost TE Adam Trautman to injury against Jacksonville. Callaway seems to be seizing the opportunity and should open the season in New Orleans' starting lineup. He looks like the best bet to lead Saints WRs in targets while Thomas is out.

Multiple Saints beat writers mentioned on Friday how good Saints WR Marquez Callaway has looked in training camp so far. "He really has impressed as a potential WR 1/2 so far," ESPN's Mike Triplett tweeted. With both Michael Thomas (ankle) and Tre'Quan Smith (leg) currently sidelined, Callaway is getting a big opportunity as the de facto #1 WR. And it sounds like he's taking full advantage. We'll see when Smith is able to get back on the field. But with Thomas expected to miss the first handful of games, Callaway has a chance to be a fantasy factor.

The Saints have designated WR Marquez Callaway to return from IR. He missed the past 3 games after landing on IR Dec. 5 with a knee injury. Callaway played 17 snaps or fewer in each of his past 4 appearances and saw just 2 total targets over that span. He posted an 8-75 receiving line on 10 targets the game before that, though. It's too late in the season for Callaway to be a real option in season-long fantasy football leagues. There's a chance he becomes a sneaky DFS option if activated over these final 2 weeks, though. The 22-year-old makes for an interesting dynasty stash as well.

Saints WR Marquez Callaway limped off with a lower-body injury in the 4th quarter of Sunday's win over the Panthers. He was surprisingly busy and productive before exiting, hauling in 8 of 10 targets for 75 yards. We'll look for an update on his injury.