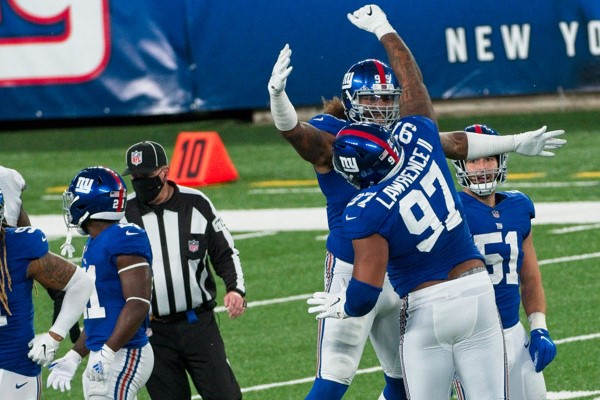 Giants D-linemen Austin Johnson (foot) and Leonard Williams (triceps) are questionable for Sunday's game against the Cowboys. Johnson put in just a limited Friday practice after missing the 1st 2 days. He's coming off a season-high snap share in the loss to the Chargers. We'll see about Johnson's status Sunday. Williams managed limited practices all week, despite initial reports that the Giants feared his season might be over. Losing either player would further ding an already weak run defense and shaky pass rush.

The Giants have placed rookie LB Tae Crowder on IR with the hamstring injury he suffered in Sunday's win over Washington. That will keep the rookie out for at least 3 games. He's not worth holding in IDP leagues. The team filled Crowder's spot on the roster by signing Jabaal Sheard off Jacksonville's practice squad. Sheard will line up at OLB for the Giants but might carry DL eligibility in many IDP leagues. That makes him worth watching. The Giants recently lost starting OLB Lorenzo Carter for the season to an Achilles' tendon tear. Kyler Fackrell has become a full-time player at the position in recent weeks, but Markus Golden has struggled to stay in the lineup. Sheard's addition might also mean that Oshane Ximines will need more time to recover from the shoulder injury that landed him on IR 2 weeks ago.

As expected, the Giants have officially ruled S Jabrill Peppers (ankle) out for Sunday's game against the Rams. DB Julian Love (ankle, knee) is questionable for the game. We'll check his status Sunday morning.

Giants LB Alec Ogletree (back) is active for today's game against the Eagles. He's a lower-level IDP option. CB Sam Beal (shoulder) is inactive, leaving an already terrible secondary without a starter. Slot CB Corey Ballentine (back) is active after arriving questionable.

New York Giants, DEF NYG There is no dynasty data for this player.