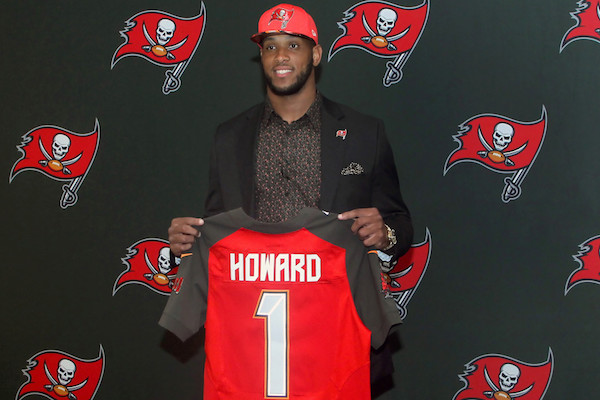 -In Week 5 of last year, he suffered a torn Achilles that ended his season.

-That math doesn’t account for Antonio Brown joining the team for the final 8 games. AB, Chris Godwin, Mike Evans and Rob Gronkowski (plus Cameron Brate) all return for 2021.

-Translation: Don’t expect Howard to take back the lead role. It all starts with getting healthy for the contract-year TE, who’s expected to participate at the start of training camp (per HC Bruce Arians).

Howard’s high on talent. He’s only 26, and he’s showed flashes of TE1 production in parts of 4 pro seasons.

Injuries have simply halted his progress. And now he’ll attempt to come off an ultra-serious torn Achilles. Howard will need a Rob Gronkowski injury to become a viable TE1 streamer.

Bucs TE O.J. Howard remains on track in his recovery from October's torn Achilles. “Yeah, he’s really close now,” HC Bruce Arians said. “He looks fantastic working out every day.” Howard is tentatively expected to be able to get some work in during June minicamp and sure seems to be trending toward being ready for Week 1. Anything QB Tom Brady and the Bucs get from him this year will be a bonus. Note that Howard out-targeted Rob Gronkowski 19 to 14 over the first 4 games of last season.

Bucs TE O.J. Howard has been setback-free so far in his recovery from October's torn Achilles, HC Bruce Arians said Tuesday. Arians added that Howard is "real close" to getting back to pre-injury form, although that seems optimistic for an injury that often takes a year-plus to return from. It does sound like he has a good chance to be ready for the start of the 2021 campaign. It's worth remembering that Howard out-targeted TE Rob Gronkowski 19 to 14 over the first 4 games of last season.

Howard done for the season

Bucs TE O.J. Howard will miss the rest of the season with his Achilles injury, according to NFL Network's James Palmer. Howard had been playing a significant role, tallying 19 targets through 4 games. His absence should mean more action for TEs Rob Gronkowski and Cameron Brate, plus Tampa's WRs.

Howard out with Achilles injury

Bucs TE O.J. Howard suffered an Achilles injury in the 4th quarter of Sunday's game vs. the Chargers. He was carted to the locker room and quickly ruled out. That doesn't bode well. We'll update Howard's status when we know more.

Bucs TE O.J. Howard (ankle) put in a full week of practice and isn’t listed on the final injury report. Ditto for TE Cameron Brate (ribs), who should be back to his usual role after being limited to 11 snaps last week. Howard is the ultimate risk/reward Week 10 fantasy play against the Cardinals’ 32nd-ranked TE defense.