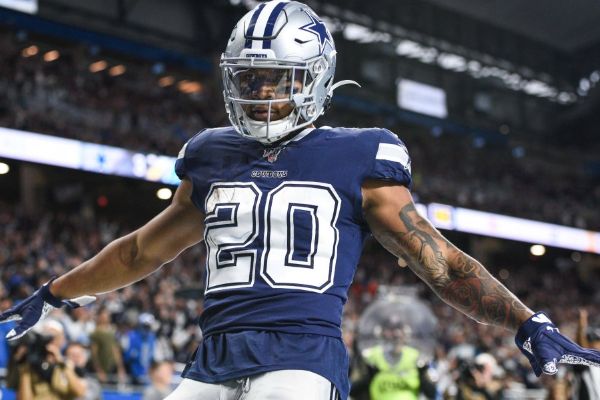 We wouldn’t be surprised to see another slight uptick in Pollard’s workload, but the Dallas backfield remains under Ezekiel Elliott’s control. Pollard looks like 1 of the few handcuffs worth targeting in fantasy drafts, but beware overpaying for a guy who likely won’t start for you unless Elliott goes down. Pollard is currently going inside the top 40 at RB in FFPC best-ball drafting, at the Round 9-10 turn.

Cowboys RB Tony Pollard (foot) was a full participant in Wednesday's practice. That's confirmation that he'll be available for Sunday's Wild Card game vs. the 49ers.

Pollard "ready to roll" for Wild Card Round

Cowboys EVP Stephen Jones said Monday that RB Tony Pollard (foot) will be "ready to roll" in Saturday's Wild Card game vs. the 49ers. It's confirmation that Pollard was held out of the regular-season finale as a precaution. Pollard averaged 7.7 carries and 3.7 targets over his final 3 games and is likely looking at a similar workload in the playoffs.

Pollard out for Week 18

Cowboys RB Tony Pollard (foot) has been downgraded to out for Saturday night's game vs. the Eagles. It's unclear if he suffered a setback with that foot or is just getting some rest with Dallas having already won the NFC East. Even with Pollard out, don't expect the Cowboys to overwork RB Ezekiel Elliott on Saturday. Corey Clement will mix in as the #2 RB.

Cowboys RB Tony Pollard (foot) is active for today’s game vs. the Giants. He’ll be playing through a partially torn plantar fascia in his left foot, so his role and effectiveness are in question. Pollard is a risky fantasy play today.

ESPN's Adam Schefter reports that Cowboys RB Tony Pollard (foot) is expected to play vs. the Giants today. But Schefter adds that, "Dallas could have a slightly more cautious approach with him" as he battles that partially torn plantar fascia. It's tough to project exactly how much work Pollard will get today, making him a risky fantasy play.