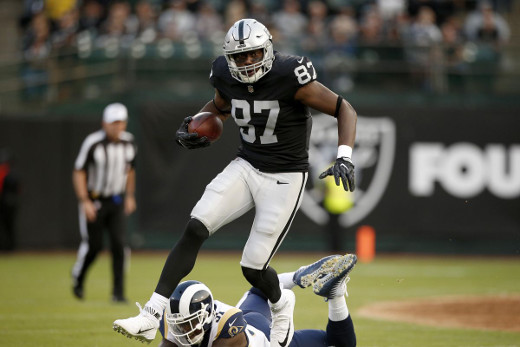 The Chargers have agreed to a 1-year deal with TE Jared Cook, worth up to $6 million, according to multiple reports. Cook, of course, spent the past 2 years in New Orleans, where his targets dipped but his efficiency spiked. Cook posted 2 of his 3 best yards-per-catch rates with the Saints and scored on 20% of his catches. He faces plenty of opportunity with the Chargers, who allowed TE Hunter Henry to walk in free agency. Cook should face some competition from 23-year-old Donald Parham, but his arrival should also knock Parham's best-ball ADP down from its recent rise. Cook is heading into his age-34 season, so some decline in his performance is certainly possible.

The Saints released TEs Jared Cook and Josh Hill. The Cook move was just a formality, with his contract set to expire later this month anyway. He gets a head start now on finding his next employer. The soon-to-be 34-year-old remained effective last season, posting a 37-504-7 line on 60 targets. Hill saw just 10 targets last year, so his departure doesn't move the needle. But the moves in tandem open the door for 2020 3rd-rounder Adam Trautman to take over as New Orleans' starter. He's a 2021 breakout candidate.

Saints TE Jared Cook (groin) is active for tonight's game against the Chargers. He was limited in practice all week after missing Week 4, so Cook is a risk/reward fantasy play. TE Adam Trautman is a healthy scratch tonight.

Saints TE Jared Cook (groin) is expected to play against the Chargers tonight, according to NFL Network's Tom Pelissero. Cook was limited in practice all week after missing Week 4, so he'll carry elevated risk in fantasy lineups.

Saints TE Jared Cook (groin) is listed as questionable for Monday night's game against the Chargers after a limited week of practice. With the late kickoff, you're better off looking elsewhere for your starting TE this week.