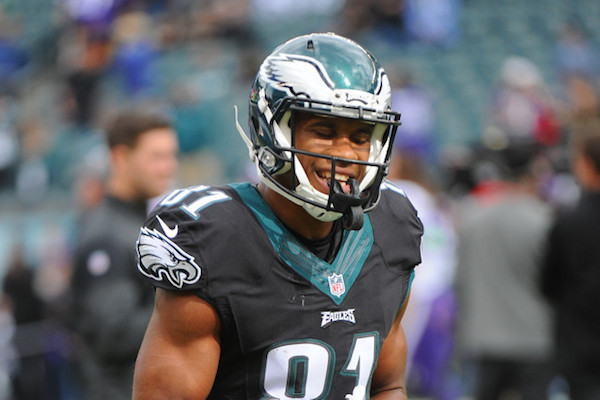 The 49ers have agreed to a deal with Jordan Matthews. The former WR for multiple teams -- San Francisco, most recently -- has added weight and is transitioning to TE. He joins a crowd at his new position. Besides George Kittle, San Francisco sports TEs Ross Dwelley, Charlie Woerner, MyCole Pruitt and Josh Pederson. Odds seem against Matthews even making the regular-season roster, but we'll see where this goes. He should at least face an easier transition than Logan Thomas did from QB. Matthews turned 29 in July.

The Eagles have released WR Jordan Matthews. This comes just a day after he played 96% of the offensive snaps in the loss to Seattle. The move suggests that the Eagles expect at least 1 of Alshon Jeffery and Nelson Agholor back for Week 13.

The Eagles have signed WR Jordan Matthews. He opened his career in Philly from 2014 to 2016 and also spent 2018 there, so he has some familiarity with QB Carson Wentz and HC Doug Pederson. Matthews has struggled with injuries in recent seasons, but if healthy could push WR Mack Hollins for snaps down the stretch. We wouldn't bother adding Matthews to fantasy rosters right now, though.

The 49ers have signed WR Jordan Matthews to a 1-year deal. The 2014 2nd-rounder racked up 225 catches and 2,673 yards over his first 3 NFL seasons. But he's mustered just 45 grabs and 582 yards across the past 2, dealing with injuries and playing for 3 different teams. Matthews turns just 27 in July, though, and is capable of playing both outside the numbers and in the slot. There's opportunity for him to carve out a significant role in San Francisco amid a largely unproven WR corps.

The Eagles have signed WR Jordan Matthews. A 2nd-round pick by Philly back in 2014, Matthews averaged 75 catches, 891 yards and 6.3 TDs across his first 3 seasons. He was a non-factor after being shipped to Buffalo last year and then was cut by the Patriots after injuring his hamstring in August. Matthews is still just 26, though, and was a fantasy asset just a couple of seasons ago. There's opportunity in Philadelphia with WR Alshon Jeffery still sidelined and WR Mike Wallace now on IR. Matthews is worth monitoring -- and maybe even adding as a flier in deep fantasy leagues.