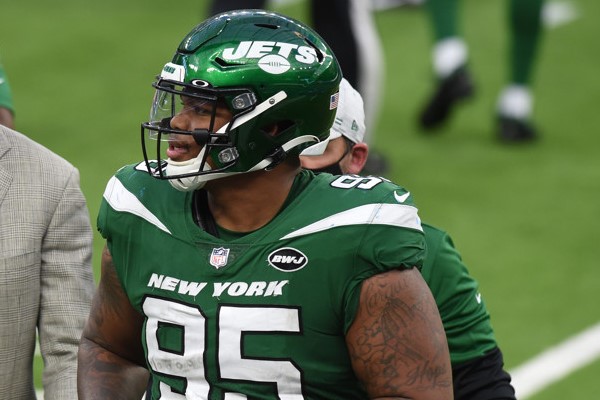 The Jets have placed DT Quinnen Williams on the COVID list, knocking him out for today's game against the Jaguars. That's a big loss for a defense that was already a positive matchup for Jacksonville RB James Robinson.

Jets DT Quinnen Williams suffered a shoulder injury in Sunday's loss to the Dolphins. We'll see about his outlook for Week 16 and beyond.

The Jets have activated DT Quinnen Williams off the PUP. Williams opened training camp still working back from his offseason foot fracture. There's still time for him to round into shape before the Sept. 12 opener. We'll keep an eye out for any recurring or compensatory issues with Williams from here.

The Jets are placing DL Quinnen Williams on IR with a neck injury, according to ESPN's Adam Schefter. That ends a breakthrough season for Williams, both in real and IDP terms. Trevon Coley -- who the Jets claimed off waivers from the Cardinals last week -- looks like the next man up. He could be a sleeper for some tackle numbers against the Browns -- and would get an even better matchup with the Patriots in Week 17. But it's a little late in the fantasy season to make such a bet with your IDP lineup.

Jets DT Quinnen Williams sustained a concussion in Sunday's win over the Rams. He'll need to pass through the protocol before returning to play. We'll see whether he has a shot to face the Browns on Sunday, but you'll have to make sure you secure an alternate plan for your IDP lineup this week.