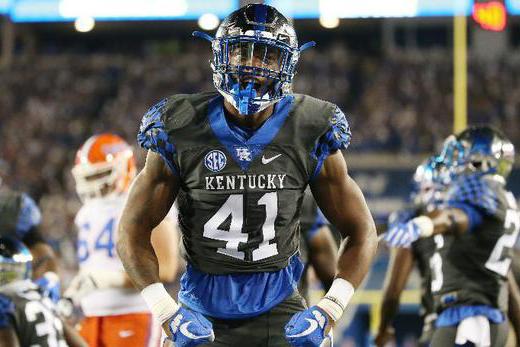 Sorry I didn't get this posted earlier.

I started tracking Speed Scores for EDGE prospects in the NFL Draft back in 2017, because it became apparent that speed matters for that position. Unfortunately, this year's Combine coincided with the start of a family vacation.

But despite the delay, we're still mining the results so that we can gain an advantage in our rookie drafts in IDP dynasty fantasy football leagues -- or even just find some sneaky sack candidates for IDP use in general.

In his cross-position study of how production and measurables correlate to early NFL success (which I've referred to in a couple of other recent articles), Rotoworld's Hayden Winks also found speed central to projecting early success for pass rushers. In his study, only 3-cone times correlated (slightly) more strongly to early pro success for sub-270 pound EDGE players than their speed score from the NFL Scouting Combine. Speed + agility.

Move beyond 270 pounds, however, and that correlation falls down the list, behind vertical, bench press, broad jump, weight and tackle-for-loss production.

That makes sense, of course. The bigger a player is, the less likely he is to rely heavily on his speed. And yet, being an explosive athlete (vert, broad) will always help when you're trying to beat the mammoth in front of you by getting off the ball quickly, shooting gaps and disrupting backfield action.

Let's start here with the full list of speed scores, though, from the EDGE and DL groups at the Scouting Combine. Although speed matters most for EDGE players, some guys such as Ohio State's Nick Bosa (266 pounds) and Eastern Michigan's Maxx Crosby (255) worked out in the DL group despite pretty clearly fitting the "EDGE" category.

Since we know more now than we have before about the factors that can reveal early NFL success, let's add some layers to what we've learned about these prospects so far.

The Combine gave us 11 EDGE types who checked in under 270 pounds and delivered above-average 3-cone drill times for the position.

It's not surprising to see Bosa and Allen here, along with rating above-average in speed score. Both players appear likely to go among the NFL Draft's top 5 overall. Sweat has blossomed into a sure 1st-round pick at this point as well, and Burns has already appeared late in many Round 1 mocks.

Others in this group will bear watching in the middle-to-late rounds of the draft. Hollins, Crosby, Winovich, Banogu and Davis all checked in among the top 12 in speed score. Ximines posted a below-average speed score. Smith didn't run the 40 at the Combine.

It's also worth noting that Charleston's John Cominsky delivered the group's 5th-quickest 3-cone time (7.03 seconds) at 286 pounds. As you already saw above, he added that to the larger group's 3rd-best speed score. And we can't chalk that totally up to a higher weight inflating the number. Cominsky ran a faster 40 than Bosa despite carrying 20 more pounds. He clocked the 12th-fastest 40 among all 48 EDGE + DL prospects who ran at the Combine. We'll get to Cominsky's production in a bit.

Meanwhile, Rashan Gary's 7.26-second 3-cone rates 66th percentile among D-linemen but below average if you compare him instead with EDGE players.

Winks' study found greater correlations between final-year stat production and early NFL success for the bigger guys than the 270-and-under group. Same deal for DTs. So let's take a look at some production winners among the bigger guys.

1. John Cominsky, DE, Charleston
Cominsky managed only 2.5 sacks in his final college season but led the whole DL/EDGE class in 2018 tackles for loss per game (2.06).

3. Gerald Willis, DT, Miami
One of 14 Combine participants who checked in at 300+ pounds, Willis closed out an embattled college career with 1.5 tackles for loss per game in 2018, tied for 10th most among all DL/EDGE players in the class. He also checked in 15th in solo tackles per contest.

4. Quinnen Williams, DT, Alabama
Williams spent just 1 season starting for the Crimson Tide but made the most of it. He averaged 1.3 tackles for loss and 0.5 sacks per contest, along with 3.0 solo tackles per outing.

5. Khalen Saunders, DT, Western Illinois
Saunders' 3.8 solo tackles per game in 2018 ranked 4th among all DL/EDGE participants at the Combine. The 324-pounder also averaged 1.2 tackles for loss and 0.6 sacks per game as a senior. No one in the class beat his total of 127 career solos. Saunders topped 30 each of the past 3 seasons. Oh yeah, and he can do a back flip.

What about the little guys?

Correlations aside, college production certainly can't be a bad thing for a player we're hoping will produce in the pros. So let's check the top performers in some key categories.

Tackles for loss per game

We'll work more with the numbers as we get to NFL Draft time and actually look at ranking these incoming rookies for rookie-draft purposes.