Can Dak Prescott finally rebound tonight? He should be in a good position to do so.

The Washington defense has improved from early in the year, when it checked in worst in the league. But it’s still not good.

Look back on Football Outsiders’ DVOA ratings for Washington’s pass D over the past 5 games. Just 1 (highlighted) rates as over league average (the “O” and “A”). That, of course, came in the 1st meeting with Dallas – easily Prescott’s worst performance of the year.

Ian Rapoport reports that the Dallas QB has been spending extra time after practice working on timing with his wideouts. At least as importantly (and perhaps more): Washington will be missing some key pass-defense pieces this time around.

S Landon Collins landed on IR this week with a foot injury. He had been spending more time in slot coverage since Week 6 – according to Pro Football Focus – so Collins’ absence can only help WR CeeDee Lamb and TE Dalton Schultz. CB William Jackson III is out as well, weakening Washington’s coverage on the outside.

It’s also worth noting that top CB Kendall Fuller is coming off a bout with COVID. There’s at least a chance that affects his performance.

We’ll see whether Prescott and his pass-catchers are better prepared to take advantage of the matchup this time around. For now, though, let’s check the value charts … 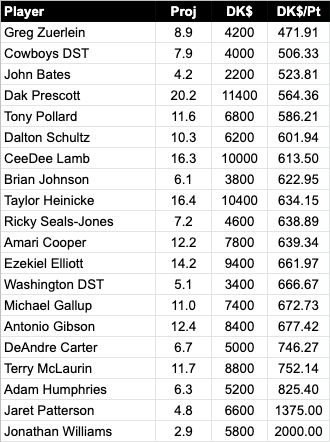 This game doesn't look stocked with low-cost sleepers, so it'll be a matter of mixing and matching the Cowboys skill-position players -- and perhaps guessing who scores a TD on the Washington side. We'll need to watch to see whether Antonio Gibson is active for this game, of course. Both Jaret Patterson and Jonathan Williams gain some intrigue if he's out. Each guy also appears to be priced up, though, and the matchup isn't great.

Your best bet on the Washington side -- since you have to play someone from each team -- might be WR Cam Sims. He's not a sure enough bet for targets to land among our projections this week. But Sims has scored twice this year and trails only Dyami Brown and Terry McLaurin in average depth of target. So he carries some boom/bust appeal. 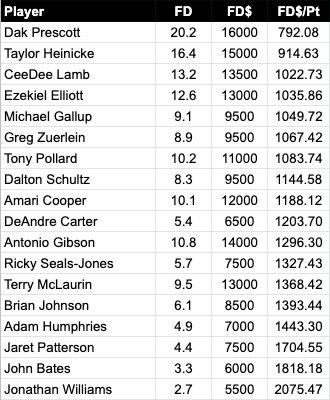