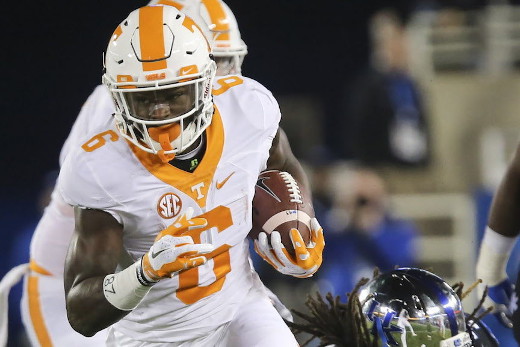 A decorated high school player from Georgia, Kamara’s college career began at Alabama. Unfortunately, he never played a single down for the Crimson Tide.

Tennessee gave him another shot at SEC life ahead of the 2015 season. New to the program, Kamara saw limited work (10.8 touches per game). But he proved efficient with 6.5 YPC — 3rd among SEC qualifiers — and ranked 2nd on the team in catches (34). Pro Football Focus also charted him with an impressive 41 missed tackles forced (1 every 3.4 touches).

Still, Kamara was a part-timer. In fact, he didn’t exceed 18 carries in any game with Tennessee. That helped him remain efficient last year with 5.8 YPC and 9.8 yards per catch — an increase of 1.2 yards from 2015.

The 215-pounder missed 2 midseason games with a meniscus injury and a sprained LCL. But he showed well over the final 4 games, posting 2 TDs 3 times.

Kamara’s a tough study given the lack of tape available. The light workloads over the past 2 seasons at least allow him to enter the pro ranks with minimal tread off his tires. That’ll certainly be noted by NFL front offices.

Assuming his medicals check out, it’s tough to point out a glaring weakness in Kamara’s game.

He’s a one-cut-and go type of back, and he can shift from 0 to 60 in a hurry. We see that in the first 2 clips. Give him a crease, and he can make defenders look silly.

It’s an awful display of tackling from Vanderbilt, but the play lines up with Kamara’s elusiveness. He displayed reliable hands no matter where he lined up on the formation.

Kamara adds draft value with his return ability. He averaged 10.1 yards per punt return for his career (28 opportunities) and scored once.

A small sample size of college production adds volatility to Kamara’s outlook. When given touches, though, he quietly performed like a top-end college back. High on talent, Kamara has the size, burst and receiving ability to excel at the next level. And he's not an older prospect, turning just 22 on July 25. He’s squarely in the Round 1 mix in rookie drafts. 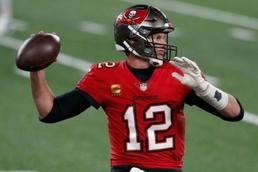 Can Tom Brady reverse his struggles against the Saints?