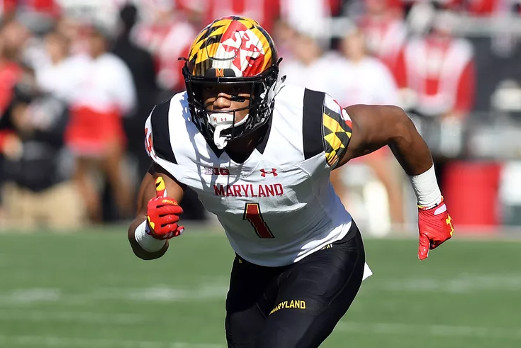 Moore’s college numbers need context. He played for Maryland squads that never ranked better than 102nd in passing yards or 92nd in passing TDs. (There were between 128 and 130 FBS teams during the past 3 years.)

As an 18-year-old true freshman in 2015, Moore tied for the lead in receiving TDs and ranked 2nd in catches and yards for a Terrapins team that totaled just 2,092 passing yards and 15 TDs.

Moore’s numbers climbed across the board the following year. He led the team in receiving yards and TDs while tying for 2nd in catches. (The leader caught 43.) That Maryland squad finished with 2,317 passing yards and 15 TDs, giving Moore a nice 27.5% share of the receiving yards and 40% of the TDs.

Moore posted eye-popping market share numbers this past season. His 1,033 yards represented 53.2% of the team total. He accounted for 8 of the 15 receiving TDs and 45.7% of Maryland’s receptions. Here’s how those numbers stack up against the rest of this year’s top WR prospects:

Moore’s 80 catches set a Maryland single-season record. The 1,033 yards were good for 3rd in school history. And he did it all with 4 different QBs.

Just how impressive was Moore’s 2017 considering the circumstances? Get this: He averaged 7.95 yards per target vs. just 4.82 for the rest of Maryland’s pass-catchers. That 64.94% difference ranks 4th best among 26 of this year’s top WR prospects. Moore’s 2.78 yards per route run ranked 16th among 133 draft-eligible WRs, according to Pro Football Focus.

He was named Big Ten Receiver of the Year, First Team All-Big Ten and a Second Team All-American.

Moore lined up all over the formation for Maryland. I saw him wide right, wide left, in the slot and even in the backfield. (He carried 17 times for 125 yards and 1 TD over 3 college seasons.)


And he ran a wide variety of routes at all levels of the field.

Moore has the agility and burst to get open in tight areas and the speed and leaping ability to win deep.

He’s also a threat with the ball in his hands. Moore averaged 7.0 yards after the catch for his career, according to Pro Football Focus. He’s slippery in the open field and also runs with surprising tenacity.

Moore is a bit inconsistent in contested situations. I saw him lose a few 50/50 balls, but he also flashes the potential to become a weapon in that department.

(This ball is thrown a tad too far outside to allow Moore to get down in bounds, but check out the leaping ability, timing and body control.)

Moore checks all the boxes:


Production - A 1,033-yard, 8-TD 2017 season on a bad Maryland passing game, giving him some of the most impressive market-share numbers in the class.

Film - Can line up inside or out and win at all levels of the field with agility, burst, speed and leaping ability.

Toss in the fact that Moore is relatively young, and he appears to have 1 of — if not the highest — ceilings in this WR class. We’ll see when and where he lands in the NFL Draft, but Moore belongs in the mix as the 1st WR off the board in dynasty rookie drafts.