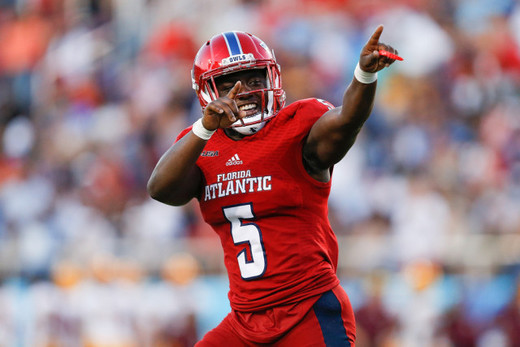 College football fans got to know Singletary in 2017, when he led the nation with 32 rushing scores, tied for the carry lead with 301 and ranked 4th with 1,920 yards. That made him a 2nd-team AP All-American.

Singletary racked up another 22 rushing scores in 2018 for an FAU squad that totaled just 49 TDs. By comparison, the 2017 Owls tallied 73 touchdowns. Singletary saw his receiving role dip for the 2nd straight season and managed 1.2 fewer yards per carry as a junior vs. his sophomore campaign.

Blame his surroundings for the decrease in rushing efficiency. Pro Football Focus rated Singletary 2nd among all draft-eligible backs in missed tackles forced per attempt (behind only David Montgomery) and 3rd in elusive rating. He lasted beyond 1st contact on 42.8% of his rushes, also 2nd-best in the class. Singletary even performed well as a pass protector, ranking 9th among RBs in pass-blocking efficiency.

Singletary proved extremely reliable for FAU. He reached double-digit carries for the 1st time in his 5th game as a freshman. From that point to the end of his Owls career, Singletary cracked 100 rushing yards in 22 of 34 contests. That included a pair of 235+ outings in his debut season and 12 straight triple-digit efforts his sophomore year.

Singletary has reminded me to not get too caught up in exciting tape. But he is pretty fun to watch.

The biggest thing you’re likely to notice if you watch him for a while: Singletary is not particularly interested in getting tackled.

Singletary doesn’t run like a little guy. Frankly, I forgot how short he was while watching the 5 games listed. And Florida Atlantic clearly trusted him with workhorse usage over the past 2 years.

The disappointing 40 time matches up with his tape. Singletary doesn’t explode through openings or blow past defenders on long runs.

He does, however display impressive vision and the feet to quickly change direction when trouble approaches.

Check out this play, on which the RB actually starts to cut right but then sees the approaching defender and quickly switches his direction to find a path to the end zone.

Singletary’s also willing to follow his blocks no matter how far downfield he gets.

As you might guess from his mere 6 receptions last season, there aren’t many opportunities to observe Singletary’s receiving skills. He looked fine on the few screen passes I saw, though, and fared fine in Combine receiving drills. It is a bit worrisome, however, that FAU let another RB beat Singletary in receptions in the starter’s final season (albeit, just a 10-6 edge).

I say not to “get too caught up in exciting tape,” because it’s important to remember the level of competition Singletary faced in Conference USA. To be fair, it’s also worth noting that his team managed records of just 4-8 in 2016 and 5-7 in 2018 against that competition.

There are certainly times where Singletary looks like a bully or simply in a class above those around him. The NFL, of course, will be several classes above even the top competition FAU faced. That’s where the disappointing testing numbers come in.

I can remember not being overly impressed with Carey’s tape heading into the 2014 draft, where he went in the 4th round. I can also remember very much liking the tape of backs such as Kenneth Dixon and Paul Perkins, who have yet to reward us believers.

So I’m very curious to see where Singletary lands in the NFL Draft. NFL.com’s Daniel Jeremiah has dropped Singletary from 37th in his initial Top 50 overall rankings to 43rd and now off the list, since the Combine.

I still believe the right situation and opportunity can turn Singletary into a productive fantasy back. But I won’t be moving up in rookie drafts to get a piece of him.

If you've got questions about playing -- or winning -- FFPC competitions, the guests on this episode have your answers ...

Overall and positional rankings for your playoff-long fantasy contests.

Is it Trey Lance Week? Or is he a classic fantasy football mistake?

It's crunch time. It's this week for a shot at the championship. Let's put together your best lineup.

Mike and Adam put a wrap on the fantasy football regular season as we look toward the playoffs -- and the FFPC Championship Round.

Injuries, COVID deactivations and playoff decisions got you panicked? We're here to help.