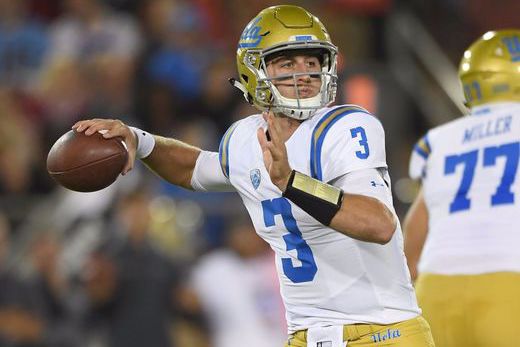 Rosen arrived at UCLA as an already-decorated player. He earned 1st-team USA Today All-America recognition after piloting his high school team to a California state championship as a senior. Rosen then graduated a semester early to be able to join the Bruins for spring practice.

That fall, Rosen became the 1st true freshman to start a game for UCLA in 13 seasons and the 1st in school history top open the year starting. He finished the campaign as Pac-12 freshman offensive player of the year and a member of multiple freshman All-America teams.

Rosen opened his sophomore season inconsistently, beginning with a 3-INT dud against Texas A&M. Then his campaign ended 5 games early with a right shoulder injury in October.

He returned for the start of 2017, however, and began the year with a now-signature comeback victory over A&M. Rosen finished that game with 491 yards and 4 TDs, despite a sluggish start (and getting lucky in avoiding 2 late INTs). After a 5-TD win vs. Hawaii, Rosen amassed 8 of his 10 season INTs over the next 4 games. That stretch ended with a 219-yard, 0-TD, 3-INT loss at Arizona -- 1 of 2 career games in which Rosen failed to toss a TD.

The UCLA passer finished the year solidly, despite missing a game after each of his 2 concussions (including the bowl game against Kansas State). Rosen ranked 2nd in the country in passing yards per game (341.5). His 62.6% completion rate suffered a bit from 31 drops, according to NFL.com.

This is the QB tape that plays in the head of older NFL coaches when they dream. Rosen stands as tall as he should. He has experience dropping back from under center (in addition to shotgun). He holds the ball at the right level, shows proper footwork and delivers the ball like he’s shooting an instructional video.

“He’s got every throw,” adds CBS analyst Rick Neuheisel, who also most recently coached at UCLA and has a son playing QB for the Bruins.

The games I watched certainly seemed to agree.

Here’s the 1st throw of Rosen’s career, against Virginia in 2015:

Too bad the guy dropped it, or Rosen really could’ve gotten off to a nice start.

The ex-Bruin also shows touch to various ranges, such as this deep-ish TD to now-NFL TE Thomas Duarte …

… as well as this shorter-range toss against Arizona in 2015.

Rosen can also fire it through a tight window when he needs to, such as on this throw against Texas A&M last season -- after he shifted the coverage with a head fake …

Rosen is regularly credited for his intelligence, which flashed on that play. He also displays good pocket presence and awareness. On this play, he quickly found a WR and threw to the only spot he could after deftly recovering his own fumble …

NFL.com credited Rosen with a 63% completion rate when blitzed, slightly higher than his overall rate. Here he shows his willingness to stand in against pressure to deliver the ball … even when the hit comes illegally late …

There are also times where Rosen sails throws and overshoots open wideouts deep.

According to NFL.com, his completion rate wasn’t good on deep balls -- despite having plenty of arm. Rosen also displays some Eli Manning Disease, where he’d rather throw a ridiculous pass than take a sack.

Those kinds of things are for his coaches to worry about week to week, though. If they were big concerns, he wouldn’t be driving toward April as a consensus top-3 pick.

Rosen is such a clean prospect that analysts seem to be making up issues.

ESPN’s Todd McShay wonders whether he’ll annoy his coaches by probing too hard for answers on why to run plays certain ways. Um, if you’re a professional coach and can’t satisfactorily explain your own plays to your own QB, then the player’s probably not the guy with a problem.

But he took a veiled shot at the Browns by saying in December he’d rather go to the “right situation” than get picked 1st. Yeah. And Eli Manning refused to play for the Chargers, and John Elway went to baseball rather than put on a Colts jersey. Come on.

Many wonder how important football is to Rosen, seemingly because he grew up in a rich family and grew up playing tennis. Is he willing to take the hits? The dude lost half his sophomore year to a throwing-shoulder injury and suffered 2 concussions last fall. I’m pretty sure he understands the physical side.

Some team will likely overlook all these gratuitous red flags and draft Rosen among the top 5 picks in April. So what’s the fantasy outlook?

For fantasy football owners, he’s Matt Ryan. That’s not really a knock or praise. Rosen could finish 6th among fantasy QBs in 2020 or he could finish 18th.

He’ll likely be more dependent than Baker Mayfield or Lamar Jackson on landing in a good spot. Rosen can move around in the pocket, but he’s not going to create any fantasy value with his mobility.

In a solid situation, Rosen could easily settle into that group of fantasy passers populating the 10-18 range these days. If you need a young QB, he’ll make sense by Round 3 of a dynasty rookie draft -- perhaps even in the 2nd half of Round 2.