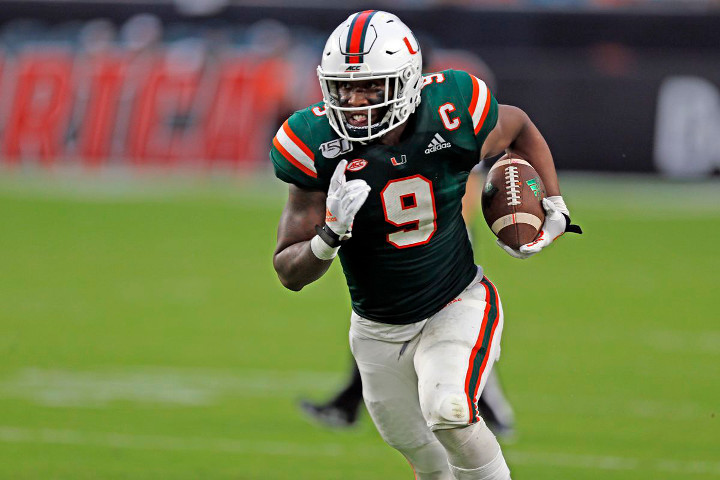 (Jordan admitted he was "disappointed" with his Pro Day performance.)

Jordan posted a 32-287-4 receiving line as a true freshman, enough to rank 2nd on the team in catches and TDs.

In 2019, he missed 3 late-season games due to a foot injury. He still finished 2nd on the team in receiving yards on a healthy 14.1 yards per catch.

Another injury surfaced in 2020 — this time a shoulder. He missed 3 games but managed to slot 2nd on the team in catches (38) and yards (576). He tied for the team lead with 7 receiving scores. The final 3 games (Duke, North Carolina, Oklahoma St.) turned up an eye-opening 18 catches for 311 yards and 4 scores.

Jordan’s efforts earned him second team All-ACC honors — plus a spot as a Mackey Award semifinalist. (That award went to Florida’s Kyle Pitts.)

Let’s take a look at what he was able to accomplish in all different alignments.

Watching Jordan reminded me of Charles Clay. Their size, athleticism and play style all line up.

Clay arrived as a 6th-round pick. Jordan will come off the board earlier, but recall that the former Bill, Dolphin and Cardinal enjoyed a nice run with 5 straight seasons of 500+ yards.

As for Jordan, Miami routinely moved him around the formation. Getting him away from the traditional, in-line spot was a priority, as Jordan was mistake-prone as a blocker. Here he is at his worst...

Of course, some team will draft Jordan because he can run routes. Routinely, he won on in-breakers...

The guy knows how to get DBs off balance, and it showed on more than just the 2 clips above.

Jordan's run-after-catch ability was utilized plenty. Per PFF, he broke tackles at an impressive rate (21 on 105 career catches). He can be dangerous on any route that allows him to build up steam. Frankly, his play speed looked faster than his mid-4.6 time suggests.

Jordan survived contact well in the clip below. Interestingly, though, he fared poorly in PFF's contested catch metric. He went just 11 of 33 in such situations for his career. It's an area to keep an eye on, especially given his smallish size for a TE.

Jordan is widely considered the TE3 in this class behind Kyle Pitts and Pat Freiermuth. That's the current order in our TE dynasty rankings.

If Jordan can get to a competent level as a blocker, it's easy to see him becoming a future streaming option. Clearly, there's a need for playmaking TEs in the NFL, and Jordan can fill that void for someone. He's expected by most analysts to come off the board in Round 3, with the Jaguars, Bengals, Panthers and Titans making sense as fits.

Jordan, only 21 in July, is a long-shot for 2021 fantasy value. But he's certainly someone to watch for the long term.