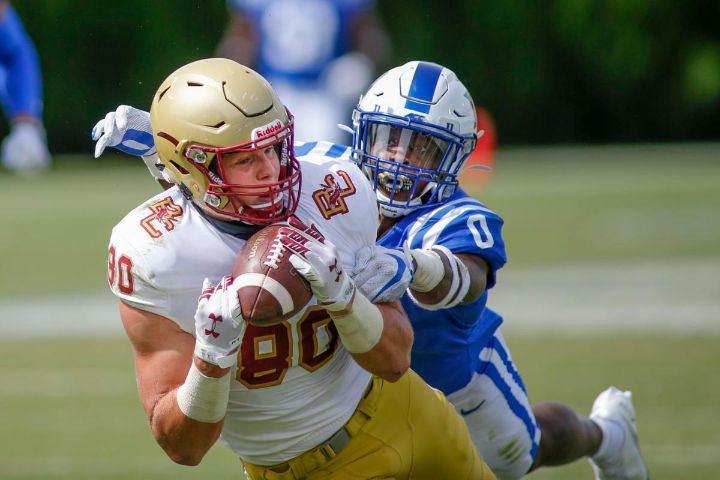 Long’s reported 40 times dipped as low as 4.63 seconds, which would rank him 81st percentile among TEs, according to Pro Football Focus. Even the downward-adjusted time above, though, still gives Long an above-average speed score (65th percentile) for the position. Boston College HC Jeff Hafley said he believed Long “happily surprised” scouts with his speed.

“His workout was awesome,” Hafley added. “He ran really well. He looked big. I thought in the position drills, he lit it up. It was about as good as I’ve seen him look.”

The agility testing proved below average, including a 15th-percentile 3-cone time. But Long still checked in with an elite Relative Athletic Score for the position, rating among the top 15% at the position all time.

Long earned all-state honors in Massachusetts as both a TE and DE. He headed toward college as just a 2-3 star prospect, though, choosing Boston College among a mere 7 offers -- all from schools in the Northeast.

Long took a redshirt in 2017 and then made minimal impact the following season. He caught just 4 balls in a run-heavy Eagles offense that lived on the shoulders of RB AJ Dillon. That unit also sported TE Tommy Sweeney (now with the Bills) and WR Jeff Smith (spent the past 2 years with the Jets).

Long stepped up to lead the 2019 squad with 509 receiving yards, while his 28 receptions trailed leader Kobay White by just 1. (Dillon led an even more run-heavy attack that averaged 50.2 carries and 23.5 pass attempts per game.) The numbers were good enough to land Long 3rd-team All-ACC honors.

He closed out his BC run with 1st-team all-conference and 2nd-team AP All-America accolades in 2020. Long collected 23.6% of Eagles receptions, 21.9% of receiving yards -- leading the team in each category -- and 21.7% of receiving TDs. His 5.2 receptions per game for the season trailed only Pat Freiermuth (5.8) and Kyle Pitts (5.4) in this TE class. Long led the group in market share of catches.

For the season, he posted 5 games of 6+ receptions and 80+ yards, including an 8-109-1 receiving line vs. Virginia in his final outing. Long landed among 8 semifinalists for the 2020 John Mackey Award (nation’s top TE) but didn’t make the group of finalists.

Long looks like a solid TE prospect … and fairly unexciting for our purposes.

If scouts left his pro day “happily surprised” by Long’s speed, then it’s probably because they didn’t see him play at a particularly impressive pace.

The TE can certainly take a short catch and turn it upfield.

But he doesn’t particularly pop as a downfield threat or even intermediate route-runner. Don’t expect him to create separation for himself at the next level.

In this clip, a sluggish break in his route causes Long to arrive too late to catch a ball that should have been right on him.

Long does appear to have reliable hands, though.

And he’s capable of going down for low throws.

Long certainly wasn’t perfect in contested situations, though, even just in the 4 games I watched.

Long was an active blocker in both the run and pass game at BC.

Though he’ll need to add strength -- and probably refine his technique -- to really be able to help in that area as a pro.

Boston College featured Long as a receiver over the past 2 seasons, running him from various spots around the formation. I saw Long work from traditional inline TE alignments, the slot, flexed out wide and regularly going in motion. The game speed, though, didn’t seem to match up with the positive testing numbers.

I don’t expect Long to turn into a featured pass-catcher in the pros. He brings the kind of size that should be particularly attractive in red-zone situations. Yet even that role takes some projection. He caught just 16.3% of BC’s TD throws over the past 2 years. Long’s 21.7% TD market share for 2020 alone fell short of classmates …

Long can become a reliable producer in a strong pass offense, though. Jason Witten’s name gets over-applied in these situations, but he comes up as the Best Comparable for Long on PlayerProfiler. Even their college numbers line up. Here are Witten’s …

Of course, comparing any TE to Witten will set unreasonable stat expectations. Witten landed in a terrific volume situation and then stayed in it for an inordinately long time. In the right NFL landing spot, Long can be that type of receiver. But he's probably not going to find 120+ annual targets anywhere.

Let's set the upside at Chris Cooley, and see where Long goes. He could certainly make sense as a rookie-draft pick late in Round 3 or Round 4.