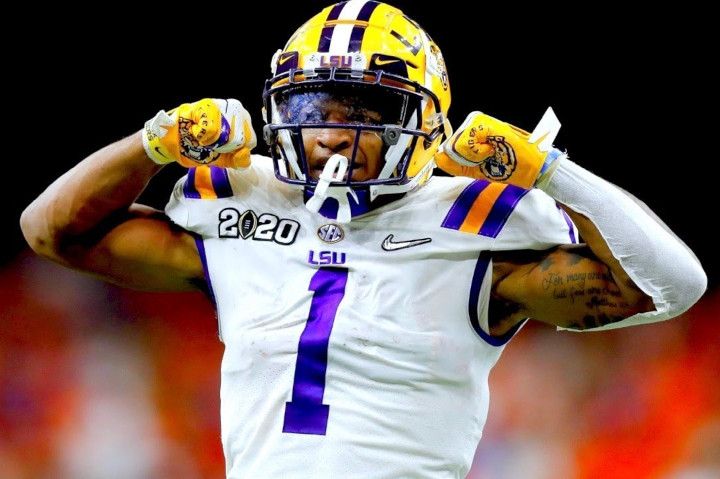 Chase was rated a 4-star prospect by ESPN and Rivals and a top-20 WR in the 2018 recruiting class by 247Sports.

He got on the field for all 13 of LSU’s games as a true freshman, finishing 3rd on the squad in catches and yards and 2nd in TDs. (That LSU team ranked just 67th in passing yards per game.) Chase started the final 5 games of the season and closed with a 6-93-1 line in a Fiesta Bowl win over Central Florida.

Then came a massive 2019 campaign. Chase set SEC records for receiving yards and TDs in a season, was named a unanimous All-American and beat out CeeDee Lamb and Michael Pittman to win the Biletnikoff Award given to the nation’s top WR.

Playing with QB Joe Burrow on 1 of the best college offenses we’ve ever seen certainly helped. But Chase played a big part in making that offense so good. He led the team in receiving yards and scores, notably ahead of then-junior Justin Jefferson. You know -- the guy who just set the record for most receiving yards by a rookie.

Chase accounted for 19.7% of the Tigers’ receptions, 29.5% of the receiving yards and 32.8% of the receiving scores. Those aren’t elite market shares in a vacuum -- but they’re super impressive when you consider that he was a 19-year-old true sophomore playing alongside multiple NFLers and future NFLers.

We, unfortunately, didn’t get to see an encore from Chase. He opted out of the 2020 season due to COVID concerns.

Chase plays like a schoolyard bully. His physicality is his greatest asset -- and we see it before, during and after the catch.

Chase doesn’t have elite quickness or change of direction to create separation. But he’s not afraid to get physical at the line of scrimmage and throughout his routes.

Chase is at his best down the field. He led the nation in 2019 with 24 catches 20+ yards downfield, according to Pro Football Focus. Although he doesn’t have high end speed, Chase is fast enough, understands how to stack his defender and is a good ball tracker.

He’s also excellent in contested situations, showing the ability to adjust to balls in mid-flight and out-leap defenders.

You don’t see Chase create a ton of separation on short and intermediate routes. But he doesn’t need to because he’s so good at the catch point.

Chase looks super comfortable making catches in tight quarters, using his body to shield defenders and his hands to snatch the ball out away from his body.

Chase is a hard-nosed runner after the catch. Pro Football Focus charted him with 22 broken tackles in 2019.

He also shows some wiggle and speed to turn a short catch into a long gain.

There are certainly holes to poke in Chase’s profile. He has just 1 big season on his resume, didn’t play at all in 2020 and isn’t a big separator on tape. So it’s fair to say he comes with more risk than most WR prospects who will go early in the NFL draft and dynasty drafts.

But the ceiling here is as high as any WR prospect we’ve seen come into the league in recent memory. It’s an understatement to call Chase’ 2019 a “big season.” It was a historically great season. A record-setting season. And one that came from a true sophomore sharing the field with a guy who’d go on to set the NFL rookie receiving yardage record the following year.

That portends massive upside at the next level. Imagine if Chase really does prove to be better than Justin Jefferson.

He’s a different style of prospect than his former college teammate. But Chase’s physicality should translate to the pros, especially considering he’ll only get stronger. He projects as his NFL team’s #1 WR down the road -- although it is fair to wonder if he’ll get off to a slow-ish start after sitting out last season.

That’ll be something to monitor this summer and perhaps a reason to be cautious in redraft. But Chase should fly off the board within the first few picks of dynasty rookie drafts. He might even be in consideration at #1 overall depending on landing spots.