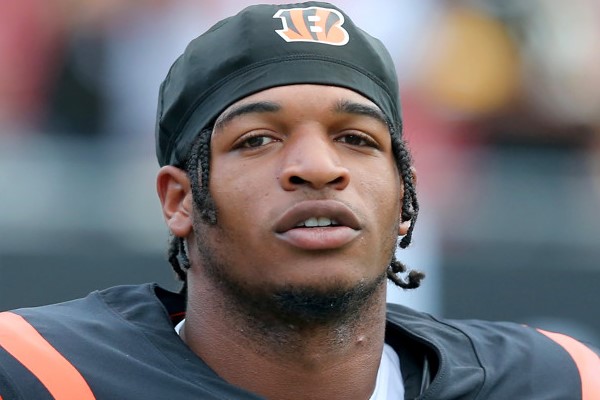 Chase will likely see a lot of Dolphins stud CB Xavien Howard on Thursday night. But we're not betting against Chase in any matchup.

Chase arrived after a year away from football, playing with a QB coming off an ACL tear and alongside a pair of established wideouts. He immediately did historic things. All signs point to Chase being a true #1 type of WR. Having Tee Higgins around might slightly lower the target ceiling, but Chase also looks capable of consistently producing above-average efficiency in both yardage and TDs. And the Bengals offense still has room to improve. Joe Burrow now has a full season between him and a double-ligament tear. Chase has a year of NFL experience. Higgins heads into his 3rd pro campaign. The target question lands Chase behind Cooper Kupp and Justin Jefferson in our 2022 rankings, but he belongs in Round 1 across most formats.

Bengals QB Joe Burrow rebounded from a pair of shaky outings to post his best fantasy outing so far this season in Sunday's win over the Jets. Burrow tallied 275 yards and 3 TDs, hitting Samaje Perine, Ja'Marr Chase and Tyler Boyd for scores. Chase led the team with 10 targets but managed only 29 yards on his 6 receptions. Boyd checked in 4th with 5 targets but caught 4 of them for 105 yards. His big strike was a 56-yard catch-and-run TD. Higgins proved steadiest, catching 5 balls for 93 yards among 7 looks. Cincinnati gets a home date with the Dolphins this Thursday night, then visits to Baltimore and New Orleans.

Playing all 81 snaps in Week 1, Bengals WR Ja’Marr Chase racked up 16 targets, 10 catches, 129 yards and 1 score. The monster line came against Pittsburgh in a game that lasted until the end of overtime. Tee Higgins also departed in the 1st half with a concussion. As we saw last year, Chase was electric with the ball in his hands, dodging several tacklers and showing top-end burst. He also had 2 near TDs that didn’t count: One where he likely crossed the goal line but HC Zac Taylor decided not to challenge, the other on a sweet one-handed grab where he couldn’t quite get his 2nd foot down. Chase will look to keep rolling next week against Dallas.

Paul Dehner of The Athletic writes that WR Ja’Marr Chase “has picked up right where he left off” last season. You know, because All-Pro talents don’t just decline in their 2nd season. “It’s not a surprise, and it’s hard to imagine his stock soaring any higher, but Chase looks like he’s playing a different game,” Dehner shares. Good to know. The LSU product is currently coming off the board 3rd among WRs — and rightfully so.

Per the Bengals’ official website, WR coach Troy Walters “envisions” WR Ja’Marr Chase playing in the slot more this season. "I'm cool in the slot,” Chase said. “I just need more reps in it. It doesn't really matter to me. It's just another way for me to get the ball.” According to Pro Football Focus, Chase spent 15.8% of his snaps in the slot as a rookie. Unsurprisingly, he posted an elite 2.49 yards per route run from the inside alignment. The 22-year-old remains a top-5 fantasy WR.

Bengals QB Joe Burrow, WR Tee Higgins and K Evan McPherson are inactive for today’s game vs. the Browns.WR Ja’Marr Chase is active but might play just long enough to get the 12 yards he needs to set Cincinnati’s single-season franchise record.TE C.J. Uzomah (knee, hip) is surprisingly active after missing practice all week.

Chase came off a year away from football, joined an offense with Tee Higgins already in place and topped Justin Jefferson's rookie-year receiving yards per game. He's impossible to NOT bet on going forward.