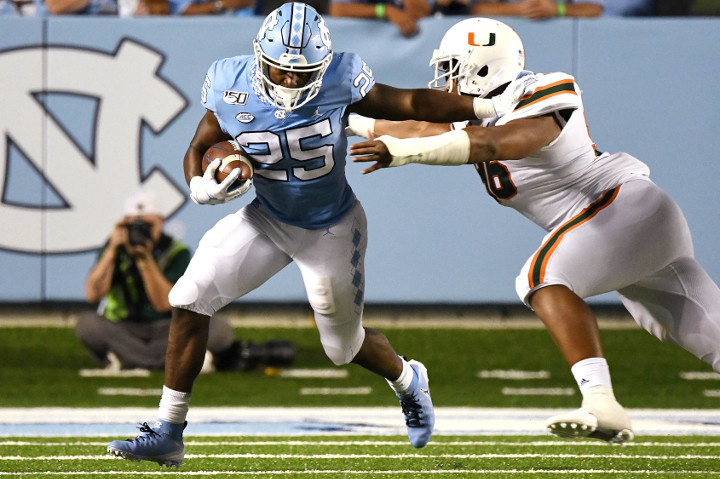 * North Carolina listed Williams at 220 pounds. Perhaps he dropped weight to boost his testing numbers, but the 212 figure likely raised some eyebrows around the league.

Williams moved from LB to RB as a high school senior.

Let’s just say he made a fine decision.

That year, the Wallace, North Carolina native went off for 2,634 total yards and 32 scores. He stayed close to home by committing to The University of North Carolina in late 2017.

Next fall, Williams played behind sophomore Michael Carter (84 carries) and junior Antonio Williams (91 carries), a 2020 UDFA who’s currently on Buffalo’s roster. Carter looks like a Round 2/3 pick in April, so Williams’ relatively small college sample shouldn’t be a major knock.

In 2019, Carter and Javonte Williams jumped to the top of the depth chart. The duo nearly split the backfield evenly with 177 carries going Carter’s way and 166 going to Williams. That theme repeated in 2020 with Williams out-carrying Carter 157-156. They even posted the same catch total (25).

As we’ll see in the next section, Williams runs with excellent power. That’s just not all he wants to be known for.

"As far as me modeling my game after a certain player, I'd say it's like a mixture of Alvin Kamara and Nick Chubb,” Williams said via 247Sports.

One last note before the tape: Williams never missed a game at UNC due to injury. He and Carter did skip their Orange Bowl matchup against Texas A&M to prep for the pros.

Now for the good stuff...

“Williams is a bruising ball carrier who doles out a lot of punishment, running with an aggressive style and consistently finding ways to pick up yardage. He’s best running downhill, but I fully expect Williams will break in with the first team at the next level if put in the proper system.”

Watch just 1 or 2 of his games, and it’s hard to disagree with that assessment. Williams was essentially a bully with the ball in his hands. And he looked better than I expected when moving laterally...

Williams, of course, used his stout frame to find success on inside runs. He was the type to make a quick up-field cut before maximizing yardage with raw power. In fact, Williams was the most elusive college RB ever charted by Pro Football Focus. Amazingly, he averaged nearly 4.6 yards after contact per attempt while totaling 75 forced missed tackles (most in the nation).

This next run might have been the RB highlight of the year. Williams and Carter combined for 544 yards and 5 TDs on 47 carries -- not a typo -- against Miami in a truly historic show of rushing dominance. It also wound up being both RB's last appearances as Tar Heels. Quite the walk-off.

Williams certainly proved capable as a receiver, but he didn't stand out as a natural pass catcher. PFF charted him with 3 drops on 27 catchable passes in 2020. When securing the catch, he showed more make-you-miss ability with 9 missed tackles forced....

As a route-runner, there wasn't a ton to go off. But the below clip stood out. Williams finds himself isolated against Notre Dame LB Jeremiah Owusu-Koramoah, a likely Round 1 pick and a strong coverage guy.

Williams' pass blocking looked just fine. He gave up a couple of pressures in the 6 games I watched, but overall, he looked like the aggressor. We know he's built to handle blitzing DBs/LBs.

Williams looks like a 3-down back at the next level. He brings plus size, excellent tackle-breaking ability and enough in the passing game to project such a role. His NFL fit will determine whether he becomes anything close to a workhorse.

The Jets, Bills, Dolphins, Steelers, Falcons and Cardinals each have varying degrees of RB need (and Round 2 draft capital). I'd be mildly surprised if he makes it past Pittsburgh at pick #55. I wouldn't be shocked if he goes ahead of either Najee Harris or Travis Etienne.

For now, though, Williams enters April as our #3 rookie RB in dynasty setups.