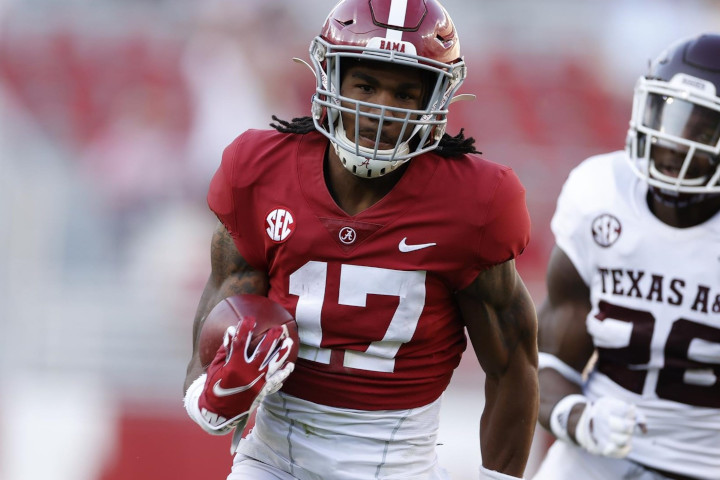 Waddle opted to not work out at either of Alabama’s Pro Days.

Waddle was a 4-star recruit and a top-10 WR in the 2018 class according to most scouting services. He chose Alabama over offers from 20+ other schools, including LSU, Auburn, Georgia, Michigan, Notre Dame and Oklahoma.

Waddle made an immediate impact on a 2018 Crimson Tide squad loaded with NFL talent. He ranked 2nd on the team in receiving yards -- behind only sophomore Jerry Jeudy and ahead of sophomore Henry Ruggs, sophomore DeVonta Smith and junior Irv Smith. Waddle finished 3rd in catches to Jeudy and Ruggs and tied for 3rd in receiving scores. His market shares: 15.0% of the receptions, 17.5% of the yards and 13.5% of the TDs.

Waddle’s 18.8 yards per catch trailed only Jeudy and ranked 18th nationally. He was also awesome on punt returns, averaging 14.6 yards with 1 TD on 16 chances. Waddle was named SEC Freshman of the Year.

His numbers took a step back in 2019, though, as Jeudy continued to lead the way and Smith and Ruggs surpassed Waddle. He ranked 4th behind those guys in catches and receiving yards; 5th in receiving TDs behind those 3 WRs and RB Najee Harris. The market shares were also down from his freshman season: 11.5% of the catches, 12.6% of the yards and 12.2% of the TDs.

Waddle did continue to dominate on special teams. He led the nation with 24.4 yards per punt return and scored both a punt-return and kick-return TD. He was named SEC special teams player of the year and a 2nd-team All-American as a returner.

With Jeudy and Ruggs out of the way, Waddle got off to a smoking hot start last year. He posted these receiving lines in Alabama’s first 4 games:

Here’s how Waddle’s production stacked up vs. DeVonta Smith’s over those 4 contests:

The momentum was halted on the opening kickoff of game #5, though, by a fractured right ankle. Waddle had surgery that night and was expected to miss the rest of the season. He ended up returning for the National Championship vs. Ohio State but clearly wasn’t back to 100%, finishing with just 3 catches for 34 yards on limited snaps.

Waddle has supersonic speed. And it makes the game easy for him.

He simply runs away from defenders on crossing routes.

He has all kinds of room to operate on comebacks because defenders are forced to respect his deep speed.

And, of course, Waddle is a big-time threat downfield.

He easily splits a double team for a long TD here:

Waddle is also a smooth ball tracker, with the ability to adjust to the ball in mid-flight.

And despite going just 5’9, he can go up and win the ball in traffic. Waddle converted 6 of 8 contested opportunities over the past 2 seasons, according to Pro Football Focus.

Waddle’s speed is obviously a weapon with the ball in hands. But he can also make guys miss and break tackles.

Waddle isn’t as refined or complete a receiver as Ja’Marr Chase, DeVonta Smith or even Rashod Bateman. Maybe he’ll get there. But honestly, he doesn’t need to.

Waddle’s speed is a trump card -- especially in today’s wide-open NFL passing games. Although he didn’t work out in the pre-draft process, he reportedly ran a 4.37-second 40-yard dash coming out of high school, per Scout’s Greg Powers.

Throw in the burst, make-you-miss skills and contested-catch ability, and Waddle can succeed as a pro without becoming a high-level technician.

With a competent play caller, Waddle should be a big-play machine both after the catch and downfield. His fantasy production might be a bit erratic from game to game, but he’s the type capable of providing week-winning scores.