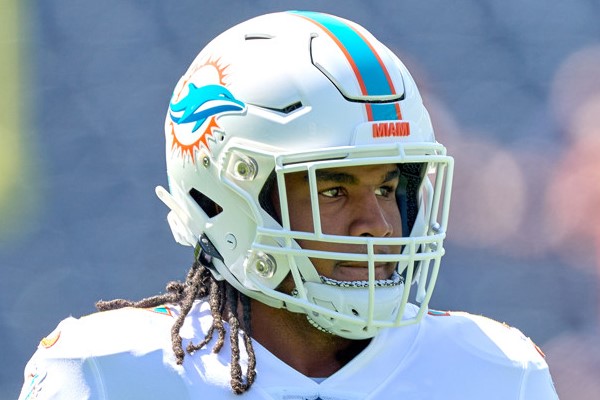 Week 13
Waddle continued his torrid pace with a 9-90-0 stat line in the win over the Giants. He tied for the game high with 11 targets with teammate TE Mike Gesicki and was a constant thorn in the side of the Giants secondary. He now has 26 receptions for 292 yards and 2 TDs (1 rushing) over the past 3 games.
Waddle may not get the Offensive Rookie of the Year honors this year, but he is making a case for his name to garner some looks by the committee. His connection with QB Tua Tagovailoa is really gelling at the right time, and it should only get better with a great matchup against the Jets, following a Week 14 bye. Waddle went for 8 catches 65 yards and a score the last time these teams met.
Week 12
Waddle continues to look like a legit #1 WR alongside Tua Tagovailoa. He snagged 9 of 10 targets for 137 yards and 1 score, giving him 77 catches through 12 games. Per PFN, it’s the 2nd highest total all-time for a pass catcher through 12 games. He dominated after the catch in this one, and Tua’s excellent ball placement certainly helped. That was also the case the end zone, where a well-timed throw allowed the rookie to come down with a contested catch score. Now with 7 games of 6+ catches this season, Waddle’s matching PPR consistency with huge upside. He’s a WR1 for Sunday’s matchup with the Giants. After that comes a Week 14 bye.
Week 9
Waddle did well considering the fact that Jacoby Brissett filled in as the Week 9 starter. While a matchup with Houston helped, Waddle tallied 8-83 on 10 targets. He’s now hit 8+ targets in 4 straight. Waddle excelled in the short to intermediate ranges, while he was targeted deep on a Brissett INT that didn’t give the WR a chance. We’ll see if Tua Tagovailoa (finger) returns on Thursday night, but we know DeVante Parker will remain out on IR. And the matchup is fine for Waddle against Baltimore. Waddle is a WR3+ for that one.
Week 6
Waddle continued to primarily work in the short to intermediate ranges in Sunday’s loss to Jacksonville. That usage — combined with a pair of goal line looks — produced a 10-70-2 line. He saw a team-high 13 targets — a 27.6% team share — aided by the absence of Will Fuller and DeVante Parker. Tua Tagovailoa’s return certainly helped, and a matchup with Jacksonville’s burnable defense helped too. Sunday’s game came at a good time, as Waddle had posted back to back duds alongside Jacoby Brissett. As long as Tua remains healthy, Waddle will profile as a spot-start WR3 going forward. That’ll be the case Sunday vs. Atlanta.
Week 5
Waddle needs a healthy Tua … and fast. Despite a strong matchup vs. Tampa Bay, the Fins’ top pick tallied just 2-31 on 6 targets. And that was despite getting crushed in the 2nd half, ultimately losing 45-17. Waddle did draw a downfield PI call, and he dropped an end zone target that was ultimately called back on a penalty. Waddle also had one easy catch lost to a drop that went for a pick. Still, Jacoby Brissett clearly isn’t taking playing the type of ball necessary to unlock Waddle’s upside. Myles Gaskin led the Fins in targets on Sunday (10), with Mike Gesicki (7) ranking 2nd. The rookie will look to rebound for a Week 6 London game vs. Jacksonville. The matchup is excellent — now we’ll see if Tua’s ribs allow him to return to action.
Week 4
Miami fired off only 39 plays in an ugly loss to Indy. Jacoby Brissett struggled to consistently move the chains and was limited to just 30 attempts despite a pass-favoring game script. So forgive Waddle for a ho hum 3-33 line. His 4 targets ranked behind DeVante Parker (9) and Mike Gesicki (6). When he did catch the ball, Waddle showed off his elite burst. There’s just not much reason for optimism with this offense because of Jacoby Brissett, who’s slated to make 1 more start. Waddle should benefit from another Will Fuller injury, as the former Texan is expected to miss at least Sunday’s game against Tampa Bay.
Week 2
With Will Fuller out again, Waddle saw 8 targets against Buffalo — an 18% team share. The issue was that Tua Tagovailoa suffered a 1st quarter rib injury. Jacoby Brissett, meanwhile, proved to be a clear downgrade. Waddle also dropped a pass, so his 6-48 line could have been even better. We’ll see if Tua returns for Week 3 at Vegas, but that matchup at least looks better on paper. Fuller’s status remains another variable, as there’s no guarantee he’ll return (personal matter) as of mid-week.
Week 1
Waddle was as dynamic as advertised in his pro debut. Per Next Gen Status, he created an elite average of 3.6 yards of separation per route run. He wound up with 4-61-1 on 6 targets, 2nd most on the team behind DeVante Parker (7). Miami schemed up a throw to Waddle in the flat off motion, and his speed helped him cross the goal line near the sideline. Earlier, Waddle went up for a 36-yard deep ball that showed his underrated contested catch ability. Pass volume remains a macro issue for a Dolphins offense that wants to lean run. Will Fuller will also return from suspension in Week 2. Still, Waddle has the talent and rapport with Tua Tagovailoa to supply matchup-based WR3 totals going forward. Next up is a home matchup with a tough Buffalo secondary.

Waddle brings rare speed to an offense that severely lacked it in 2020. He exits college with nearly 19.0 YPC against strong SEC competition.

He’ll face stiff target competition in Miami, so the immediate returns — specifically early in the season — might be uneven. Still, he’s the type of explosive threat that’ll at least demand attention in best ball formats.

Dolphins WR Jaylen Waddle is set to be activated from the COVID list, HC Brian Flores said. So Waddle should get in a full week of practice and play vs. the Saints next Monday night. The rookie averaged 9.2 targets, 7.6 catches and 87.2 yards over his last 5 games.

Dolphins WR Jaylen Waddle has been placed on the COVID list. He's a long shot to be cleared in time to play vs. the Jets on Sunday. His absence would leave WR DeVante Parker and TE Mike Gesicki as the clear top 2 options in Miami's passing game -- assuming they avoid the COVID list. QB Tua Tagovailoa's Week 15 fantasy stock takes a sizable hit without Waddle.

The Dolphins selected Alabama WR Jaylen Waddle with the 6th overall pick of the 2021 NFL Draft. Waddle turned in a super impressive true freshman season back in 2018, hauling in 45 balls for 848 yards and 7 scores on a loaded pass-catching corps. His 848 yards ranked 2nd to only sophomore Jerry Jeudy -- ahead of sophomore Henry Ruggs, sophomore DeVonta Smith and junior Irv Smith. Waddle took a step back as a sophomore, finishing with a 33-560-6 line. But he got off to a monster start this past year, racking up 25 catches for 557 yards and 4 scores over the first 4 games. Waddle actually led DeVonta Smith in yards and matched him in TDs during that span. He went down with a fractured right ankle in game #5, though, and was clearly limited when he returned for the National Championship vs. Ohio State. Waddle is reportedly recovering nicely from that injury and didn’t miss time with any other injuries across his 3 college seasons. The Fins are getting the most explosive WR in this class. Waddle has supersonic speed, routinely blowing by DBs on deep balls and crossers. He also flashes plus contested-catch ability, despite going just 5’9 and 180 pounds. There are shades of Tyreek Hill to his game. No excuses for QB Tua Tagovailoa, who now has former college teammate Waddle plus Will Fuller, DeVante Parker and Mike Gesicki.