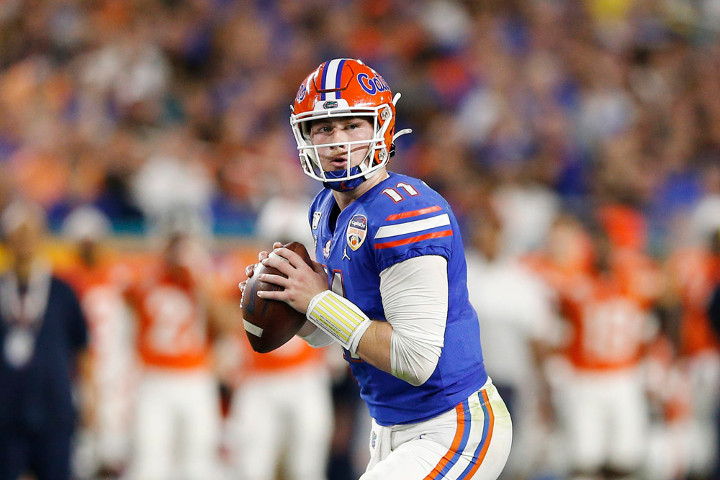 Trask played behind current University of Miami QB D’Eriq King in each of his final 3 high school seasons. It took a recruiting camp at the University of Florida to get the Gators interested.

2016 was a redshirt season. The following year, Trask underwent meniscus surgery in April and foot surgery in September. He never saw the field.

Another foot injury followed in 2018 — this time a broken foot in November. He ended that season with only 22 attempts.

Trask took a huge leap forward in 2020. His 43 passing scores tied Tua Tagovailoa for 3rd most in SEC history. His 4,283 passing yards gave him sole possession of 3rd. Pitts’ individual game took off alongside a senior breakout from WR Kadarius Toney.

No surprise, then, that Trask earned Heisman finalist status.

A Senior Bowl invite followed, but Trask was forced to decline due to an ankle injury. The 23-year-old at least participated at his March Pro Day.

Trask isn’t a quick-twitch athlete, and he’s not a speedy rusher like Justin Fields or Trey Lance. But his senior season showed a lot to like as a pure passer.

While Trask lacks explosiveness, he makes up for it with pocket feel and movement.

Trask won't make splash plays outside of structure. But to me, his in-pocket ability gives him the best chance to stick around in the league.

Over and over, I'd see him step up and make some beautiful touch passes (check out the first clip again). This next one finds him hook up with Pitts, whose wingspan (nearly 84 inches) is simply massive. Still, this ball is placed perfectly vs. tight coverage...

Trask isn't given credit for having a plus arm, but it's generally regarded as adequate. Here you see him fit a ball 25+ air yards right over the CB -- and without really stepping into the pass. He did perform well on deep balls in 2020, earning a Pro Football Focus grade of 96.6 on such throws.

Trask made some head-scratching decisions in my sample of games. Below, he underthrows a ball into triple coverage while facing pressure.

Here he stares down his target, allowing the defender to break on the ball for a pick 6.

Trask actually had 4 picks turned into defensive scores last season. One thing to keep in mind with this Oklahoma game: Trask didn't have his top-4 pass catchers (including Pitts and Toney) available. The Cotton Bowl matchup was easily his worst showing of the year: 158 yards, 0 TD, 3 INTs and a 57.1% completion rate in a 55-20 blowout loss.

Per ESPN's Hollie Rowe, Trask had only 3 practices with the new-look pass-catching corps heading into the game. Now, the Oklahoma matchup gave Trask an opportunity to show he can elevate teammates. Similarly to Mac Jones, supporting cast -- and scheme -- are routinely brought up as knocks against Trask. Dane Brugler of The Athletic notes that nearly 46% of his yards came after the catch in 2020.

All that to say: Trask's dud against Oklahoma is understandable.

Trask might be getting Round 1 buzz in a year less stacked at QB. As things stand now, the Manvel, Texas native seems likely to get drafted somewhere on Day 2 as the QB6-QB7.

So you can’t expect any year 1 fantasy help. And even if he does see the field, a lack of rushing ability will put an increased importance on the supporting cast.

Ultimately, look for Trask to sit for a year behind a veteran. Teams like Denver, Washington, New England and Pittsburgh could target a QB outside of Round 1.