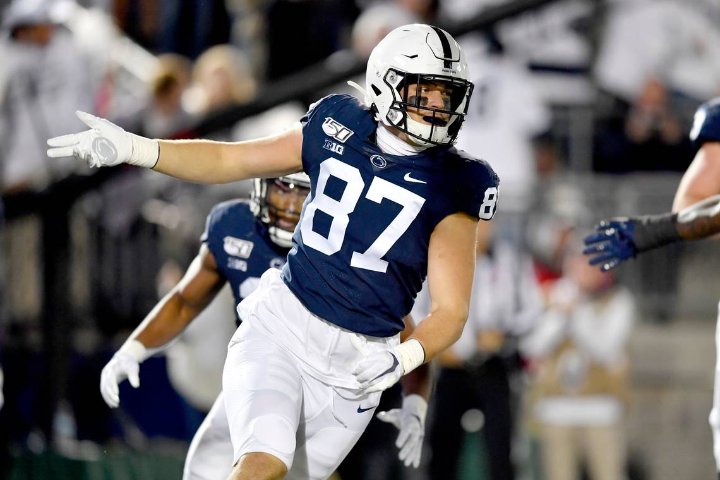 Freiermuth did not work out at Penn State’s March 25 pro day. He’s rehabbing a shoulder injury.

Freiermuth was a 4-star recruit in the 2018 class, choosing Penn State over at least a dozen other offers that included Notre Dame, Ohio State and LSU.

He made an immediate impact with the Nittany Lions, earning honorable mention All-Big Ten honors as a true freshman. Freiermuth’s 26 receptions and 368 yards each ranked 2nd on the team behind only K.J. Hamler. His 8 TDs beat Hamler’s total by 3, ranked 2nd among all FBS TEs and accounted for 38.1% of his team’s total.

As a sophomore, Freiermuth checked in 2nd behind Hamler in catches, receiving yards and TDs. His season proved good enough for 2nd-team All-Big Ten honors, and the TE was chosen Penn State’s most valuable offensive player.

His 2020 campaign got off to a torrid start. Freiermuth caught 6+ passes in 3 of his first 4 games, averaging 77.5 yards per contest. But then a shoulder injury ended his season. Despite playing only 4 of Penn State’s 9 games, he still finished 3rd on the team in both receptions and yards. Freiermuth jumped his catches per game to 5.75, after averaging 3.31 and 2.17 the previous 2 years. He led all FBS TEs in receptions per game, ranked 5th in yards per contest and still won the Big Ten’s TE of the Year award.

Freiermuth actually injured his right shoulder in the season’s 2nd game but played through it for that contest and then 2 more before having surgery late in November. He tore the anterior and posterior labrum, but the expected 5-6 month recovery process should have him ready in plenty of time for his rookie season. (Six months from the surgery date would be the end of May.)

Pat Freiermuth is a TE. He’s not related to fellow Penn State alum Mike Gesicki other than hailing from the same program.

The biggest difference between them: Freiermuth doesn’t mind blocking. You can find plenty of standard examples in pass or run blocking. In this clip, he doubles first before sliding off to deliver the key block to break a long run …

Freiermuth still has some development to do in his blocking. Even in just the 3 full games I found, there were multiple occasions of Freiermuth catching rather than delivering a blow …

For our purposes, of course, the blocking only matters insofar as it gets him onto the field early in his NFL career. That shouldn’t be a problem.

Freiermuth looks like he sports enough blocking acumen to get him on the field for the receiving stuff that we really crave. And he presents a well-rounded package in that area as well.

The Nittany Lions lined him up in various spots, from inline here (he beats a DB on a drag route) …

… to split out wide and running a successful post pattern.

Freiermuth doesn’t fit the “new-age” TE mold where he’ll burn defenders with speed. But he moves well enough to be effective after the catch.

And although he isn’t a punishing runner, there’s certainly some of the ruggedness you’d expect in a guy his size.

Freiermuth likely won’t prove fast enough to consistently separate from coverage downfield, but he is capable of working deeper routes.

And he has the hands to win in contested situations.

Before arriving at Penn State, he succeeded at LB and RB in addition to his TE duties, and also played basketball throughout his high school career.

He’s not going to wow you with any particular aspect of his game, but Freiermurth also doesn’t present a glaring weakness. We’ll see whether the shoulder recovery impedes his rookie-year development, but a decent situation should make him productive early in his pro career.