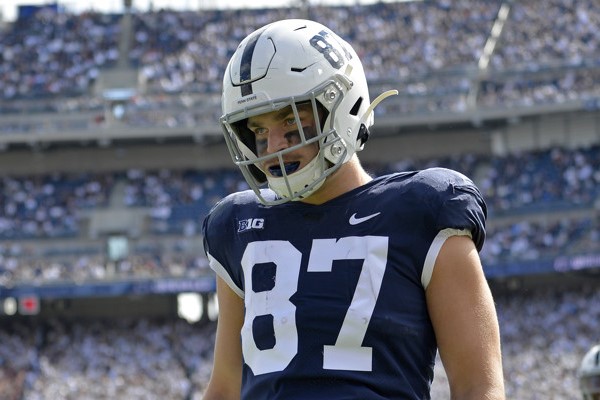 Pittsburgh has gone run-heavy lately, resulting in just 9 targets for Freiermuth over his last 2 games. He also registered his lowest route rate in a healthy game all season last week. We can't get too picky at TE, though, especially with 6 teams on bye this week. Freiermuth is a relatively strong play at the position.

Freiermuth enjoyed a nice debut season. The biggest questions for him in Year 2 will be: What does the offense look like with a new QB, and what does the reshaped pass-catching corps look like? Freiermuth figures to be a central factor regardless of the pieces around him. But those other pieces will affect things such as available opportunity and efficiency of the offense on whole. We’re betting on at least some decrease in team passing volume. What adds the most risk to Freiermuth in fantasy, though, is that early drafters like him inside the top 12. He certainly can finish there in Year 2, but we don’t see any reason to reach for the young Steeler rather than wait for some of the TEs we project ahead of him.

Steelers WR Diontae Johnson racked up 11 targets among 28 Kenny Pickett pass attempts in Sunday's win over the Falcons. That marked a 39.3% target share, in a game that saw no other Steeler top 5 looks. TE Pat Freiermuth finished 2nd, catching 3 of 5 targets for 76 yards. RB Jaylen Warren was the only other Pittsburgh player to catch more than 1 pass. WRs George Pickens and Steven Sims matched Warren at 2 targets. Pickens caught just 1 ball for 2 yards. Next for Pittsburgh comes the season's 1st matchup with the Ravens, who have been playing the run tougher than the pass.

Steelers TE Pat Freiermuth doubled his nearest teammate in targets in Sunday's loss to the Bengals. His 12 looks accounted for 28.6% of Pittsburgh's total pass attempts. Freiermuth's 8 catches also doubled the nearest Steeler, while his 79 yards trailed WR George Pickens' team lead. It's the 2nd 8-catch game among the past 4 for Freiermuth, who has seen 7+ targets in 4 straight and 7 of his 8 healthy outings for the year.

Steelers WR Diontae Johnson caught 4 balls for 63 yards on 5 targets to lead a lackluster passing effort in Sunday's win over the Saints. TE Pat Freiermuth tied Johnson for the team lead in catches. RB Jaylen Warren and WR George Pickens checked in next at 3 receptions apiece, with rookie TE Connor Hayward the only other Steeler to catch multiple passes. Week 11 brings a Bengals defense that has been better than New Orleans'.

The Bears are trading a 2nd-round pick to the Steelers in exchange for WR Chase Claypool, ESPN's Field Yates reports. It's a steep price for a guy who's been mostly disappointing since a flashy rookie season. Claypool ranks 52nd among 62 qualifying WRs in Pro Football Focus' 2022 receiving grades. His 1.03 yards per route run ranks 57th -- a bit behind teammates Diontae Johnson (1.16) and George Pickens (1.14). Of course, Claypool is still just 24 and brings a 6'4, 238-pound frame with 99th percentile athleticism. There's still intriguing fantasy upside here. Chicago is obviously a rough landing spot, though. QB Justin Fields has been better lately but remains a question mark as a passer. And this is the league's run-heaviest offense. The Bears rank dead last with just 20.0 pass attempts per game. That's climbed to 22.8 over the last 5 weeks -- but that's still not a workable number for Claypool. Consider him a WR4 unless we get a significant increase in passing volume from Chicago. Claypool's departure from Pittsburgh should mean more targets for Johnson, Pickens and TE Pat Freiermuth.

Freiermuth paid immediate dividends with 7 TDs on 60 catches. He missed just 1 game, but his 2 concussions from 2021 alone are worth monitoring. We'll see if Kenny Pickett (or Mitchell Trubisky) emerges as Pittsburgh's long-term answer at QB.