Strong enjoyed a terrific high school career in Arkansas that included starting duty at CB, WR and RB. He took over the backfield for his final 2 seasons, compiling 4,268 yards and 57 TDs. Despite earning state offensive player of the year honors as a senior, though, Strong carried 0 stars as a recruiting prospect and got no FBS scholarship offers (even from his home-state Razorbacks).

So he chose South Dakota State among a smattering of FCS options. And after redshirting in 2017, Strong started to deliver. He closed out 2018 by topping 100 yards rushing in 5 of the final 6 games and scoring in all 6. He averaged 44.4 yards per TD run across 11 scores. Strong led the team by 502 rushing yards despite ranking only 2nd in carries. He turned 32% of team RB rushing attempts into 44.5% yardage share and 39.3% TD share.

The following season brought a new challenge to Strong’s role in RB Isaiah Davis. Strong still continued to lead the backfield in carries and receptions, beating Davis by 35 rushes and 13 catches. But Davis averaged 8.5 yards per carry to Strong’s 5.4, beat him in total rushing yards and scored half the team’s ground TDs. Strong’s numbers were still enough to garner him all-conference honors and a finalist nod for the Walter Payton award (the FCS Heisman) for the COVID-altered campaign. (SDSU played in the spring.)


Strong led all of FCS in rushing yards his final season and ranked 2nd in ground scores. He earned 1st-team honors at both the all-conference and All-America level.

Strong’s tape seems to match up with his college numbers. He’s a physically gifted player in the speed department. He flashes in space. But he stops short of dominating.

It shouldn’t surprise anyone to see a 4.37 guy exploit open rushing lanes. We’re not going to bother with that kind of play here.

We certainly will bother with that guy creating the opportunity to flash that long speed.

And there seems to be good anticipation of approaching tacklers, though I wouldn’t say I got enough such plays to determine whether he truly stands out in that area.

I also saw only a few receptions, all in fairly short range. That’s not to say, of course, that Strong lacks ability in this area. One catch I did see, for example, came on an in route from the slot.

Where Strong might be deficient is on the power front. You might guess that from his size. The height’s fine. The weight is just 29th percentile among Combine RBs.

I didn’t see Strong getting knocked around in my 4-game sample, but I also didn’t see him winning with power.

Here he gets stopped with an arm tackle by a near-stationary defender:

Any deficiency on this front would only be amplified at the next level.

Player Profiler’s “best comparable” for Strong is Elijah Mitchell, and that strikes me as perfect.

Like Strong, Mitchell tested terrifically on the speed front. Even with his low weight for the position, the Jackrabbits star hits 95th percentile among NFL RBs in speed score.

Mitchell’s biggest issue as a draft prospect, though – at least in my evaluation – was that he didn’t stand out as much as you’d like vs. relatively low-level competition. In Mitchell’s case, he never took over the Louisiana backfield.

With Strong, my 1st question is the way he performed vs. Isaiah Davis the past 2 years. That’s either a reason to be concerned about Strong’s transition to the NFL … or it means that we should be looking out for Davis as a prospect over the next couple of years. (Both?)

As I said in the previous section, Strong looked good in the 4 games I watched. But he didn’t look like a dominant force, out of place among FCS competition.

Mitchell, of course, shed any concerns about his ability when he found immediate opportunity as an NFL rookie. I would be interested in Strong with opportunity as well.

Like with Mitchell, however, we’re likely looking at a Day 3 selection for Strong. And although the 49ers RB showed us what’s possible from even a 6th-round start, high fantasy upside (especially early) still isn’t likely from that range.

One other thing missing from Strong’s profile is return-game usage. That aspect obviously doesn’t matter for fantasy production in most formats, but success in that area could motivate a team to draft him earlier and be more likely to keep him around. Darrynton Evans, for example, hit the draft as a very similar prospect …

Success as a return man at Appalachian State, though – along with his backfield performance – helped him land in the 3rd round with Tennessee. Top targets at each position for Week 15 FanDuel tournaments. 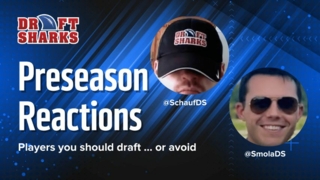