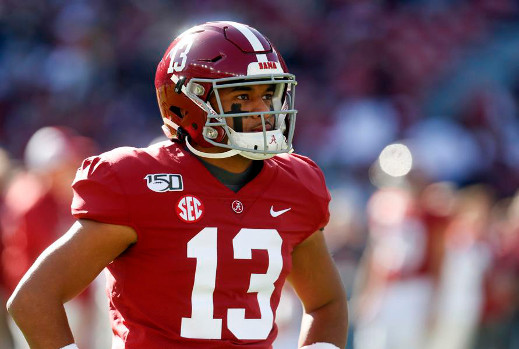 Tagovailoa first saw the field in September of 2017. But you were probably introduced to him later that season in the national championship vs. Georgia.

All as a true freshman. And all against a Bulldogs defense that allowed just 169 passing yards per game.

As a sophomore, Tua set Alabama single-season records with 3,966 yards and 43 TDs. He added a whopping 11.1 YPA. Tua’s raw numbers would have been even better had Alabama not sat him in the 2nd half of several blowouts.

His momentum continued into 2019. A 71.4% completion rate set a career high, as did his 11.3 YPA and 143.3 passer rating. Tua’s sample wasn’t large, however, as he went down in a November 6 game at Mississippi State. A dislocated right hip with a posterior wall fracture ended his ‘Bama career.

Tua underwent November surgery and now claims to be fully healthy. He seemed to move around just fine in a recent pro day display. Beyond that, two surgeons involved in Tua’s surgery say he’s on track to participate in training camp.

Good news for sure. Still, some teams might proceed cautiously because they’re unable to evaluate Tagovailoa ahead of the NFL Draft.

When he stuck on the field, Tua was a polished distributor for an Alabama offense that featured one of the nation’s best WR corps. Let's dive in.

Accuracy is the most translatable trait when projecting college QBs to the pros. Tua clearly checks that box.

Let's start with a common play-action concept from Alabama's offense. Here, we see his ability to turn his back to the defense, quickly process the coverage, and then fire a dart in stride.

Tua didn't just dominate in the short to intermediate ranges. Pro Football Focus also graded him well above average as a deep passer.

Bonus points here for the depth of the throw -- and for doing so under pressure (another area of strength). Per PFF, Tua recorded 10.9 YPA and a 64.9% completion rate when blitzed.

While Tua doesn't have top-tier arm strength, I don't see it as a negative. This next clip shows a pass with plenty of zip. The ball placement here is excellent -- up the seam, over the linebacker and in front of the safety.

Movement inside the pocket is a huge asset for Tua. The next clip is an extreme example, but credit him for keeping his eyes downfield.

There's not much to debate about Tagovailoa's accomplishments at Alabama. He compiled huge raw numbers and elite efficiency -- all while playing in the SEC. The 22-year-old has everything you want in terms of accuracy, anticipation, decision-making and poise.

So he looks like a day 1 NFL starter. Yet the question remains: Will his body allow it?

That's an answer we'll only get with time. Even if he's healthy enough to start Week 1 (or shortly thereafter), there's a risk he develops an arthritic condition in his hip long-term. Given that -- and the league-wide depth at QB -- Tua isn't someone to chase in rookie drafts.