The Colts aren't really pulling their weight in the Vegas projections for the Sunday Night Football game.

At least the matchup lines up for Jonathan Taylor's purposes. Dallas arrives as the 2nd-worst QB-scoring matchup by our adjusted fantasy points allowed and #1 in Football Outsiders' pass-defense DVOA. The Cowboys aren't a pushover on the ground, but they've been only about half as much of a drain on RB scoring.

The Colts, meanwhile, come in as the 2nd-worst scoring matchup for WRs on the year. That doesn't seem like great news for Cowboys WR CeeDee Lamb. But Indy will miss slot CB Kenny Moore, which improves the spot for a wideout who spends about half his time in the slot.

Of course, there are many other players to consider here. Does Tony Pollard continue to win the split with Ezekiel Elliott? Will Jelani Woods even play just a week after his breakout game?

Let's check the value charts for some DFS lineup advice ... 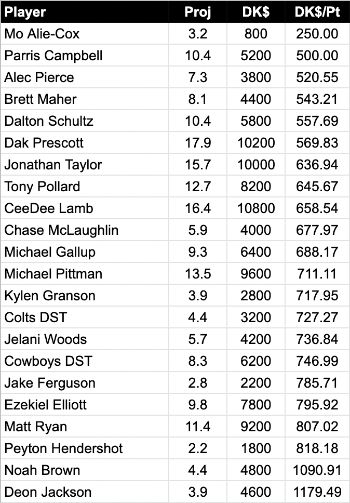 Remember when the Colts tallied 25 points and 415 total yards to beat the Raiders in interim HC Jeff Saturday's debut? They have since fallen short of 300 yards twice, scoring 16 and 17 points. Five of their past 6 games have found Indy falling short of 20 points. And Dallas arrives to this one as the league's #1 overall defense by Football Outsiders' DVOA.

It doesn't look like a good time to bet on big numbers from the Colts offense.

But we have to play at least 1 guy, so cheap and sneaky might just be the way to go. We got more than we could have ever hoped from TE Jelani Woods in that category last Monday. He might not play tonight because of illness, though. Woods' absence would help Mo Alie-Cox, who already tops our chart here.

Fellow Colts TE Kylen Granson might not even need Woods to sit, though. He was already the team's receiving leader at the position. But Granson missed the Steelers game, which opened up opportunity for Woods. Now Granson checks in $1400 cheaper than Woods in DK salary. And his projection would improve if Woods sits. 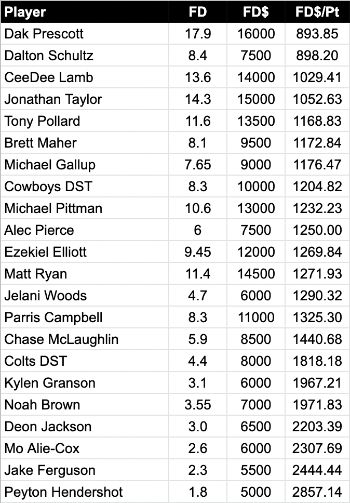 Dalton Schultz looks underpriced on FanDuel, which is surprising coming off a 2-TD game. I guess we should blame his mere 7 catches and 53 yards total over the past 2 games. but that followed 3 straight outings with at least 5 catches. Two of those came in lopsided Dallas victories. So don't fear a blowout tonight in deciding whether to play Schultz.

The Colts hit this game as a neutral scoring matchup for TEs but rank just 28th in TE-coverage DVOA, according to Football Outsiders.