We spent the past 2 months scouting this year’s rookie class for future fantasy value.

The rankings, of course, will change after the NFL Draft. But it’s helpful to get a lay of the land before landing spots and draft capital enter the equation.

We’ll get together post-draft to hash out a unified set of rankings for your dynasty rookie drafts.

But for now, check out the top 30 overall rankings, followed by some commentary on guys we’re significantly higher or lower on vs. Fantasy Pros consensus. Below that you’ll find individual positional rankings. 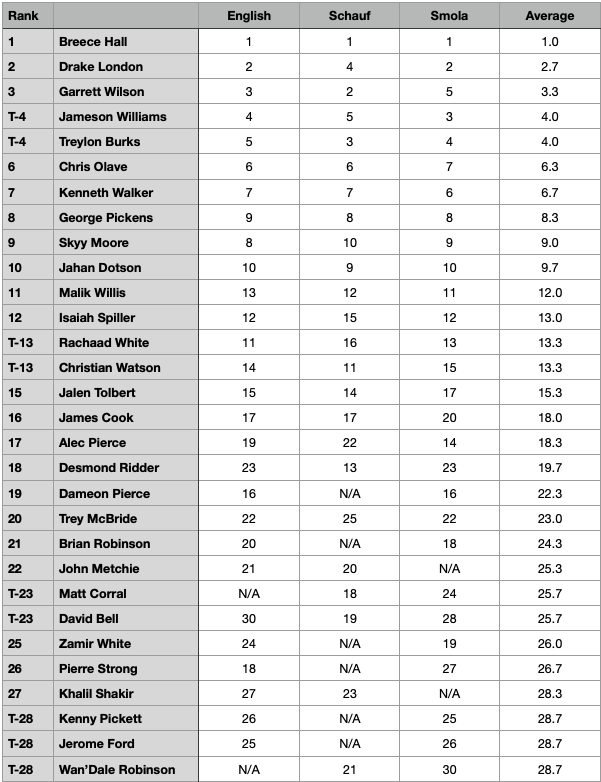 With Michael Pittman and Amon-Ra St. Brown in the pros, London enjoyed his breakout last fall. His 88-1,084-7 line turned up top-end marks in target share (35.7%), yards per route run (3.52) and PFF grade (91.8, a top-5 tally in the country). He’s a physical mismatch at 6’4, 220 pounds and showed an ability to win at all levels of the field. Turning just 21 in July and only a couple of years removed from playing on the USC hoops team, London looks like a high-ceiling prospect going forward.

What do we like in fantasy football? Big plays and TDs. Williams will provide them both after averaging 19.9 yards per catch with 15 scores last year. We didn’t get a 40 time from him in the pre-draft process, but turn on the tape and it’s obvious that he has freaky speed. His torn ACL doesn’t bother me considering how good modern medicine is. And his 2 quiet seasons at Ohio State are easy to overlook after he posted a 79-1,572-15 line as a junior against SEC competition.

Moore checks boxes for long speed, short-area quickness, production and route running. His 1.46-second 10-yard split was actually among the best of any WR at the Combine. Moore’s on the shorter side (nearly 5’10), but he’s stout at 195 pounds. His college tape showed he at least has a chance to play inside and out in the pros. Being a likely top-50 pick (Kansas City? Cleveland?) doesn’t hurt, either.

White broke out as a senior with 182 carries, 1,006 yards and 15 scores. He added 43-456-1 as a receiver, giving him the 2nd most receptions of any RB in this class (7th most in the nation). That receiving ability is what’s really exciting, but I thought he also had above average rushing tape. Plus, his Combine showing confirmed that he’s well equipped with NFL-caliber athleticism (106.3 Speed Score).

The primary difference between me and the consensus here is that they have a ‘meh’ cloud of RBs boosted ahead of more attractive WRs. There will be some RB movement for me after the draft, but this class doesn’t have many backs I’m willing to plant a flag with.

As for Tolbert, I like the size and speed, and I love the numbers. I understand that he broke out fairly late and will hit the league a little old for a prospect. But he also sits 11th among WRs on Arif Hasan’s consensus big board, just 1 spot lower at the position than where I have him.

Tolbert’s downfield profile should help his chances of early fantasy relevance, especially if he lands in a good spot. That also gives him an edge over John Metchie and his recovering ACL.

Cook’s receiving ability separates him from many in this class. On film, he’s a smooth mover with the route running and burst to threaten LBs from any alignment. He never dominated the backfield work at Georgia, but at least some of that comes from a loaded depth chart. Cook also tips the scales at ~200 pounds, so we’re not looking at a potential 3-down option. Still, I think his two-way skill set gives him an Austin Ekeler-like ceiling down the road.

Pierce’s college production profile is admittedly mediocre. But he left school with a big career 17.5 yards-per-catch average and pops as a big-play threat on tape. Pierce goes 6’3, 211 pounds with a 4.41-second 40 time and springy 40.5-inch vertical. He might never develop into a #1 WR as a pro, but he has the skill set to score fantasy points with big plays and TDs.

I’m not sure this is actually how early I’d start looking QB … but it might be.

At RB, there’s Breece Hall, then what looks like a tier break to Kenneth Walker … and then a lot of uncertainty. At WR, it gets a little murky beyond the top 9. The TEs stink.

The QBs ain’t great either, but Ridder sure seems a lot closer to Malik Willis than the consensus indicates. He racked up 2,180 rushing yards (even with sack yardage removed) across 4 years as starter, and backed that up with elite speed at the Combine (4.52-second 40, 98th percentile among QBs). Ridder was also an efficient passer (87 TDs to 28 INTs career) and has been lauded for his ability to read defenses.

The primary knock has been some inaccuracy. I can deal with that.

Of course, if Ridder lingers on the NFL Draft board well into Round 2, you can bet I’ll be adjusting him down.

Knock the competition if you want, but Strong posted a massive 4,495 rushing yards and 43 TDs across 4 seasons. He offers plenty as a pass catcher, too (63 career catches). Strong excelled at the Combine, most notably in the speed testing (4.37-second forty; 1.50-second 10-yard split). My hope is that he’s drafted by the end of Round 4, but a slide to late Day 3 is certainly possible.

Wilson is a fun watch; a dynamic mover. He’ll get open in the NFL and make plays after the catch. But, even with stiff target competition, it’s slightly concerning that he never led Ohio State in receiving. And, at just 183 pounds, I wonder if Wilson’s slight frame will be more of an issue in the pros. To me, Drake London, Jameson Williams and Treylon Burks bring more fantasy upside.

Walker’s my RB2 — I’m buying him as a lead ball-carrier right away. I just think the doubts about his receiving ability (he caught 19 balls across 3 college seasons) push the 1st-round WRs ahead right now.

It’s not so much that I have a specific problem with Spiller. I just don’t see what separates him so significantly from the rest of the class. Spiller’s pre-draft testing went infamously terribly. Perhaps that’s why he didn’t dominate backfield work in his final season. No. 2 RB Devon Achane trailed him by just 49 carries and 1 reception, and beat Spiller in both yards per rush and yards per catch. Spiller’s previous 2 seasons also featured teammates beating him in per-carry efficiency. Maybe he’ll move up my board if draft capital agrees with the separation fantasy drafters are giving him, but I don’t see it.

I’m lumping Pierce and Robinson together, because they’re both held down by the same issue.

Most of this RB class looks like a glob of dudes that will need draft capital to start sorting them. Robinson delivered strong final-year production and then a terrific speed score (85th percentile). If he lands somewhere in Round 3, I’m in.

Pierce put some good stuff on tape and won in some PFF categories, as Jared mentioned in a recent podcast. He intrigues me as well.

But what if both these guys land in Round 5 (or worse)? I was a bigger fan of Kenneth Gainwell at this point last year.

So I’ll head into the NFL Draft leaning WR over RB through most of the early rounds in rookie drafts. We’ll see whether the league tells me to respect some of these backs more.

Jared’s rank: outside the top 30

Would folks like Metchie as much if he didn’t wear an Alabama jersey? He never topped a 25% share of receiving yards or an 18% share of receiving TDs across 3 college seasons. He finished outside the top 50 WRs in PFF receiving grades every year. And his tape looked just fine to me. At 5’11, 187 pounds, Metchie looks like a low-upside slot receiver.

Let’s start with the positive: Bell had an awesome career at Purdue, posting 232-2,946-21 across 3 seasons. He’s young (21) and brings a refined, pro-ready skill set to the pros. Now for the reality check. Bell flunked the pre-draft testing, with his 40-time, 10-yard split, vertical, broad jump, 3-cone and 20-yard shuttle all below average to downright bad. Physically, he brings decent size (almost 6’1, 212), but his arm length and wingspan are both middle of the road.

I just don’t see a dynamic guy who’ll thrive in the NFL. Think Tyler Johnson from 2020. Perhaps Bell sticks as a real life WR3, but short of a perfect landing spot, I’m unconvinced of a high ceiling.

White caught 17 passes across 3 college seasons. He tallied just 15 as a starter over the past 2 years, while RB teammates collected another 81.

So we shouldn’t expect him to catch passes. And it’s not like he was dominating the carry numbers or rushing efficiency. So what’s the hopeful upside path here? Speedy LeGarrette Blount? Jordan Howard?

Someone else will definitely pick White in rookie drafts before I’m interested. 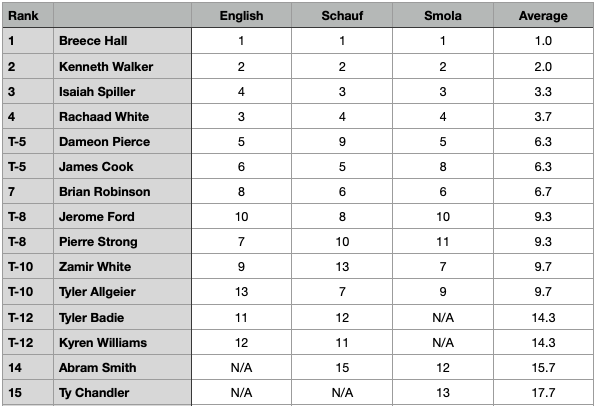 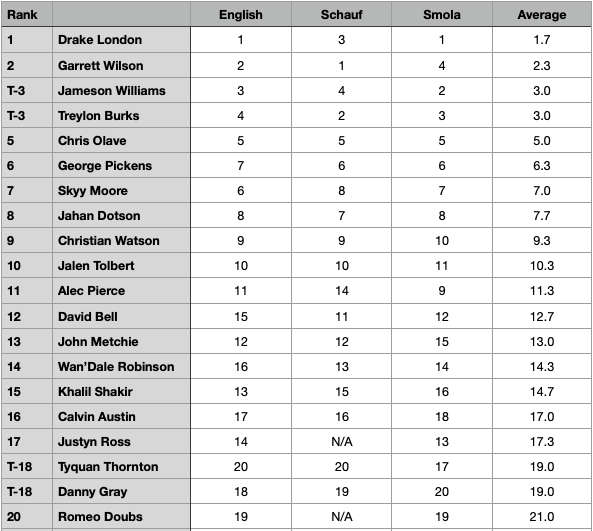 We're wrapping this dynasty fantasy football miniseries with TEs ... and the guys did NOT always agree. Find out who created a stir -- and who Jared deemed the BEST "sell" on the market ... Dalton Schultz got the franchise tag a year ago. Will he hit the open market this time? Find out who the contract uncertainty might help and who you should avoid in dynasty trades. The 2023 free agent WR class looks ugly. And that might be a kind take.