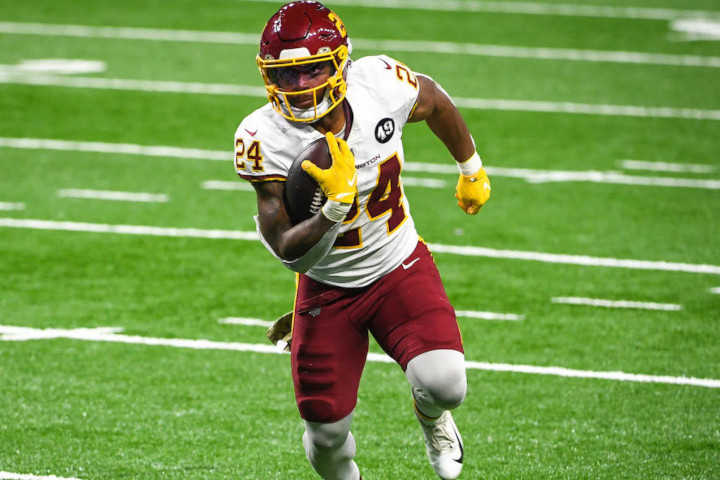 Washington RB Antonio Gibson’s usage was a bit worrisome. He played 8 of 14 snaps (57%) with the 1st-team offense and ran a pass route on 3 of QB Ryan Fitzpatrick’s 7 drop backs (43%). Gibson wasn’t out there for any of the four 3rd-down snaps and lost a short-yardage chance to Peyton Barber.

QB Cam Newton got the start for the Patriots, playing the first 2 series. Rookie QB Mac Jones then played the next 5 with mostly the 2nd-team offense. Newton finished 4-of-7 for 49 yards, while Jones went 13-of-19 for 87 yards.

There’s been talk of Sony Michel being a “1B” to Damien Harris’ “1A” in the Patriots backfield. But it was Harris getting all 4 carries with Newton and the starters on Thursday night. In fact, Michel didn’t get on the field until QB Mac Jones entered.

Patriots rookie RB Rhamondre Stevenson ripped off 127 yards and 2 scores on 10 carries, highlighted by a 91-yard TD. (Here are all 10 of his carries.). Note, though, that he didn't hit the field until midway through the 3rd quarter. And most of his damage came against defenders that won't make Washington's final roster.

With WR Nelson Agholor sidelined, it was Jakobi Meyers and N’Keal Harry on the field in the Patriots’ 2-WR set. Kendrick Bourne entered when New England went 3 WRs.

Steelers RB Najee Harris played 12 of 17 snaps with the 1st-team offense. RB Anthony McFarland played the other 5 and looks like the clear favorite for the #2 role. But Harris is going to be an absolute workhorse this season.

Eagles TE Dallas Goedert was on the field for only 5 of starting QB Jalen Hurts’ 10 snaps. TE Zach Ertz played 7 of those 10 snaps. Both guys ran a pass route on 5 of Hurts’ 8 drop backs.

Eagles WR Quez Watkins’ 79-yard TD came from backup QB Joe Flacco. But Watkins got run with the 1st-team offense (with WR DeVonta Smith out) -- and was overthrown by QB Jalen Hurts for a potential 98-yard score.

Some curious usage in this one for Titans TE Anthony Firkser, who played just 2 of 10 snaps with the “starters.” I say “starters” because guys like QB Ryan Tannehill, RB Derrick Henry and WRs A.J. Brown and Julio Jones didn’t play at all in this one. So it’s possible that Firkser got just limited action because the Titans wanted to see their backups. But his usage will be worth monitoring next week.

The Falcons didn’t play any regulars in this one.

Bills QB Josh Allen and WRs Stefon Diggs, Emmanuel Sanders and Cole Beasley all sat this one out.

Bills RB Devin Singletary got plenty of run with RB Zack Moss sidelined with a bum hamstring. Singletary flashed more burst than we saw from him last year, finishing with 8 carries for 42 yards and a 6-yard receiving score. Hopefully we’ll get to see what his backfield looks like with Singletary and Moss next week.

Lions rookie WR Amon-Ra St. Brown played only in 3-WR sets. He lined up mostly in the slot but also got a snap in the backfield (that play was negated by a penalty). He officially played 11 of 22 snaps (50%) with the starters and ran a route on 7 of Goff’s 11 drop backs (64%).

Cowboys WR CeeDee Lamb did play -- and notably played all 11 of his snaps on the outside. It’s confirmation that he’ll be moving out of what was essentially a full-time slot role last season. And it means that Lamb should stay on the field when Dallas goes to 2-WR sets.

Cowboys TE Blake Jarwin got the start and played 12 snaps -- another step in his return from last September’s torn ACL. TE Dalton Schultz didn’t play in this one due to an ankle injury.

The Cardinals held out WRs DeAndre Hopkins and A.J. Green but played WRs Rondale Moore and Christian Kirk. And their usage was noteworthy. Moore was in the slot for 14 of 16 snaps over the first 2 series, while Kirk played all 9 of his snaps on the outside. If that’s how Arizona is viewing these guys, it probably means Kirk is battling Green for the outside WR job, with Moore the slot starter.

Dolphins RB Malcolm Brown got the start and out-snapped RB Myles Gaskin 16 to 7 with the 1st-team offense. Gaskin then played into the 2nd quarter with Miami's backups. HC Brian Flores basically said after the game that we should expect a committee backfield this season.

Dolphins rookie WR Jaylen Waddle played 19 of 23 snaps with QB Tua Tagovailoa and the 1st-team offense. He was in the slot for 10 of those snaps and out wide for the other 9. WRs Will Fuller and DeVante Parker both missed this one, but it’s still encouraging to see Miami trust Waddle in multiple alignments.

The Dolphins used a TE rotation of Mike Gesicki, Adam Shaheen and Durham Smythe with the 1st-team offense. Gesicki ran a route on only 4 of Tagovailoa’s 11 drop backs (36%).

Bears QB Andy Dalton got the start, completing 2 of 4 passes for 18 yards on 2 series. Rookie QB Justin Fields then played the next 7 series. He was shaky early but got rolling with a nice FG drive late in the 1st half. Fields then scored an 8-yard rushing TD and a 30-yard passing TD in the 3rd quarter, putting his off-script playmaking ability on display. He finished 14 of 20 for 142 yards, 1 TD and 0 INTs -- plus 5 carries for 33 yards and the score.

Both Broncos QBs looked good in this one. Drew Lock got the start and completed 5 of 7 passes for 151 yards and a pair of scores on 3 series. He chucked an 80-yard bomb to WR K.J. Hamler and also had a 4-yard TD to WR Trinity Benson. QB Teddy Bridgewater played the next 2 series, finishing 7-of-8 for 74 yards and 1 TD.

Broncos RB Melvin Gordon was sidelined with a “minor” groin injury, so rookie RB Javonte Williams got the start. He ripped off 11 and 13-yarder on his first 2 totes, finishing with 5 carries for 29 yards. He also had a 4-yard TD nullified by a holding penalty.

Saints QBs Taysom Hill and Jameis Winston played to a draw in this one. Hill got the start and completed 8 of 12 passes for 81 yards, 0 TDs and 1 INT. Winston went 7 of 12 for 96 yards, 1 TD and 1 INT in relief. Among 72 qualifying QBs, Hill ranked 9th in Pro Football Focus’ passing grades; Winston 15th.

With Saints WRs Michael Thomas and Tre’Quan Smith sidelined, Marquez Callaway operated in an alpha role. He was on the field for all 20 snaps with starting QB Taysom Hill and ran a route on all 13 of Hill’s drop backs. Callaway finished with 3 catches on 4 targets for 61 yards.

Saints TE Adam Trautman played 15 of QB Taysom Hill’s 20 snaps (75%) but ran a route on only 6 of Hill’s 13 drop backs (46%). He’s a long shot for TE1 production if that usage continues into the regular season.

Browns WR Rashard Higgins out-snapped WR Donovan Peoples-Jones 22 to 15 with the “1st-team offense.” So Higgins might still be the #3 WR here, despite Peoples-Jones’ strong camp.

The RB pass routes with Lawrence:

Even with Tevin Coleman out, Michael Carter didn’t lead the Jets RBs in 1st-team snaps. He played 9 of QB Zach Wilson’s 22 snaps (41%), while Ty Johnson played 13 (59%). Johnson also beat Carter 3 to 2 in pass routes. The rookie still has some depth-chart climbing to do.

Five WRs played at least 1 snap with Wilson. Denzel Mims wasn’t 1 of them. Then he played 33 snaps with the backups. Despite recent positive reports, Mims still seems buried on the depth chart.

While most of the Giants’ starters didn’t play, RB Devontae Booker played all 10 snaps on the first 2 possessions before giving way to RB Corey Clement. Booker still looks like the Saquon Barkley handcuff.

Leonard Fournette got the start in the Bucs backfield -- but Fournette, Ronald Jones and Gio Bernard all played 2 of QB Tom Brady’s 6 snaps. Bernard was on the field for both 3rd downs.

Texans RB Phillip Lindsay out-snapped RB David Johnson 8 to 2 with the 1st-team offense. Lindsay played every 1st and 2nd down, while Johnson came in for both 3rd downs. RBs Mark Ingram and Rex Burkhead didn’t play.

The Packers rested QB Aaron Rodgers and all of their key offensive skill guys.

Chiefs RB Clyde Edwards-Helaire got feature-back usage in this one. He played all 4 snaps with QB Patrick Mahomes -- and then the next 6 snaps with QB Chad Henne and the rest of the 1st-team offense. CEH carried 4 times for 16 yards and caught his 1 target for 5 yards. Darrel Williams was the next back in for the Chiefs.

49ers QB Trey Lance had an up-and-down night. You probably saw his 80-yard TD to WR Trent Sherfield. He also had a 35-yarder to TE Charlie Woerner and was hurt by 3 drops by his WRs. But Lance also took 4 sacks and had 2 would-be INTs dropped by Chiefs defenders.

49ers RB Trey Sermon played 10 of 12 snaps with the 1st-team offense. RB Wayne Gallman played the other 2. RB Raheem Mostert sat this one out, but we can at least say that Sermon already has a top-2 spot on the depth chart.

The Seahawks sat all their notable starters.

The Raiders sat most of their notables, with the exception being WR John Brown. That seems like confirmation that he’s not 1 of Vegas’ top 3 WRs. (Henry Ruggs, Bryan Edwards and Hunter Renfrow all got the night off.)

Both teams rested their key starters in this one.

Chargers RB Joshua Kelley out-snapped RB Justin Jackson 19 to 10 with starting QB Chase Daniel. Kelley then played 9 more snaps, while Jackson was done for the day. No real clarity there.

Panthers rookie WR Terrace Marshall looked awesome, hauling in 3 of 5 targets for 88 yards -- highlighted by this 60-yard catch and run. Also encouraging is that Marshall played 12 snaps in the slot and 9 on the outside. Carolina seemingly plans to use him in multiple spots.

The Colts sat most of their notable skill guys. WR Parris Campbell played 10 snaps, hauling in his lone target for 37 yards.