Editor's Note: This article originally included Ravens WR DeSean Jackson. Jackson was not elevated from the practice squad and won't play vs. the Panthers.

Playing Allen is a bet on him meaningfully out-scoring Justin Fields, who’s $900 cheaper. It’s a bet I’m willing to make. Fields has been the tournament-winner the past 2 weeks, but it was Allen who topped 30 DK points in 5 of his first 7 games.

If we’re paying $8,500 for Allen, we need him to put up 30+ DK points to win a tourney. And if he does that, it’s likely that 2 – or maybe even 3 – of his pass catchers also have big games. So it makes sense to at least double stack with Allen – and triple stacking with a cheap Knox is viable.

When we last saw the Bengals, RB Joe Mixon popped in 5 TDs and scored 58.1 DK points. So it’s no surprise that Mixon is expected to be 1 of the most popular RB plays on this slate – and Burrow is coming in at 4% projected ownership.

Playing Cincinnati’s passing game gives us big leverage against all the Mixon teams. Every TD Burrow throws scores us points AND takes potential points away from Mixon (unless it’s a passing TD to Mixon, of course).

Sunday’s matchup vs. the Steelers is better for the Bengals passing game anyways. Over the past 5 weeks, Pittsburgh sits 17th in Football Outsiders pass defense rankings and 3rd in run defense. For the season, the Steelers rank 20th in adjusted fantasy points allowed to QBs, 29th against WRs and 11th against RBs.

We want exposure to this Cowboys-Vikings game. It’s in a dome. Its 48.5-point over/under is 3rd highest on the main slate. Both offenses rank top 7 in situation-neutral pace. And both defenses rank bottom 9 in plays against.

I prefer the Prescott side to the Cousins side. The Vikings rank 5th in Pass Rate Over Expected Against, 15th in Football Outsiders’ pass defense DVOA and 16th in adjusted fantasy points allowed to QBs.

Plus, Lamb and Schultz give us access to a big chunk of Prescott’s passing production. Over Dallas’ last 3 games, those 2 guys have accounted for 49% of the team’s targets, 55% of the receptions, 66% of the receiving yards and 67% of the receiving TDs.

I’ll be fading Joe Mixon ($7,400) at 19% projected ownership for the matchup reasons noted above. Dameon Pierce ($6,500) is also a fade for me for the 2nd straight week. He has a tough draw vs. the Commanders and only has 1 tournament-winning performance this season.

Taylor got the horsiest of workhorse usage last week. He played 94% of the Colts’ offensive snaps, ran a route on 85% of pass plays and handled 22 carries and 2 targets. Maybe the return of RB Deon Jackson slashes Taylor’s volume this week – but maybe it doesn’t. It’s Deon Jackson, after all.

Taylor draws a plus matchup on Sunday against a struggling Eagles run defense. Philly has coughed up 4.6 yards per carry to RBs over the past 5 weeks, ranking 31st in Football Outsiders’ run defense DVOA during that span.

Taylor is projected for just 11% ownership.

Jacobs has continued to dominate backfield work for the Raiders, tallying 20+ opportunities (carries + targets) in 5 of his last 6 games.

That stretch started with a huge game against the Broncos. Jacobs carried 28 times for 144 yards and 2 TDs in that one, adding 5 catches on 6 targets for 31 yards.

Denver rolls into the rematch sitting 20th in Football Outsiders’ run defense rankings and allowing 4.5 yards per carry to RBs over the past 5 weeks.

I’ll likely have 1 of these Washington RBs in every tournament lineup I make.

Washington went run heavy in last week’s win over the Eagles, resulting in 40 combined carries for Gibson and Robinson. We could see a similar outcome this weekend. The Commanders are 3-point favorites vs. a Houston squad sitting 32nd in Pass Rate Over Expected Against, 31st in Football Outsiders’ run defense rankings and 32nd in adjusted fantasy points allowed to RBs.

I prefer Gibson among these 2 because of his pass-catching role and big-play ability. But Robinson saves you a few hundred bucks and is the favorite to lead in carries.

I highlighted Courtland Sutton ($6,000) and Parris Campbell ($4,300) in the cash-game article and will be playing both in tournaments at their respective ownership projections – Sutton 16% and Campbell 8%.

The 1st of those came vs. the Patriots, who are a nice schematic matchup for Wilson. As CBS’ Jacob Gibbs points out, New England plays man coverage at the 3rd highest rate in the league. Wilson sees more targets and is more efficient vs. man coverage than zone.

If the rookie has another big game on Sunday, this is the last time we’ll see him anywhere close to this cheap.

You could certainly argue that Collins has become Houston’s #1 WR. Here are how his numbers stack up with Brandin Cooks’ in their last 5 games together: 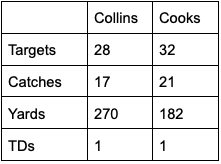 So we’ll gladly take the $1,300 discount from Cooks to Collins for Sunday’s plus matchup vs. Washington’s 31st-ranked WR defense. I particularly like the idea of a mini game stack with Collins plus 1 of the Commanders RBs.

Be open to using a TE at flex this week. There are strong relative values at the position – and pricing is tight, so a cheap TE at flex can really open things up.

Schultz checks in as the top dollars-per-point value at TE – and across all flex-eligible positions.

Finally over that nagging knee injury, he’s averaged 6.7 targets on a 20% share over his last 3 games. The fact that he’s still sitting on just 1 TD this season is keeping his price and ownership (11% projected) down.

A concussion and lack of TDs have masked a really strong sophomore season from Freiermuth. He’s averaged 7.6 targets on a big 22% share in 7 healthy games this season. Travis Kelce and Mark Andrews are the only TEs averaging more than 7.6 targets per game.

Freiermuth has averaged 4.9 catches and 56 yards in those 7 outings. His PPR scoring average would be good for 6th at his position.

He gets a Bengals defense on Sunday that sits 7th in Football Outsiders’ TE coverage rankings and 9th in adjusted fantasy points allowed to TEs. But Freiermuth didn’t have much trouble with the matchup back in Week 1, posting a 5-75 line on 10 targets.

I tend to shy away from guys coming off high-ankle sprains in season-long fantasy lineups. But DFS tournaments are the perfect spots to take a shot. We’re much less concerned about the floor and much more interested in the upside.

Njoku flashed plenty of upside before going down with that injury. He topped 14 DK points in 3 of 7 games to open the season, including a 23.9-pointer in Week 3. Only Travis Kelce and Mark Andrews scored more total PPR points than Njoku through Week 7.