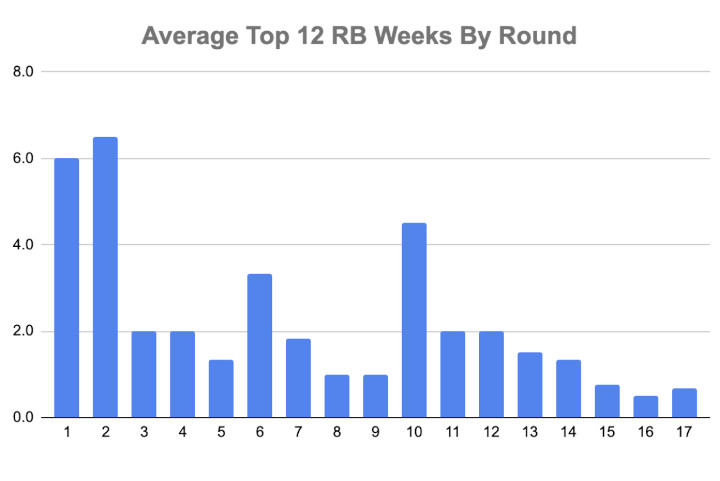 We know we want high-scoring spike weeks from the players on our best-ball rosters. That’s especially true in Underdog’s Best Ball Mania 3, which requires us to finish 1st out of 10 teams in Week 15, 1st out of 16 teams in Week 16 and then 1st out of 470 teams to win the $2 million grand prize in Week 17. We need big weekly upside to hit those high-end outcomes.

But where do we find weekly upside in Underdog drafts?

We can look back at 2021 results for clues. This season won’t play out exactly like last year, of course. So it’s important to not take 2021’s results as gospel. But we can use it as a blueprint to get a general idea of the areas of the draft we should be targeting each position to maximize our chances of capturing those spike weeks.

Let’s dive into the data …

I then grouped players into their ADP round in last year’s Underdog Best Ball Mania 2. From there, I calculated the average number of “elite” weeks you were expected to capture by drafting a certain position in a certain round.

Let’s check out the data and draw some conclusions for each position individually. Then we’ll look at the overall draft landscape. 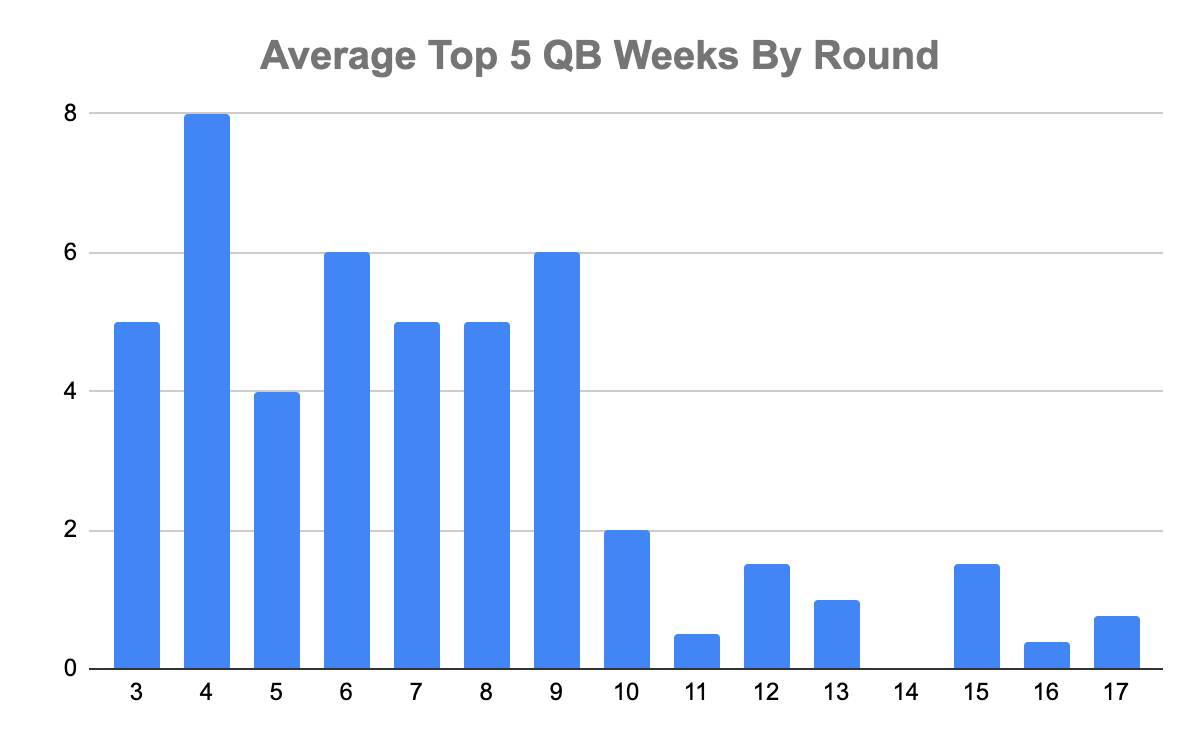 We’re in an era of elite, oftentimes dual-threat QBs. And fantasy drafters know it, pushing those guys higher and higher in ADP.

No round later than the 10th last year presented an average of more than 1.5 top-5 QB weeks.

2022 Takeaway: If you want a chance at a QB who’s going to provide more than a few top-5 weeks, you’ll likely need to spend a relatively early pick. QBs have been pushed even higher this year, with 12 sitting inside the first 8 rounds in ADP (vs. 9 last year). 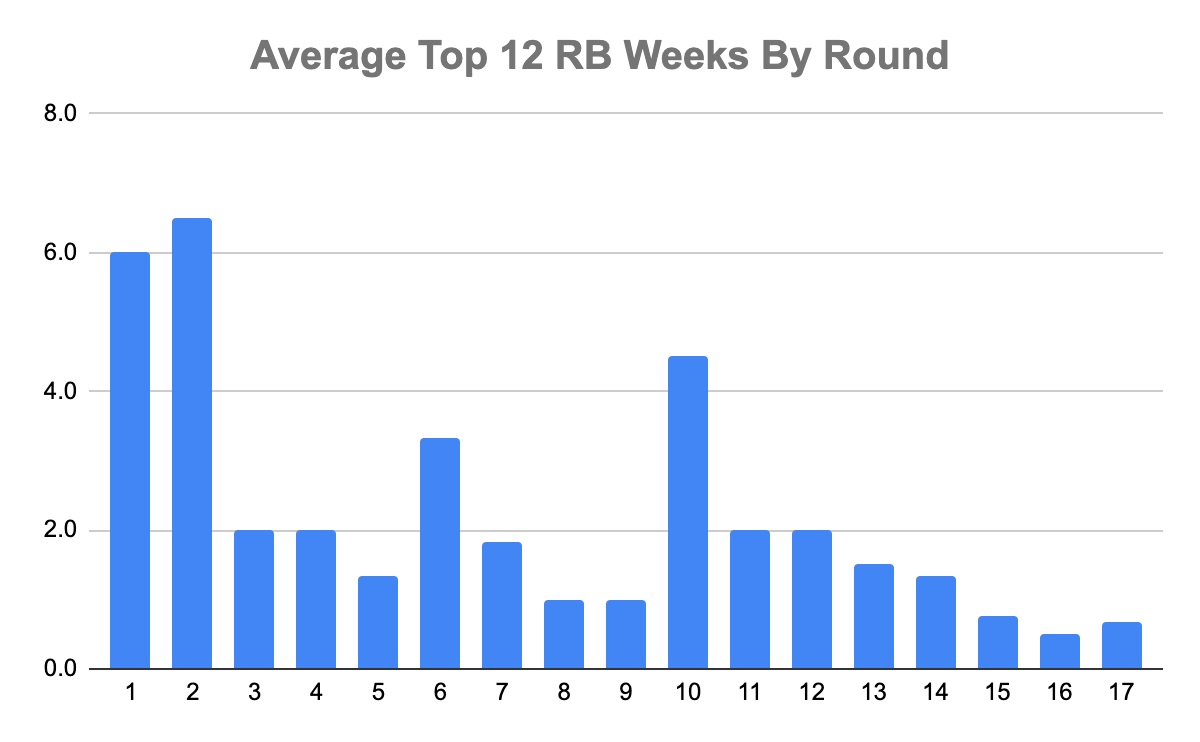 For all the talk about the injury-induced unpredictability of RBs, drafters did a nice job identifying where the elite weeks would come from last year. Top-12 RB weeks were extremely concentrated at the top of drafts, with 43% of them coming from guys drafted in the first 2 rounds.

After that, things got flat. Only 2 rounds from the 3rd on presented more than 2.0 top-12 RB weeks on average: the 6th and 10th. Round 10 looks like a one-off outlier, housing 2021 league winners Leonard Fournette and James Conner (along with Melvin Gordon and Tony Pollard).

2022 Takeaway: I did similar studies as this one back in 2015 and 2019 and found usable fantasy weeks highly concentrated in the first 2 or 3 rounds of drafts. So I’m fairly confident that we can call that a trend.

With RBs getting pushed down in ADP, though, I do think that we can find high-volume spike-week producers in Round 3 (Nick Chubb, Javonte Williams, James Conner) and maybe even Round 4 (Travis Etienne, Cam Akers) this year. 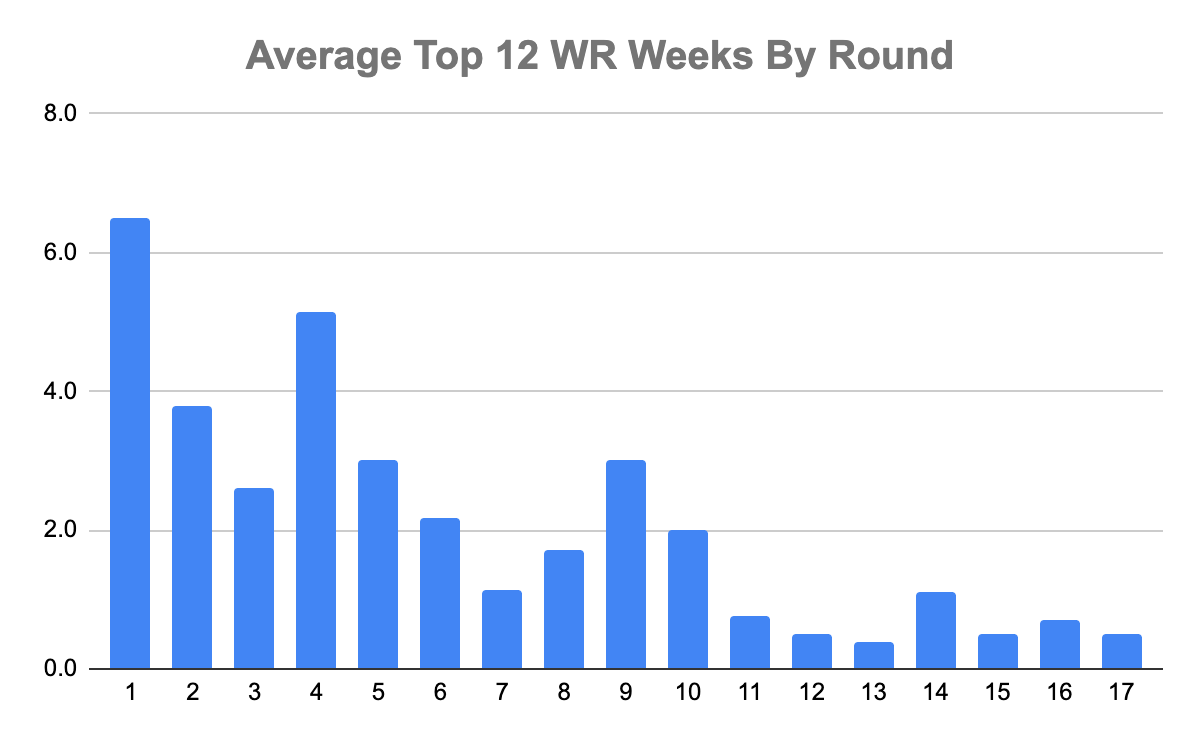 Cooper Kupp played a big part in that, though. He easily led the league with 14 top-12 scoring weeks, boosting the Round 4 average to 5.1 top-12 weeks. The 6 other WRs who went in the 4th round last year averaged 3.7 top-12 weeks.

But there were plenty of elite weeks to be found in the next few rounds, with the 5th, 6th, 9th and 10th all providing an average of 2.0+ top-12 weeks.

2022 Takeaway: We need to spend early draft capital at WR for our best shot at elite weeks. But the depth of the position means there should be a good number of top-12 weeks to be found in the 5th through 10th round range. Just be careful not to rely too much on late-round WRs for elite weeks. 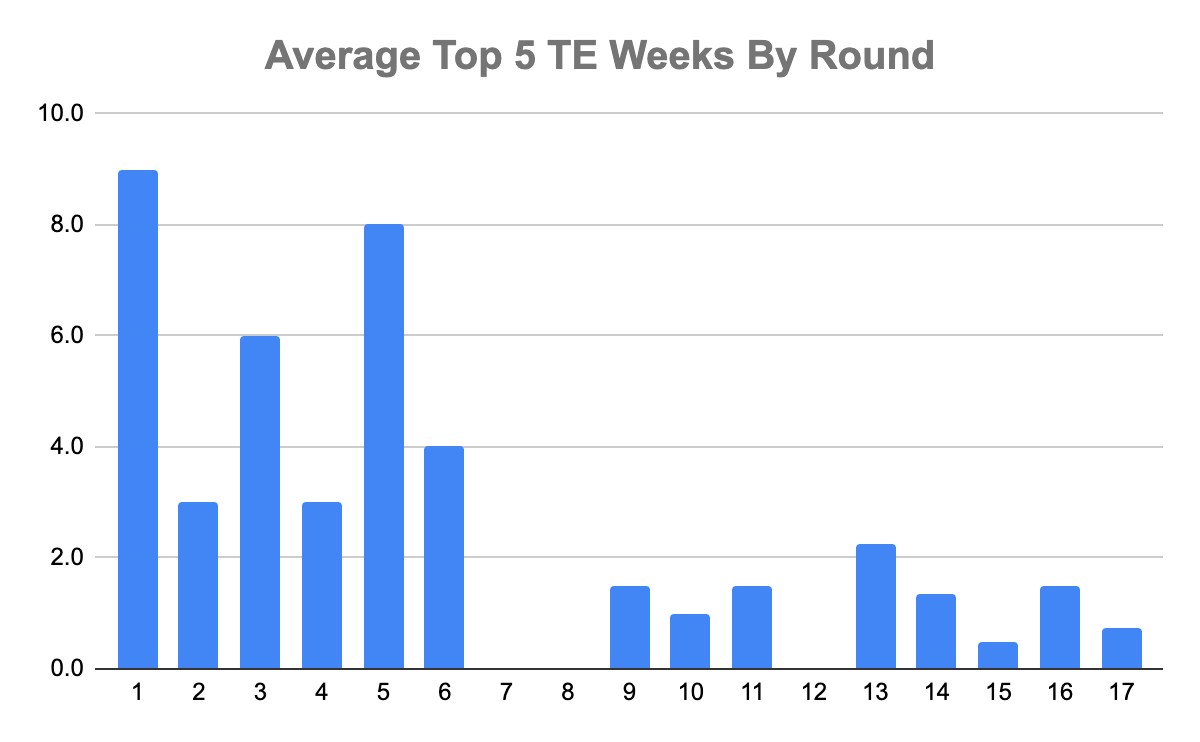 This looks similar to the QB chart – with elite weeks even more concentrated at the beginning of the draft. Travis Kelce (Round 1), George Kittle (Round 3) and Mark Andrews (Round 5) accounted for 26% of top-5 weeks. 37% of elite TE weeks were drafted in the first 6 rounds.

2022 Takeaway: Studs or duds looks like the optimal TE strategy again this season. Either grab 1 of the elites within the first 5 rounds or wait and grab 2 or 3 TEs in the later rounds.

So how would we have drafted last year to accumulate as many elite fantasy weeks as possible? We would have:

2022 will play out differently. ADP is different, and the dispersion of elite weeks at each position will be different. What worked last year won’t necessarily work this year.

But I do think last year’s results lay a nice groundwork for how to attack 2022 Underdog drafts. It’s status quo at QB and TE, where we should be looking to grab an elite early or wait and grab 3 guys late.

The landscape is a bit different at RB and WR. RBs have been pushed down in ADP, creating more opportunity in Rounds 3 and 4 than we saw last year. WR is a bit top-heavier, with Cooper Kupp, Justin Jefferson and Ja’Marr Chase a clear top 3 and arguably another drop off behind Davante Adams, Stefon Diggs and CeeDee Lamb. I like getting 1 of those 6 WRs when possible – and using 2 of the other top 3 picks at RB.