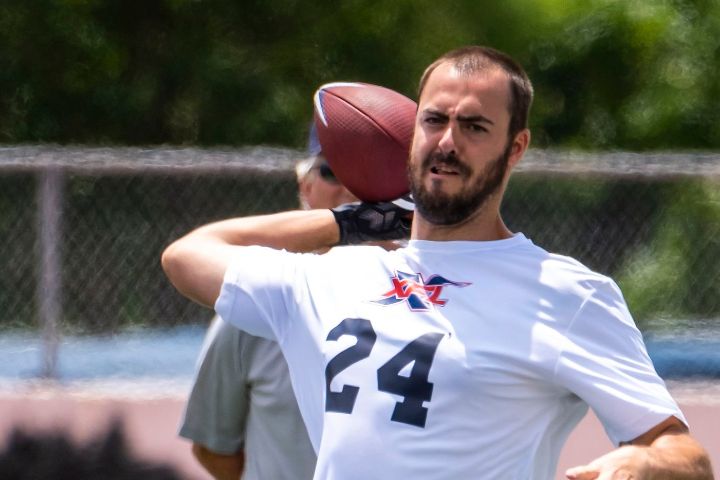 Be honest. Are you (and your rediscovered loved ones) happy that fantasy football season is over … or are you going through withdrawal?

I don’t have the time for fantasy baseball anymore. And I just don’t care about NBA, NHL or any of those other sports trying to play fantasy filler. Fortunately, though, Vince McMahon has come along to help.

The XFL is officially relaunching the Saturday after the Super Bowl (Feb. 8) and will give us 4 games a weekend through Sunday, April 12 (plus playoffs the following 2 weeks).

That means 3 more months of my kids complaining about football taking over the weekend TV. More importantly, though, it also means the opportunity to play 3 more months of fantasy football.

I don’t know yet of any site supporting full-season XFL fantasy. (Please feel free to mention one in the comments below, if you do.) But DraftKings reportedly plans to host XFL contests, and FanDuel might, according to “rumors.”

The XFL isn’t technically new. If you’re around my age or older, you might remember He Hate Me running his way into our hearts back in 2001, right after every game-opening scrum to determine possession in the XFL’s lone season to date. But the lengthy layoff makes this year’s version basically a new product, with coaches bringing a wide variety of experience and many players the public has never heard of or at least doesn’t know well.

I’ve been digging into the rosters and coaching staffs of the new/old league lately, looking to gain an early edge on the fantasy front. And although I’d kinda like to just horde that until after we start setting our lineups, it’s kinda my job to try to give others a fantasy edge.

So I decided to put together these team preview articles to help get to know some of the coaching tendencies and player skills that just might shape XFL fantasy scoring over the next few months.

Before we get to the teams, though, let’s hit on some rule variations that could affect the stats.

1. The play clock is shorter (25 seconds vs. NFL’s 40).
2. The game clock stops (at least temporarily) after every play inside the final 2 minutes of either half.
3. Clock won’t stop for incompletions or out-of-bounds plays outside of 2 minutes remaining.
4. You only need 1 foot inbounds for a reception.
5. Overtime: Each team gets 5 turns to score on a single play from the 5-yard line. Most points after those 5 “rounds” wins (unless scoring eliminates a team in fewer rounds).
6. A team can throw a 2nd forward pass on the same play if the 1st comes behind the line of scrimmage.
7. Kickoff and punt rules delay when kicking-team players can start downfield, thus encouraging returns.
8. Most touchbacks on kicks come out to the 35-yard line instead of the 20.

Those rules figure to impact scoring. We’ll see just what that looks like.

For now, though, let’s dig in to the times. In alphabetical order, we’ll kick things off with the … Dallas Renegades

Dallas HC Bob Stoops is a career-long defensive guy, best known for running Oklahoma’s program from 1999 through 2016. We’ll see what means for the Renegades’ defense. But, frankly, I’m basically ignoring the XFL defenses at least until we get into the real games. We’re talking about a largely unfamiliar talent pool, yet-to-be-seen schemes, altered rules and the general fantasy question of just how much defense actually matters. (Thanks, Josh Hermsmeyer.)

What will matter for the Renegades in fantasy is OC Hal Mumme, who has been running college offenses since Stoops was finishing up his playing days (at Iowa).

From 1982 through 1996, Mumme spent 4 years as UTEP’s OC, 3 years as HC at NAIA-level Iowa Wesleyan and 5 more in charge of Division II Valdosta State.

In 1997, Mumme too over the head job at Kentucky. From that season through 2018, he spent 20 years as HC or OC at 7 different schools across 4 levels of college ball. Throughout that span, Mumme relied on pass-heavy approaches. The only Mumme offense in that time that averaged fewer than 41 pass attempts per game was Jackson State in 2018, and Mumme left that post after just 3 games. His median through those 20 season: 51.3 passes per contest.

Mumme sports just a 142-152-1 record as a college head coach, so his lackluster teams had to contribute to that pass-run split. But a nearly 2-1 lean toward pass plays over that long a span (without even factoring in sacks or dropbacks that turned into QB scrambles) seems notable.

Each XFL team had a QB assigned before a draft that separated position groups. The Renegades got Jones, who spent 4 years starting (and starring) under Stoops at Oklahoma before the Steelers drafted him in Round 4 in 2013. Jones tossed 123 TDs vs. just 52 INTs at a solid 7.6 yards per attempt as a Sooner, and then spent most of the past 6 years backing up Ben Roethlisberger. That gig allowed Jones 169 regular-season NFL attempts to date, and he has managed 63.9% completions, 7.8 yards per attempt, a 4.7% TD rate and a 4.1% INT rate.

Even at 30 (until April 4), Jones should at least be 1 of the better QBs in the XFL. Only 4 other QBs among the 21 kept on “final” 52-man rosters were drafted by the NFL. Jones’ problem is that a knee injury has kept him out through much of the prep period and threatens his Week 1 availability. Jones did recently return to “light" workouts and says the “worst-case scenario” would have him returning for Week 2.

If Jones sits Week 1, then Philip Nelson looks like the starter -- with a potentially nice set of WRs. Whichever QB is starting for Hal Mumme’s offense should find opportunity.

The Renegades went WR with their first 2 picks of the skill-position portion of the draft before taking Artis-Payne in the middle of Round 3. He did basically nothing across 4 years with the Carolina Panthers before they finally dumped him at beginning of last season. But he’s 1 of just 7 NFL-drafted RBs on the XFL’s season-opening rosters.

Artis-Payne is 29, but logged just 118 NFL carries and 10 receptions, so he should sport plenty more tread. He doesn’t drag along the history of lower-body injuries that teammate Lance Dunbar sports. And the 66th-percentile speed score that Artis-Payne posted in his draft year easily beats those of any other player in the Dallas backfield.

CAP caught just 13 passes in his lone starting season at Auburn, but his college tape seemed to flash the ability to take on a larger receiving role. We’ll see if he can find that here.

TommyLee Lewis declined Dallas after it drafted him. But the Renegades chose to trade away Stacy Coley, the 3rd WR they selected. Ferguson’s emergence on the outside might have helped prompt move. I was a little surprised the Seahawks didn’t keep the 6’5, 228-pound Ferguson around after he posted a 7-119-1 line for the 2019 preseason. With 4.45-second speed and a pass-friendly offense, the 23-year-old could be set up to break out.

Badet stands much smaller -- 5’11, 182 pounds -- but runs even faster than Ferguson (4.39-second 40). He didn’t garner selection in the NFL Draft, but Badet did average 16.5 yards per catch over 108 college receptions (3 years at Kentucky; 1 at Oklahoma). The Dallas coaching staff clearly liked the 25-year-old, selecting him in Round 1 of the skill-position draft.

NFL fans might also recognize the name of WR Freddie Martino, who spent 3 years with Tampa Bay and 1 with the Falcons (after going undrafted). Dallas’ lead TE job appears to still be up for grabs between Donald Parham and Sean Price. Parham would be the more exciting because of his frame (6’8, 240) and big college production at Stetson: 180 catches, 2,591 yards and 20 TDs for his career.