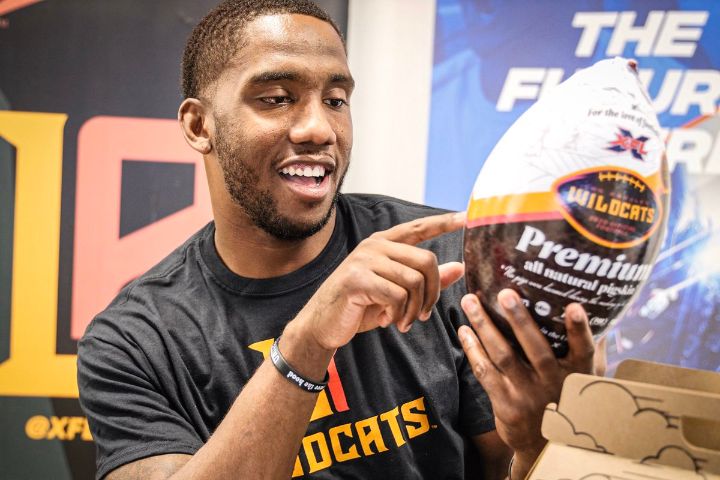 I don’t know about you, but I had a crappy Sunday.

It didn’t have a thing to do with the Super Bowl, or the kid that was getting over a stomach bug. (I was rooting Chiefs, and she got all her puking in Saturday while I was off at the Syracuse-Duke basketball game.)

Nah, the bad part for me was finding out early Sunday that New York is blocking me from playing fantasy XFL on DraftKings. We’ll see if someone fixes that before this 2nd inaugural season finishes.

In the meantime, I guess I’ll just keep trying to get YOU prepared to win some money. And the next step is the 4th entry into our 8-team preview series … the Los Angeles Wildcats.

HC Winston Moss is a defensive guy, so that should make this Norm Chow’s offense.

L.A.’s OC has been running offenses since 1996 -- mostly in college. He spent 4 years as assistant HC/OC at BYU, when he was also QBs coach and WRs coach. Chow went from there to 1 season as OC/QBs coach at N.C. State and then 4 as USC’s offensive coordinator under Pete Carroll. After 3 years as Titans OC, Chow returned to college to spent 3 seasons as UCLA’s coordinator (under Rick Neuheisel), 1 as Utah’s OC and then 4 as HC at Hawaii.

Among those 20 seasons of running offenses, Chow had just 6 teams finish with more pass attempts than rushing attempts. Only his 2005 Titans averaged at least 10 more passes per game than rushes. That came in QB Steve McNair’s final Tennessee season. The next year found QB Vince Young arriving, and the Titans averaging more rushes per game than passes in each of Chow’s remaining 2 years there.

Chow’s 2000 N.C. State squad -- his only year at the school -- found the Wolfpack throwing 9.5 more times per game than it ran, with freshman QB Philip Rivers and top WR Koren Robinson leading the way. Chow’s other 4 most pass-leaning offenses each finished with a gap of less than 8 attempts per game.

In short, Chow’s history says that he likes to run the ball.

As you can see, half of the team’s 10 skill-position draft picks didn’t make it to the regular-season roster. The only TE on the 52-man “final” roster, Barnes, totaled just 29 receptions across 4 years at Alabama State.

Originally a 5th-round pick of the 2008 Buccaneers, spent all or part of 8 seasons in the NFL. He garnered just 8 starts in that span, completing a mere 55.2% of passes at 6.1 yards per attempt, with 8 TDs vs. 14 INTs. But Johnson added 394 rushing yards at 5.9 per attempt. The 4.55-second 40 time he ran back in pre-draft testing rates 97th percentile among NFL QBs. Although Johnson might not be quite that fast 11 years later, there’s a decent chance he remains the top runner among XFL QBs.

At University of San Diego -- where he played under Jim Harbaugh -- Johnson racked up 1,864 rushing yards at 6.1 per attempt (including yards lost to sacks). He also excelled as a passer, averaging 9.1 yards per attempt and delivering 113 TDs vs. just 15 INTs. Johnson’s senior campaign featured 43 scoring throws, 1 INT and 9.9 yards per pass attempt.

That’s a long time ago. But the talent he’ll face in the XFL figures to sit much closer to what he saw in college than what greeted him in the NFL.

Update: Be aware that Johnson is reportedly a game-time decision for Week 1 against the Roughnecks because of an unspecified injury. If Johnson can't go, Chad Kanoff would step in. He completed 64.5% of passes at 7.4 yards per attempt over 3 seasons of starting at Princeton (2015-17). Kanoff tossed just 14 TDs vs. 13 INTs over his 1st 2 campaigns before a big senior year:

We can assume from his 5.08-second 40 time that the 6'4 backup won't come close to Johnson as a rushing threat.

As you saw above, the Wildcats drafted AAF darling Rashad Ross, making him the 1st pick of Round 2. But the traded him for McBride during training camp, a move that seemed to be driven by personality clashes. Whatever the motivation, L.A. still came away with a speedy wideout boasting NFL experience.

McBride went to the Titans in Round 7 of the 2015 draft and also spent time with the Bears, Jets, Jaguars and Washington. Eight of his 10 career catches to date came with the 2017 Bears.

That followed a college career in which McBride caught 196 balls at William & Mary. He tallied 55+ receptions and 800+ yards in each of his final 3 years, while averaging 13.5 yards per catch for his career and totaling 19 TDs. McBride’s 4.41-second 40 time ties him for 3rd-fastest (with Rashad Ross) among 55 XFL-rostered WRs. That speed also led to 28 career rushes and 23.1 yards per kick return in college.

Spruce’s per-catch average of 11.4 yards for his college career matches up with his 4.69-second 40 time and reveals him as more of a possession type than McBride. But Spruce did spend time with the Rams and Chargers after landing in the NFL as an undrafted free agent. More recently, he ranked 2nd in the AAF in receptions and 3rd in targets, beating Rashad Ross in both categories.

Expect Spruce and McBride to lead a WR corps that sports a fair amount of speed but little college production among the rest of the group. (L.A. is the only team in the XFL with 3 wideouts who have timed under 4.5 seconds in the 40-yard dash.)

WR Kermit Whitfield looks next most intriguing at the position for the Wildcats. He caught 107 career passes at Florida State before running a 4.44-second 40 at 5’7 and 185 pounds.

Update: The Wildcats have released their Week 1 depth chart, and apparently I was wrong about McBride.

L.A. lists Spruce, Jordan Smallwood and Adonis Jennings as the top 3 WRs. I already hit on Spruce above. Jennings managed just 17 catches in AAF play last spring, ranking 4th in that category on his own team. He averaged 12.4 yards per catch and didn't score a TD. Jennings averaged 15.9 yards per catch on 89 career receptions at Temple; 17.6 yards per catch over his final 2 years.

Smallwood managed only 18 career receptions at 9.4 per catch over 4 seasons at Oklahoma. He did get brief stints with the 49ers, Lions and Chargers, all inside the 2019 offseason.

This backfield likely isn’t settled, and Chow’s background should lead to meaningful touches for more than 1 member of the group. But I’ll lead with Hood here.

Former Packers and 49ers RB DuJuan Harris might be the most recognizable name among Wildcats RBs. He spent parts of 5 seasons in the NFL, started 4 games over that time and ran a 4.45-second 40 back in 2011. That ties D.C.’s Jhurell Pressley for fastest pre-draft 40 among all 31 RBs on “final” XFL rosters. But Harris also 31, and (officially) 4 inches shorter and 26 pounds lighter than Hood.

At 232 pounds, Hood’s 101.8 speed score from 2017 pre-draft testing rates 70th percentile among NFL backs and ranks 6th-best among XFL RBs. Of the 5 ahead of him in that category, only Pressley didn’t get drafted by the NFL.

He might not lead the Wildcat backfield in receiving, but Hood looks like at least the best bet for carries and shouldn’t be a zero in the passing game. He’s also about 7.5 years younger than Harris.

Martez Carter stands about the same size as Harris but trails the group in speed score. He topped out at 167 carries in his final season at Grambling State but caught 28 and 33 passes in his final 2 seasons. Carter also averaged an impressive 6.6 yards per rush and 13.0 yards per catch for his college career.

It’s also worth noting that Hood is priced way ahead of his backfield mates for XFL opening weekend on DraftKings: