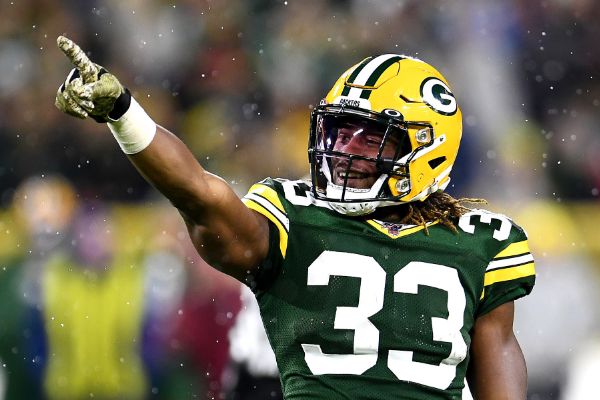 Jones has been an efficient, productive runner over his 2 seasons as the clear backfield leader in Green Bay. The Packers’ financial commitment to him this spring shows they believe he’s a key to the offense, which should keep his volume up. Shedding Jamaal Williams in favor of AJ Dillon ascending to the #2 role brings uncertainty, but Dillon comes with less proof as a receiving option than Williams.

Of course, the greatest unknown remains the Aaron Rodgers situation. Rodgers’ return would obviously be good news for the entire offense. His departure? Well, since the start of 2008, we’ve only seen 18 of 190 regular-season Packers games without Rodgers involved. And his replacement would be a 2nd-year QB who got no work after arriving in Round 1 of last year’s draft. So we really don’t know what the impact would be.

If Rodgers remains, Jones looks good in the 2nd half of Round 1. If Rodgers goes (or just sits), then the risk obviously increases.

The Packers have agreed to a new 4-year deal with RB Aaron Jones. His agent, Drew Rosenhaus, says it's a $48 million pact, including a $13 million signing bonus. (We'll see about further details.) Reports had continued that Green Bay wanted to keep Jones around, and this likely indicates he wouldn't have found bigger money on the open market. Jones figures to remain the lead back. AJ Dillon will continue to find limited work available in his 2nd season. Dillon could see his role grow, though, with Jamaal Williams heading to free agency. We'll see how the whole backfield settles out.

Packers RB Aaron Jones (calf) is active for tonight's game against the 49ers. Everything we've heard over the last few hours suggests he'll be limited in this one. That, of course, could change based on how he's playing and feeling. It's also worth noting that this is a tough matchup vs. a 49ers defense that sits 7th in Football Outsiders' run defense rankings and 3rd in adjusted fantasy points allowed to RBs. The strength of your other options should determine whether you want to roll the dice on Jones tonight. We'd avoid RBs Tyler Ervin and Dexter Williams with Jones active.

NFL Network's Ian Rapoport hears that the Packers are "hopeful" RB Aaron Jones (calf) will be active for tonight's game against the 49ers. A final decision won't be made until warmups, though. And Rapoport adds that Jones "may end up being a limited role." It sounds like the absences of RBs Jamaal Williams and A.J. Dillon might be pushing Green Bay to get Jones back out there. We'll see if he's up when inactives come out around 7 pm ET and if we hear anything about his expected role. As of now, we'd consider Jones a risky Week 9 fantasy play.

Packers RB Aaron Jones (calf) was listed as a limited practice participant all week and is officially questionable for Thursday night's game vs. the 49ers. It's possible Green Bay pushes him back out there with RBs Jamaal Williams and A.J. Dillon out for this one. If Jones sits out, it'll be Tyler Ervin and Dexter Williams in the Packers' backfield. We'll get the inactives around 6 pm ET tomorrow.

NFL Network's Ian Rapoport hears that there's "pessimism" about Packers RB Aaron Jones' availability for Thursday night's game against the 49ers. The team continues to be cautious bringing him back from that calf injury. With RBs Jamaal Williams and A.J. Dillon both out, it looks like Green Bay will be rolling with RBs Dexter Williams and Tyler Ervin, who have combined for 15 NFL carries. ESPN's Rob Demovsky tweeted today that Williams "has given them no reason to trust him" and that the Packers could "use a short pass game w/ Ervin to act as runs."