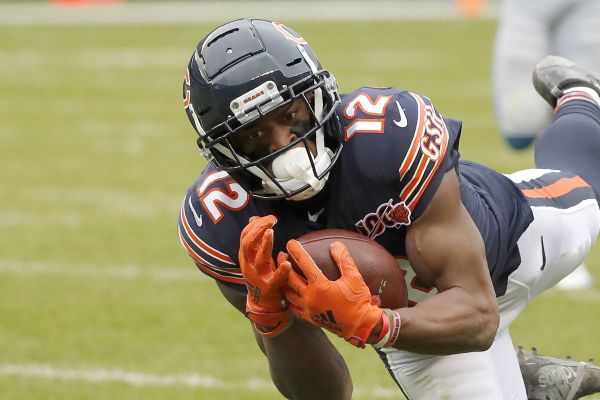 Week 14
On a positive note, Robinson finished second on the team with 6 targets on Sunday Night Football against the Packers. Aside from that, there isn’t much positive to talk about regarding ARob. He had a tough night getting open against a revamped Packers defense. He finished with 2 catches for 14 yards and was a non-factor in the game. It has been a puzzling year for the talented veteran, he has only reached the end zone once all season. We have Robinson ranked as our WR54 this week against the Vikings. The Vikings secondary has been torched by opposing WR groups this season, especially over the last 4 games. They have surrendered 6 receiving TDs and over 890 receiving yards to opposing WRs over that span. The next three games on the Bears schedule to wrap up the fantasy football playoffs include MIN, @SEA, and NYG.
Week 8
The underwhelming season for Robinson continued on Sunday. He caught 3 of his 4 targets for 21 yards. This was the 2nd straight game where he saw 4 targets and produced 21 yards or less.

Going forward, there is little reason to have any optimism. He is seeing little volume with 5 or fewer targets in 3 of the last 4 games. Even worse, he is failing to produce anything of note with the less-than-ideal volume. In fact, Robinson has cleared 50 receiving yards just twice and has only scored 1 TD.

At this point he is closer to a drop than someone you should consider starting. He does carry some name value in more casual leagues, so shopping him especially with the bye weeks might not be the worst idea.
Week 7
This felt like the last stand for Robinson. If he couldn’t deliver vs. Tampa’s bottom 5 WR defense, when would he?

Well, Robinson did not deliver. 4 targets, 2 catches, 16 yards and 0 TDs. Robinson and QB Justin Fields once again didn’t seem to be on the same page. And Robinson’s 4 targets were just 12.5% of the team total.

Robinson ranks 58th among WRs in PPR points and hasn’t finished a single week higher than 46th. At this point, there’s no reason to believe things will get better in Chicago this season. Robinson is droppable in standard-sized fantasy leagues.
Week 6
Robinson showed some life on Sunday, catching 4 of his 7 targets for 53 yards. It was only his 2nd time clearing 50 yards -- but both performances have come in the past 3 weeks. This was also the most targets Robinson has seen since Week 1. This volume is even more impressive when you consider this game was much closer than the final score would indicate.

Going forward, Robinson might have a real breakout opportunity this week against Tampa Bay. They are weak against the pass and HC Matt Nagy may have no choice but to let his rookie QB rip it.

Thus far, things have been ugly for where the preseason expectations had him pegged. If the next week or so doesn’t result in a step forward, this might just be the player we are going to get all season.
Week 5
Robinson’s underwhelming season continued on Sunday, catching 4 of his 5 targets for 32 yards. The volume has really diminished after seeing 11 targets in Week 1 against the Rams. He has only produced more than 35 receiving yards once this season.

Going forward Robinson is someone to sit on your bench if possible. With Justin Fields only ahead of Jacoby Brissett in terms of yards per attempt and Matt Nagy being a horrendous play caller, there is little reason for optimism. Chicago has run the ball 25 or more times in 4 of 5 games, including 2 with a staggering 34 rush attempts. Until something dramatic happens, the Bears passing game is an avoid.
Week 4
Robinson caught 3 of 3 targets for 63 yards in the Bears' Week 4 win over the Lions.
Robinson was efficient, catching all 3 of the balls thrown in his direction, including gains of 27 and 28 yards in the 3rd quarter.
Positive game script hurt Robinson in this one as the Bears built an early 14-0 lead and went conservative with their rookie QB making his 2nd career start.
Robinson should have some upside in Week 5’s matchup against the Raiders.
Week 3
Robinson led all Bears with 6 targets in Sunday’s loss to the Browns, and that didn’t even include the 48-yard PI he drew against S John Johnson -- or the holding call he drew on CB Denzel Ward to help another drive.

Alas, Robinson caught just 2 of his 6 official targets for 27 yards. (Though he and Fields made another nice sideline connection that went incomplete because Robinson landed out of bounds.)

We can’t help but be worried about this offense on whole and the situation for the rookie QB, which necessarily adds risk to Robinson. You’ll find him down the WR rankings for this week and the rest of the season. A Week 4 matchup with Detroit does offer rebound potential vs. the much more talented Browns defense, though.
Week 2
Robinson was able to salvage his fantasy day with a TD despite catching just 2 of his 4 targets for 24 yards. From a yardage total, he wasn’t far off from the 35 yards he produced in Week 1 despite seeing 11 targets.

The good news for Robinson going forward is that Justin Fields should be under center. "Should" being the key word as there is no telling what Matt Nagy will do. Fields would open up so much for an offense that refuses to throw down field despite having Robinson, Darnell Mooney and Marquise Goodwin.

Robinson saw 3 of his 4 targets from Fields, including 2 attempts into the end zone. If Robinson can see the volume from Week 1 combined with a higher air yards he should be the fantasy monster many pegged him for coming into the season.

Week 1
It was a tough night for Robinson and the Bears receiving corps in this opening game against a very talented Rams defense and Jalen Ramsey. Robinson did lead the team with 11 targets, but Andy Dalton wasn’t able to push the ball downfield at all in this game and Robinson was held down all night. Robinson finished the night with 6 catches for 35 yards. It was a disappointing night for the veteran receiver, but these are few and far between. On a positive note, Robinson was in for 91% of the snaps.

This guy is too talented to be held below 40 receiving yards again. Robinson could be in for a big performance this week against a Bengals defense that just gave up over 350 receiving yards in Week 1. We have him ranked at WR12 this week against Cincinnati. We believe Robinson is going to bounce back and have another huge year, especially once Justin Fields gets into the starting job for the Bears. We have him ranked at WR9 the rest of the way.

You probably already know that Robinson has been really good so far in the NFL. It gets even more impressive when you consider how poor his QB play has been. Justin Fields has the chance to immediately raise the ceiling from that end, potentially upgrading both the downfield production and overall accuracy. Even if Chicago opens the year with Andy Dalton, the veteran could stabilize the position vs. the crap carousel that was Foles-Trubisky.

Robinson belongs in WR1 territory in drafts and might even be slightly undervalued at his WR13 ADP in FFPC best-ball drafting right now.

Bears WR Allen Robinson has been activated from the COVID list. He figures to siphon a few targets from WR Darnell Mooney and TE Cole Kmet this weekend, but A-Rob isn't a fantasy option vs. the Giants.

Bears WR Allen Robinson has been placed on the COVID list. He'll likely miss Monday night's game vs. the Vikings. Robinson, of course, has been a major disappointment this season and shouldn't have been in your Week 15 fantasy plans. His absence is a slight upgrade for WR Darnell Mooney and TE Cole Kmet.

Bears WR Allen Robinson (hamstring) isn’t listed on the final Week 14 injury report. He practiced all week, including a full workout on Friday, and will return for Sunday night’s game against the Packers. Robinson was having a disappointing season before this hamstring injury and can’t be trusted in fantasy lineups in his first game back.

Robinson finally back at practice

Bears WR Allen Robinson (hamstring) was limited in Wednesday's practice. It's his first official workout since Chicago returned from the Week 10 bye. We'll see if Robinson is ready for Sunday night's game vs. the Packers, but he wouldn't be a recommended fantasy starter.

Bears WR Allen Robinson (hamstring) is inactive for today’s game vs. the Cardinals. With WR Marquise Goodwin (foot) also out, Chicago is down to WRs Damiere Byrd, Jakeem Grant and Isaiah Coulter behind Darnell Mooney.