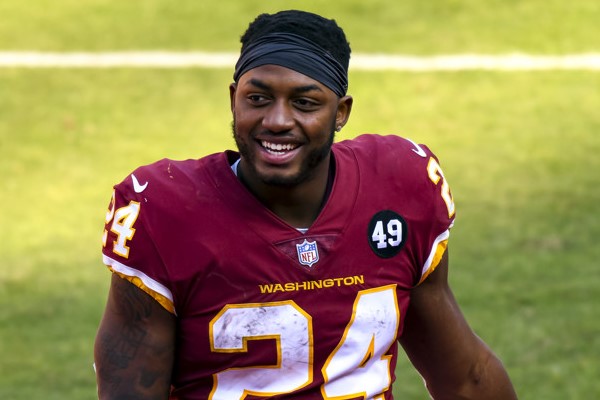 Washington is saying with both words and actions that it wants to limit Gibson’s workload more than it did the past 2 years. J.D. McKissic returns to keep the passing-game lead, while rookie Brian Robinson adds a thumping presence between the tackles. Gibson looks likely to lose both targets and carries vs. last year’s numbers, and he could lose further touches near the goal line. Fantasy drafters have been apprehensive all offseason, allowing Gibson to slip into late Round 5 and even Round 6 since the Robinson addition and the Williams-Stewart comparisons. Gibson doesn’t carry a ton of risk in Round 6, but there’s potential for this to be a frustrating fantasy situation all year. That’s less of a concern for best-ball drafting but should make you wary of counting on Gibson in a lineup-setting format.

Commanders RB Brian Robinson delivered his 1st career 100-yard game in Sunday's win over the Falcons, rushing for 105 on 18 carries. He added 2 catches for 20 yards, including a 14-yard TD. Robinson reclaimed the rushing lead from Antonio Gibson after trailing his teammate there in Week 11. Robinson still ran half has many pass routes as Gibson, according to Pro Football Focus, and beat him by just 4 total snaps. We'd credit the production -- at least in large part -- to the matchup. Sunday marked the 1st time this season that Robinson averaged more than 3.8 yards per carry. And his 2nd-best mark in that category came last week against Houston. Robinson's 3rd straight game of 15+ carries does at least make him a potential volume play in Week 13 against the Giants. We'll see how he fares there before a Week 15 rematch with the Giants (after Washington's bye). Gibson totaled just 9 carries for 32 yards and 3 catches for 22 against Atlanta.

Commanders RB Antonio Gibson played twice as many snaps as Brian Robinson Jr. (46-23) in Sunday's win over the Texans. He carried 18 times for 72 yards (4.0 per rush) and caught all 3 of his targets for 31 more. Robinson carried 15 times for 57 yards (3.8) and didn't see a target. The team's only rushing TD went to WR Curtis Samuel, who carried twice for 18 yards for the game. Week 12 holds another high-upside matchup with the Falcons.

Commanders RB J.D. McKissic (neck) has been placed on IR and will miss the rest of the season, according to NFL Network's Ian Rapoport. McKissic's injury requires "a few months of rehab," per Rapoport. Brian Robinson and Antonio Gibson will continue to handle backfield duties for Washington.

McKissic out for Week 11

Commanders RB J.D. McKissic (neck) is out for Sunday’s game vs. the Texans. That again leaves the backfield to Brian Robinson and Antonio Gibson against the #32 RB defense.

Commanders RB J.D. McKissic (neck) remained sidelined on Wednesday. We haven't heard a timeline for his return. Look for Brian Robinson and Antonio Gibson to again handle backfield work in this weekend's plus matchup vs. the Texans.

Gibson racked up 1,331 total yards in his 2nd NFL season while playing through a stress fracture in his shin. It hasn't been an encouraging offseason, though, with Washington re-signing J.D. McKissic and drafting Brian Robinson.