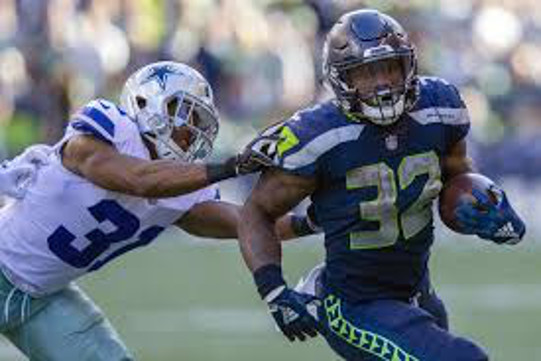 Seahawks RB Chris Carson is retiring from the NFL, per insider Ian Rapoport. According to Rapoport, Seattle will officially release him with a failed physical designation. It’s not a surprise, as Carson’s been sidelined with a neck injury since Week 4 of last season. His career ends with 769 carries for 3,502 yards and 24 TDs. Seattle moves forward with a 1-2 punch of Rashaad Penny and Kenneth Walker.

Carson: "No timeline for me"

Seahawks RB Chris Carson admits that he has "no timeline" for return from his November neck surgery. “Not trying to rush it, I’m just trying to take it one day at a time,” Carson said. “Just keep rehabbing, keep getting better. Keep building strength and then go from there." The Seahawks re-signed RB Rashaad Penny and drafted RB Kenneth Walker this offseason, so they're not banking on having Carson available this season. He's nothing more than a late-round flier in early fantasy drafts.

The NFL announced changes to the 2022 IR rules, the most notable being that designated-to-return players must miss at least 4 games. It was a minimum of 3 games last season. Also noteworthy: A player can now be designated-to-return twice per season, rather than just once. These changes will be worth keeping in mind as you make roster moves during this coming fantasy football season.

Seahawks HC Pete Carroll plans on deploying a committee backfield this season. "We like playing multiple guys, and we don’t have any problem with that at all," Carroll said. "I’ve said it to you a million times. I’m fine going with who is hot. But also, we have to find a way to keep our guys healthy. That’s why the rotation is so important, so we don’t overwork them, particularly early in the year, so we can keep the good momentum building." Seattle spent the 41st overall pick of this year's draft on RB Kenneth Walker. But, prior to that, they gave RB Rashaad Penny a 1-year, $5.75 million contract with a little more than $5 million guaranteed. Penny, of course, closed 2021 with 671 rushing yards over the final 5 games. Seattle also still has RBs Chris Carson, DeeJay Dallas and Travis Homer on the roster. We'll see how the backfield shakes out this summer.

Chris Carson, RB SEA There is no dynasty data for this player.