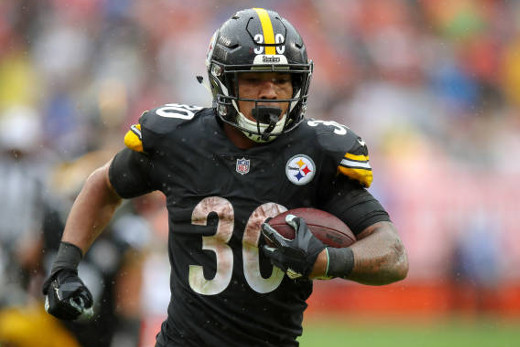 NFL teams are getting smarter. Starters played less this preseason than any other year we can remember. Some teams — the Rams and Bears, for example — didn’t play many starters at all.

So we need to be even more careful with preseason analysis than usual. But there were certainly fantasy takeaways to be had.

We noted usage and performance nuggets throughout the first 3 weeks of the preseason here:

Now we’ve got 15 winners and 5 losers from the action.

With a sneaky-good group of pass-catchers, Darnold looks set to a big step forward in Year 2.

We’ll see how long the Giants stubbornly stick with their veteran. But Jones looks capable of sparking this offense — and maybe even being a fantasy spot starter.

There was talk this offseason that Pittsburgh might go with more of a committee backfield this year. Preseason usage suggests that won’t be the case.

In QB Ben Roethlisberger’s only appearance, Conner played 15 of 19 snaps (78.9%) with the starters (Jaylen Samuels played 3; Trey Edmunds 1). And he looked awesome, ripping off 41 yards on 5 carries and catching 2 balls for 15 more yards. Conner ranks 20th in Pro Football Focus’ Elusive Rating among 100 RBs with 10+ carries through the first 3 weeks of the preseason.

Seemingly set to play a workhorse role in a strong offense, Conner is locked in as a RB1 and worth a pick in the back half of Round 1.

If you needed confirmation that Fournette will be a feature back this year, we got it in the 3rd preseason game. He played 17 of QB Nick Foles’ 18 snaps in that one, carrying 7 times and being targeted on 3 of Foles’ 10 pass attempts.

Durability remains a red flag here. But a healthy Fournette will be 1 of the best volume bets in the league this season.

He ran clearly ahead of Rashaad Penny this preseason and just looked like the better player. Carson averaged 6.0 yards on his 8 attempts, while Penny mustered just 1.8 yards per carry.

Reportedly in for a bigger role in the passing game, Carson should be a good bet for 15+ touches per week. We love him as a RB2.

Before Andrew Luck’s shocking retirement, Mack’s stock was on the rise.

Our biggest concern with his 2019 fantasy value had been his pass-catching role. But in the Colts’ 2nd preseason game, Mack was on the field for 16 of QB Jacoby Brissett’s 18 snaps, including all 3 third downs and 1 fourth down.

Mack’s ceiling took a significant hit with the Luck news. But his weekly floor will get a nice boost if he’s going to play something close to a 3-down role this season.

Guice played 18 of 30 snaps (60%) in the 1st half of Washington’s 3rd preseason game. He ceded 3rd-down and hurry-up snaps to RB Chris Thompson but dominated carries, finishing with 44 yards on 11 attempts. That included this nasty stiff arm. Guice also caught his lone target for 4 yards.

RB Adrian Peterson didn't play in that game, so we still don’t know how the early-down work will be divvied to open the season. But Guice looks healthy. And a healthy Guice is the most talented guy in this backfield.

Thompson hasn’t looked like a 6th-round rookie from Utah State this preseason. He’s looked like a guy ready to make an immediate impact.

In 3 outings, he’s carried 12 times for 60 yards — a nice 5.0 per-carry average. Thompson has also hauled in 3 balls for 38 yards, highlighted by this 29-yard catch-and-run TD. Among 100 RBs with 10+ carries this preseason, Thompson ranks 2nd in Pro Football Focus’ Elusive Rating.

His strong play has vaulted him to #2 on Kansas City’s depth chart and seemingly earned him a real Week 1 role. In the Chiefs’ 3rd preseason game, Thompson was on the field for 5 of QB Patrick Mahomes’ 14 snaps (35.7%).

QB Jimmy Garoppolo has played 47 snaps this preseason. RB Tevin Coleman has been on the field for 27 of those. But Breida isn’t too far behind at 18 — a 39.0% snap share.

And he deserves more. Breida has averaged 6.0 yards per carry this preseason vs. Coleman’s 3.3.

Don’t be surprised if this turns into something close to a 50/50 split by October.

There’s no doubt who the #2 RB in Dallas is. Pollard has been on the field for all 22 of QB Dak Prescott’s snaps over the last 2 preseason games. And he’s looked good.

The rookie carried 5 times for 42 yards and a score and caught 1 ball for 9 yards on his lone drive in Week 2. Then he totaled 36 yards on 8 touches this past week. Pollard ranks 10th in Pro Football Focus’ Elusive Rating among 100 RBs with 10+ carries this preseason.

We still don’t think Pollard sees enough work to be a fantasy factor behind Ezekiel Elliott. But if Zeke’s holdout extends into the regular season, Pollard will be an easy fantasy starter.

This guy has seemingly worked his way into a Week 1 role as Tampa’s passing-down back. In the Bucs’ 3rd preseason game, Ogunbowale played 10 of the 34 first-half snaps (29.4%). That was the same number as Peyton Barber and just 1 fewer than Ronald Jones.

Most of Ogunbowale’s snaps came in hurry-up mode at the end of the half. He finished with just 1 catch on 2 targets for 12 yards.

Ogunbowale still isn’t draftable outside of the deepest of PPR leagues. But he’s at least worth monitoring early this season.

We heard all August that Sanders looked excellent in his return from last December’s torn Achilles. Then we saw it with our own eyes in the 2nd week of the preseason.

Sanders caught a pass on Denver's 1st offensive snap in that one. He later had this 19-yard run on an end-around. And he had a 45-yard catch deep downfield negated by a holding penalty.

At least close to his pre-injury form, Sanders is a nice value at his 8th-round ADP. He was sitting 15th among WRs in PPR points before going down last year.

QB Nick Foles attempted 10 passes this preseason — all in the 3rd week. Seven of them went in Westbrook’s direction.

So we’re now projecting Westbrook for a 70% target share this year.

But it does look like there’s some chemistry between these 2. And Westbrook is the most talented WR in Jacksonville anyway. He’s a fine WR3 target at his 7th-round price tag.

Don’t expect quite as big a slice of the pie come regular-season action. But it’s within the realm of possibility that Beasley leads the Bills in targets. He should be on your radar late in PPR drafts.

Howard didn’t make any big plays this preseason. (A good thing — it keeps his ADP from inflating.) But his usage was encouraging.

Howard was on the field for 55 of QB Jameis Winston’s 58 snaps — a 94.8% snap rate. That’s huge when you consider that he hasn't reached even an 80% snap rate in any of his 24 career regular-season games.

Howard is set to play the biggest role of his young career and is a prime 2019 breakout candidate.

Strange is the best word for Johnson’s usage this preseason.

After being held out of the opener, he operated as the lead early-down back in Week 2. But he was pulled on 3rd down on all 3 series he played — twice for C.J. Anderson and once for Ty Johnson.

In Week 3, Johnson played all 5 snaps on the opening possession, including a 3rd and 6. But then C.J. Anderson got the 2nd possession to himself. Johnson briefly re-entered on the 3rd possession before Anderson and Ty Johnson got the rest of the snaps with QB Matt Stafford.

It’s tough to know exactly what to make of it. But don’t be surprised if Anderson and maybe Ty Johnson play more than Kerryon owners would like this season.

We’re still projecting Kerryon to see enough work to flirt with RB1 production and like him as a 3rd-round target.

QB Joe Flacco played 30 snaps this preseason. Lindsay was on the field for exactly half of them. His snap rate was closer to 60% during his big stretch from Week 7 to 16 last year.

We’re expecting the carry distribution between Lindsay and Freeman to be much closer this year than last. And RBs Theo Riddick and Devontae Booker are threats to steal some pass-catching works.

182 WRs have seen 5+ targets this preseason. Among them, Pettis ranks 126th in Pro Football Focus’ receiving grades and 119th in yards per route run.

HC Kyle Shanahan played Pettis deep into the 3rd preseason game and said afterward that Pettis still needs to “earn a role on the team.”

It’s worth noting that he played the majority of the snaps with QB Jimmy Garoppolo in the 2nd and 3rd exhibitions, so Pettis figures to open the season with a significant role. But he hasn’t played like a guy ready to break out this month.

Because Washington has operated as JuJu Smith-Schuster’s backup. QB Ben Roethlisberger played 20 snaps in Pittsburgh’s 3rd preseason game, and Washington was on the field for just 2 of them — fewer than Donte Moncrief (19), Smith-Schuster (18), Ryan Switzer (13) and Eli Rogers (6).

Washington’s preseason performance should earn him more playing time. But until we see it, he’s not a fantasy option.

Andrews impressed onlookers throughout training camp. We don’t doubt his ability. Our concerns have always been playing time and volume. This preseason did nothing to quell those concerns.

QB Lamar Jackson played 36 exhibition snaps. Andrews was on the field for just 11 of those. That 30.6% snap rate is lower than his 34.8% mark last year.

And none of Jackson’s 16 pass attempts went to Andrews this preseason.

These are all small samples, of course. But it continues to look like Andrews will be a part-time player on a run-heavy offense. That’s not a recipe for bankable fantasy production.