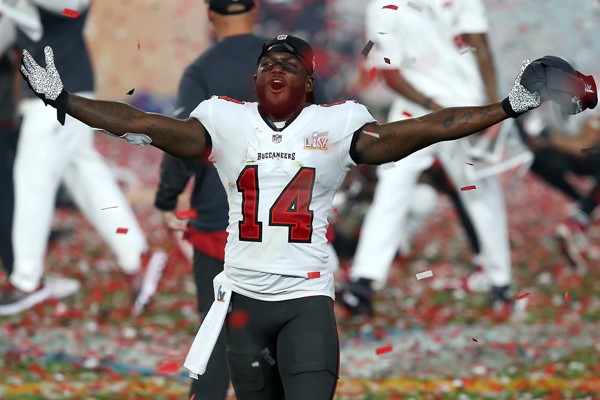 Week 14
Godwin caught 10 of 15 targets for 105 yards in the Bucs' Week 14 overtime win over the Bills.
Godwin has been a total stud with Antonio Brown not in the lineup as he now has 25 catches for 248 yards in the last 2 games alone.
Brady targets Godwin more than anyone else as he is constantly used on screens and across the middle of the field.
Godwin is an elite WR1 and actually has a good matchup in the slot against the Saints in Week 15.
Week 13
Godwin had an especially busy day against the Falcons -- by design.

Tampa opened the game attacking Atlanta’s pass defense, calling 0 runs among the 13 plays on the initial scoring drive. Godwin already had 6 targets and 5 receptions by the end of that possession. He had collected a 9-82 receiving line on 10 targets by halftime. And Godwin finished with 15 receptions for 143 yards among 17 targets.

Godwin won’t generally draw the 33.3% target share he enjoyed in Week 13, but he has earned 24.5% target share since Antonio Brown went down. Catching passes from the QB leading the league in attempts and completions certainly can’t hurt.
Week 12
Although the Colts have had struggles against WRs this season, they clamped down on the Bucs WRs for all 4 quarters. Even facing a zone defense that usually results in a big game for Godwin, Tom Brady never got into a rhythm with Godwin, and he instead threw the majority of his passes to Rob Gronkowski and Leonard Fournette. Although Godwin was 3rd on the team with 5 targets, they were all on short passes, and he was unable to get much going after the catch. His only rushing attempt went for 3 yards, but it converted a huge 1st down that helped the Bucs win the game.

Although he’s had 3 big yardage games this season, he’s been held to fewer than 75 yards in each of his other games, so his ceiling is not consistently high. It also will likely take targets away from him when Antonio Brown (ankle) returns to action. Over the last 3 games, he’s only averaging 6 targets, and for a volume-based fantasy option, that’s far from optimal. He does have a couple tough matchups against the Bills and Panthers in Weeks 14 and 16, but he has 2 easy matchups against the Saints and Jets in Weeks 15 and 17.
Week 11
Godwin took care of business by hauling in the opening drive TD, finishing with 6 receptions for 65 yards. QB Tom Brady found him a bunch of times early on. Godwin’s TD came on a relatively harmless looking screen that the Giants D overcommitted on. Godwin scampered untouched into the end zone for his 5th TD this season.
Godwin has a score in 3 of his last 4 games as the Buccaneers offense is coming into a dangerous form. WR Mike Evans is already doing his thing, and with Godwin on the rise, Tampa could be on their way to defending their crown. Next up is a plus matchup against a Colts secondary that is last in the league in stopping opposing WRs from scoring. Godwin would be an excellent option for DFS lineups this week.
Week 8
Godwin caught 8 of his 12 targets for 140 yards and a TD. This was his second straight game with 8 catches, 100+ yards and a score. This production has come with Antonio Brown out. Godwin has seen a 30.2% target share over that span.

Going forward, the week to week potential for Godwin is clearly higher with Antonio Brown out of the picture. His back to back weeks seeing double-digit targets are as many as he had seen through the first 6 weeks of the season. The last two weeks were also the first time he had produced 100 or more receiving yards since Week 1.

When Brown comes back, be ready to temper expectations for Godwin. But in the meantime he should absolutely be in the WR1 conversation.
Week 7
Tampa’s target tree was condensed in Week 7 with WR Antonio Brown and TE Rob Gronkowski out. That left Godwin and WR Mike Evans to hog QB Tom Brady’s passes.

It was a welcomed big game from a guy who’d been more of a floor play over the previous 4 weeks. Godwin is up to 11th among WRs in targets now, though. And the ceiling is always there in this high-flying Bucs offense.

Brown and Gronk’s returns will cut into Godwin’s targets a bit. But he remains an easy must-start the rest of the way.
Week 5
Godwin’s 11 targets led the Bucs in Sunday’s easy win over Miami. Tom Brady threw 5 TDs, so through that lens, Godwin’s 7-70 line was a bit disappointing. He was fed 3 screens — plus a jet sweep pass — so the Bucs made it a point to get him involved. Godwin also drew an end zone target and had another (in great coverage) come just shy of the goal line. With zero TDs over his past 3 games, Godwin’s TD luck should rebound shortly .Tom Brady’s playing some of the best ball of his career, and it’s quite possible Rob Gronkowski misses another week or 2. Next up is a favorable Thursday night game at Philly.
Week 4
It was a rough outing on SNF for Chris Godwin. He didn’t have many opportunities throughout the game, finished tied for fourth on the team in targets. The team struggled to maintain any flow in the passing game throughout the night due to torrential rain and a great defensive gameplan by the Patriots. Production was down across the board in the passing game and Godwin’s numbers were no exception. He finished the night with 3 catches (on 5 targets) for 55 yards. The game against New England produced Godwin’s lowest output in catches and yardage of the season. However, Godwin and Brady’s connection is too solid to have back-to-back duds. We have him ranked at WR12 this week against the Dolphins talented secondary. The Dolphins have held opposing WR groups to less than 150 receiving yards in 3 out of 4 games so far this season. The next three games on the schedule for Godwin and the Bucs are MIA, @PHI, CHI. We expect Godwin to be a fringe WR1 from here on out.
Week 3
Godwin took a backseat to Mike Evans in Week 3, securing 6-74. Godwin saved his fantasy day in the 4th quarter, catching 3 balls for 45 yards with the Bucs down multiple scores. The good news for Godwin owners is that this production was solid as he faced a lot of Jalen Ramsey. Ramsey is now the primary slot CB for LA, which makes Godwin’s performance even more impressive last week. Godwin still paced the team in routes. And with Brady playing at a high level, he has a big ceiling rest of season.
This week, Godwin could be in line for a big performance as the Bucs take on the Patriots. The Patriots have allowed roughly 50% of their WR production on the inside (league average is 38%), which makes Godwin a must start in Week 4.
Week 2
Godwin caught 4 of 5 targets for 62 yards and 1 TD in the Bucs' Week 2 win over the Falcons.
Godwin has scored a TD in both games thus far this season as Tom Brady has thrown for a whopping 9 TDs through 2 games.
Godwin had a solid game as he also drew 2 defensive pass interference penalties in the end zone, setting up TDs for his teammates Mike Evans and Rob Gronkowski.
Godwin is a borderline top 15 option at WR every week and will benefit in a big way if Mike Evans or Antonio Brown were to miss any time due to injury.
Week 1
Godwin made 9 catches for 105 yards, 9th in the NFL during Week 1. His 5-yard TD opened the scoring.

There are plenty of passes available to catch in Tom Brady’s offense. In each of the last 3 seasons, Godwin has scored at least 7 TDs and gained at least 840 receiving yards. He belongs on fantasy rosters but check on his availability for Week 2. On Tuesday, he was added to the Bucs’ injury report as a limited participant because of a quadriceps injury.

Injuries put a cap on Godwin’s 2020 upside. He missed 4 games after playing 16, 16 and 14 over his first 3 seasons. His quality of play suffered as a result, with Godwin posting career-worst marks in YPC, drop rate and Pro Football Focus receiving grade.

The return of Antonio Brown isn’t ideal, but the 25-year-old Godwin still profiles as a worthy WR2 on the pass-happy Bucs.

The MRI on Bucs WR Chris Godwin's right knee revealed a torn ACL, according to multiple reports. The initial belief was that Godwin had just a sprained MCL and would be back for the playoffs. Now he's out for the rest of the regular season and the postseason. It's especially bad timing for Godwin, who played this season on the franchise tag and is set to hit free agency in March. We'll see where he ends up signing and how his rehab progresses. He's not a lock to be ready for Week 1.

Bucs WR Chris Godwin is expected to miss the rest of the regular season with an MCL sprain suffered in Sunday night's loss to the Saints, according to NFL Network's Ian Rapoport. Tampa expects to get Godwin back for the playoffs. We'll see whether WR Mike Evans (hamstring) is able to play vs. the Panthers this weekend, but WR Antonio Brown's return comes at a perfect time.

Godwin believed to have sprained MCL

The Bucs believe WR Chris Godwin is dealing with a sprained MCL, according to NFL Network's Ian Rapoport. Godwin is scheduled for additional testing on Monday. "He’ll miss time, with an MRI to determine when he’s back," Rapoport adds. It sounds like we'll get a more concrete timeline for Godwin's return tomorrow, but fantasy owners should plan on being without him at least for Week 16.

Bucs WR Chris Godwin hurt his right knee in the 1st half of Sunday's game vs. the Saints. This looked bad when it happened, but Godwin was able to walk off the field under his own power and never went to the locker room. He's officially questionable to return. Stay tuned for an update.

Update: Godwin has been ruled out for the game.

Bucs WR Chris Godwin (foot) is active for today’s game vs. Washington. He only got in a limited practice on Friday, but the news on Godwin has been positive for the past 24 hours. He still comes with elevated risk in Week 10 fantasy lineups. But there’s also big upside here vs. the league’s worst WR defense.