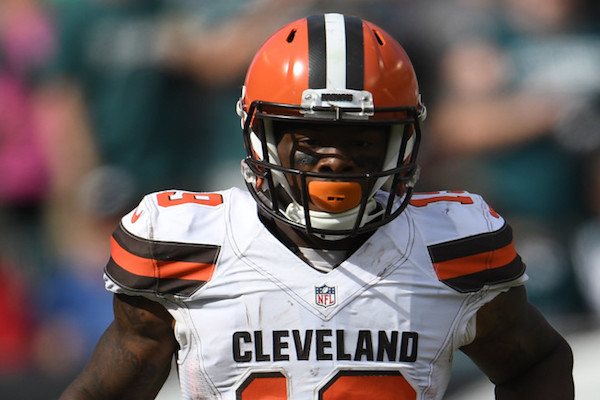 Giants WR Corey Coleman will miss the entire 2019 season after tearing his ACL in Thursday's practice. The former 1st-rounder was the favorite for #3 duties but will now hit free agency in 2020 coming off a serious injury. Rookie Darius Slayton, Cody Latimer, Bennie Fowler and Russell Shepard will now duke it out for that #3 WR job. None is worth a pick in fantasy drafts.

The Giants have activated WR Corey Coleman from their practice squad. The 2016 first-rounder has bounced around to 4 different teams already this season and has yet to make an appearance. We'll see if he gets on the field for the rebuilding/tanking Giants. There's opportunity behind Odell Beckham and Sterling Shepard.

The Patriots have signed WR Corey Coleman to a 1-year deal. It's an intriguing landing spot considering New England's shallow WR corps and the presence of one Tom Brady. But Coleman has already flamed out with 2 teams this offseason, including a Bills squad with the worst WR corps in the league. We'll keep an eye on him, but Coleman isn't worth a roster spot in redraft leagues right now.

The Bills will release WR Corey Coleman, according to NFL Network's Ian Rapoport. The move comes on cutdown day, where every team must pare its roster to 53 players. But this comes as a surprise given that Buffalo gave Cleveland a draft pick for Coleman -- and, of course, the continued fall for the 2016 first-round pick. The Bills will enter 2018 with 1 of the league's worst WR groups. Coleman figures to find a 3rd team quickly, as he heads into his age-24 season. He remains worth a dynasty stash but will obviously need to work his way back onto the redraft radar in fantasy football.

Coleman not a lock to make Bills roster

Bills insider Sal Capaccio says the team's top 5 WRs are set -- and Corey Coleman isn't 1 of them. That would put him in danger of not making the final roster, as the team is also reportedly enamored with rookie Ray-Ray McCloud as a potential special-teams contributor and reserve WR. Keeping guys like Rod Streater and Andre Holmes over Coleman would seem crazy, but HC Sean McDermott will make the former Brown earn his spot. Coleman is no more than a late-round flier in best-ball leagues at this point. Capaccio says Kelvin Benjamin, Zay Jones and Jeremy Kerley are the Bills' top 3 WRs.