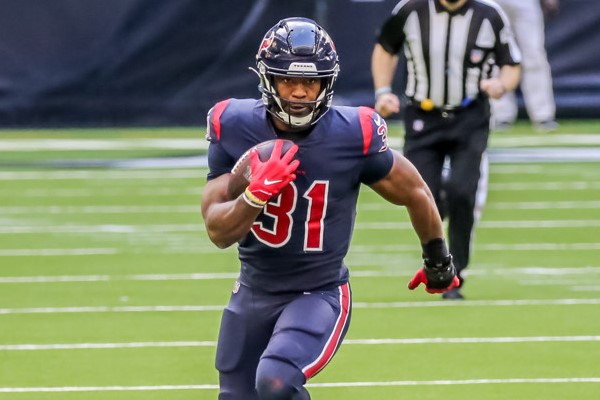 Week 7
While the numbers are far from eye popping, David Johnson was productive on Sunday. He gained 25 yards on his 7 carries. More importantly he caught 5 of his 6 targets for 27 yards. This was the 2nd time in 3 games where he saw 6 targets. In fact he has 4 or more targets in 3 of the last 4 games. While it's nothing to get too excited about, David Johnson seemingly has life in PPR formats. The Texans offense is in major need of playmakers and if he can see 4 to 6 targets and produce something on the ground he can be a fine bye week or injury fill in. If he finds the end zone its even better.
Week 2
Johnson has seen his role reduced in 2021 as he is strictly a passing down back this season. Through two weeks Johnson has 14 total touches: 9 on the ground and 5 receptions. The issue for Johnson is the Texans employ a 3-man committee backfield, which even limits his pass game role. Over the first two games Johnson is 6th on the team in routes, only running a route on 28 of 68 (41%) Texans drop-backs. This didn’t change much in week 2 as Johnson ran a route on less than 50% of the team’s drop-backs. This makes Johnson a drop candidate heading into week 3.

His situation looks much shakier heading into 2021, though. He’s playing under new HC David Culley and will face added competition from arrivals Phillip Lindsay and Mark Ingram. Plus, Houston’s offense figures to struggle without QB Deshaun Watson for part or all of the season.

Johnson could still provide RB3 or flex value if he remains the backfield’s lead ball-carrier and pass-catcher. But if this turns into a 3-man committee, you’ll want to stay away.

Texans RB David Johnson has been activated from the COVID list. He figures to play vs. the Titans on Sunday but should only steal a handful of touches from RB Rex Burkhead.

Johnson out for Week 17

Texans RB David Johnson was not activated from the COVID list and will miss today’s game vs. the 49ers. Rex Burkhead should remain Houston’s clear lead back, with Royce Freeman the #2.

The Texans on Monday placed RB David Johnson on the COVID list. That's probably good news for fantasy, as Johnson was already inactive with a quad injury Sunday against the Chargers. That helped pave the way for Rex Burkhead's blowup. Burkhead should be in line for another feature role next Sunday at San Francisco -- albeit, a much worse rushing matchup.

Texans RB David Johnson (quad) is inactive for today’s game vs. the Chargers. Rex Burkhead should operate as Houston’s clear lead back, with Royce Freeman as the #2.

Johnson not expected to play Week 16

Texans RB David Johnson (quad) is not expected to play vs. the Chargers today, per NFL Network's Ian Rapoport. That'll leave Royce Freeman as the #2 RB behind Rex Burkhead.