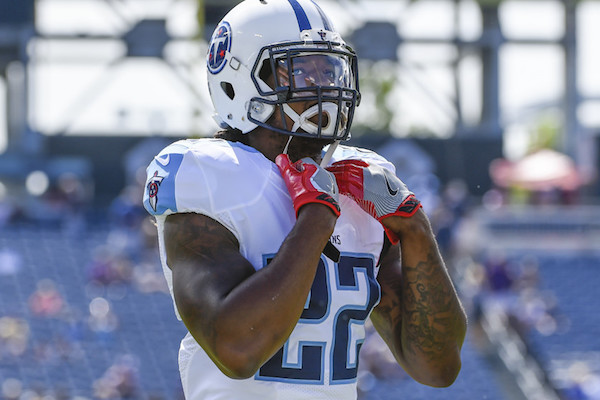 Week 8
Henry rushed 28 times for 68 scoreless yards in the Titans' Week 8 overtime win over the Colts.
Henry was completely bottled up by a Colts rush defense that quickly plugged up holes and didn’t let Henry break off any long runs.
Henry was injured early in the first quarter, had foot surgery on Monday morning and will most likely miss the rest of the season.
The Titans added veteran RB Adrian Peterson and will possibly give a few extra carries to Jeremy McNichols.
Week 7
Henry rushed 29 times for 86 yards in the Titans' Week 7 win over the Chiefs and also threw a 5-yard TD on the Titans opening drive. He also added 2 catches for 16 yards in the passing game.
Henry was largely bottled up as he couldn’t even muster up 3 yards per carry against one of the league’s worst rush defenses.
Henry did save his fantasy day with a short TD pass in the 1st quarter where he pretended to run up the middle and then threw a jump pass to a wide open MyCole Pruitt.
Henry had a long run of just 11 yards and couldn’t get anything going, especially in the 2nd half as the Titans nursed a multi-score lead.
Henry will again be leaned on heavily in a huge division matchup against the Colts in Week 8.
Week 6
Henry was bottled up by the Bills defense the whole first quarter. Then Henry flipped the script on the game, breaking a 76-yard run for a TD in the 2nd quarter where he showed off his elite top-end speed, running away from every defender on the Bills. He reached a top speed of 21.8 MPH, a career high for Henry. This offense relies on Henry, and he continues to produce. He was able add 2 more rushing TDs in the second half as the Titans were able to pull off an impressive win over Buffalo. Henry finished the game with 20 carries for 143 yards and 3 TDs. He added 2 receptions (on 3 targets) for 13 yards.
Henry continues to a have huge lead on the rushing yards list this season. He is in 2nd place overall with his yards after contact, and the guy is on pace to have another historic season. He is our overall RB1 this weekend against the Chiefs. The Chiefs’ rushing defense has improved over the last 4 games, they have held opponent RBs to 258 rushing yards and only 1 TD. However, Henry is averaging 145 rushing yards per game over the last 5 weeks and has added 10 rushing TDs over that span. He has been unstoppable lately and the Titans offense goes through Derrick Henry. The next three games on the schedule for the Titans are KC, @IND, and @LAR. We have Henry at PPR RB3 for the rest of the season.
Week 5
Henry rushed 29 times for 130 yards and 3 TDs in the Titans' Week 6 win over Jacksonville.
Henry continued his dominant season with 28+ carries in 4 of 5 games. He’s exceeded 100+ rushing in 4 straight games and easily leads the league in rushing yards on the season.
Henry is an every week top 3 RB play. The Titans get the Bills in Week 6 on Monday Night Football.
Week 4
Henry is like Thanos, the man is inevitable. With one snap of his fingers, Henry turns 33 carries into 157 yards and a TD. Many people were worried about the change in OC, but it looks like Todd Downing understands that you ride Henry as much as you can. The bigger factor for Henry has been his pass game usage this season. Yes, this week he only saw 2 targets, but that was his season low. For context Henry only saw over 2 targets 4 times in 2020.
This week Henry takes on the Jaguars, who he has owned in his career. Last season Henry had a 200-yard rushing performance vs. Jacksonville and in 2019 he topped 150 in a game. We hope the Titans can get back one of Julio Jones or A.J. Brown to give a boost to the offense, but either way it doesn’t really matter for Henry.
Week 3
Don’t look now, but Henry can catch the ball, too. And Tennessee is finally willing to throw it to him.

Henry entered the season with a career high of just 19 receptions (in 2020). He now has 12 catches through just 3 games, among 13 targets.

Henry added 3-31 receiving on 3 targets in Sunday’s win over the Colts to a solid 28-113 effort on the ground. He didn’t score a TD -- leaving Ryan Tannehill to throw for all 3 of those in the game -- but did punch in a 2-point conversion.

If you drafted Henry in Round 1, smile at his enhanced passing-game usage and keep him glued to your lineup.
Week 2
Derrick Henry absolutely blew up in Week 2, scoring over 44 points in half-PPR. Henry did what Henry normally does, taking 35 carries for 182 yards and 3 TDs. More encouraging was his passing game usage. Henry saw a career high 6 targets, securing all 6 for 55 yards. This marked only the 4th time in his career that he has gone over 50 yards receiving in a game. Is this a fluke? It might not be as Henry ran a route on 21 of 45 (46%) Tannehill drop-backs.
Heading into Week 3, Henry is a clear auto-start in season-long leagues but could be solid DFS play after rushing for over 100 yards in both games vs. Indy in 2020.
Week 1
Week 1 was awful for Henry, who rushed for 58 yards on 17 attempts. Last season Henry failed to eclipse 60 rushing yards only once. If you want a positive to take away from this game, Henry saw 4 targets in Week 1, a number he matched only twice a season ago. If Henry can see even a slight uptick in passing volume, his potential in any sort of PPR format is raised even higher. Going forward, Henry remains among the elite options in fantasy. Call Week 1 a blip and move on. Next up is a meeting with Seattle.

Henry is coming off the 8th 2,000-yard rushing season in NFL history and easily leads the league in carries, rushing yards and rushing TDs over the past 2 years. Despite underwhelming receiving production, he’s finished as a top 5 RB across fantasy scoring formats both years. Aaron Jones is the only other guy who can say that.

Henry should again be the focal point of Tennessee’s offense in 2021 and is the best carry bet in the league. (We project him for over 30 more carries than anyone else.) While the volume of carries he’s handled over the past 2 seasons is a slight concern, Henry has proven super durable and is still only 27.

The loss of OC Arthur Smith is a concern, but the addition of WR Julio Jones is exciting. This should remain an efficient offense, leading to plenty of scoring opportunities for Henry.

Titans RB Derrick Henry (foot) is officially active for today's Divisional Round game vs. the Bengals.

Henry set to play vs. Bengals

Titans RB Derrick Henry (foot) has been activated from IR, putting him on track to play in Saturday's Divisional Round game vs. the Bengals. Henry has been out since suffering a Jones Fracture in his right foot on Halloween. He had surgery a couple of days later and will be playing with a steel plate in that right foot. Henry's role and effectiveness is the biggest question mark of the weekend.

Titans RB Derrick Henry (foot) participated in a padded practice on Tuesday. He still hasn’t been activated off IR, but that’s the expectation ahead of Saturday’s game vs. Cincinnati. "I felt great," Henry said Wednesday via ESPN. "I just wanted to get some pads on. Haven't had them on in a while and got some contact going.” Henry’s last appearance came back in Week 8.

Titans do not activate Henry

The Titans did not activate RB Derrick Henry (foot) from IR on Saturday, which means he won't play in Sunday's finale against the Texans. That locks in D'Onta Foreman as the lead back in a high-upside matchup. Henry appears on track to return for the playoffs. If Tennessee beats Houston, the Titans will get a 1st-round bye.

Titans RB Derrick Henry (foot) has been designated to return from IR. That means he'll be back at practice this week. We'd be surprised if Henry played vs. the Texans on Sunday, but he seems to be on track to return for the playoffs. He's now 9.5 weeks removed from suffering a Jones Fracture to his right foot.